8/18/2018 – I have spent many hours walking the Sawbill dirt road, hiking rustic trails that snake through the surrounding woods. From old logging roads to over grown, out of season cross country ski trails, there is always a surprise, a mingling of history, waiting for you at the end of the rainbow. As I take my evening stroll, the sunset like a watercolor painting stretched across the sky, my mind is transported back to a time that I can only imagine, one I have not lived but have created from the structures or photographs I have seen. I try to conjure up an idea of what Sawbill was like in the 1930’s. What was it like to eat in the timbered dining hall fueling up before a day paddle? What was it like to work for the Minnesota Conservation Corps and to live at the old camp nestled in the National Forest? As I walk I wonder, I absorb. These remnants hold stories, waiting for me to contemplate, to ask the right questions and to slow down and sit and listen to what they have to share.

“U NO U R AT SAWBILL!”, the first clue guests were granted as they turned up the lane for their anticipated vacation, this sign being as much an integral part of the lodge as Uno, the water wheel cranking creek dweller. I imagine people laughing, infected by the delight of a deserved respite from the doldrums of everyday life, clinking glasses at the bar (the stools of which are sitting in the crew housing), music gliding on the breeze and the warmth of summer sun kissing lake bathers. I think of my grandparents, Gertrude and Carl, who would drive up the shore every month for a getaway, treating themselves to a stay at a place such as this. My Grandmother’s dark curls bouncing as she skips rocks. My grandfather’s stoic countenance melting away as he looks out at the water. Vacations had such a different air to them.

I read about the abundance of gimmicks at the Sawbill Lodge and about the regulars who became more like family.

The lodge was closed for the season in 1942 due to hardships caused by the war (specifically the ration of gasoline, preventing anyone from travelling up the shore). After the war ended the lodge reopened and saw its heyday in the 1950’s. Card games were arranged for post dinner entertainment, the owner (jean) circulated the room to gauge what lodgers wanted to do the next day and arranged guides and fishing locales for them. Bears also granted guests entertainment. Remains of dinner were placed outside the porch and folks would sit in wait and watch as bears would devour the food. If watching giant, sharp toothed mammals wasn’t your cup of tea you could spend time in the sauna or read a book from Jean’s impressive library. Oftentimes there was special entertainment such as a slide show or talent show. Once a summer guests were loaded up into motor boats and brought to an island for a dinner picnic.

When the area became a protected wilderness in 1978 a bill was passed that all structures be sold for removal in order to return the area to its natural state. The last year of operation for the lodge was 1982.

The lodge now sits on highway 61 and has been renamed Solbakken. My evening walks guide me to the grounds of the old lodge. All that remains are moss covered stairs and fragments of the stone foundation. However, memories and photographs keep buildings alive even after they are gone and the stories we are told gives immortality to these cherished places.

I was tipped off by fellow crew member and human with a wealth of knowledge concerning many subjects, Mongo, about an old shack buried along a cross country ski trail that used to hold dynamite. What in the heck was the dynamite used for? When they were putting in the Sawbill Trail they used the dynamite to clear the way for building. The shack is composed of thick concrete walls, rusted orange exterior and a roof top that comes to a high point. The roof is shaped that way for a reason. If the dynamite tucked inside were to explode, it would (hopefully) shoot straight through the top versus through the walls, out the sides, into the trees…disaster would ensue! 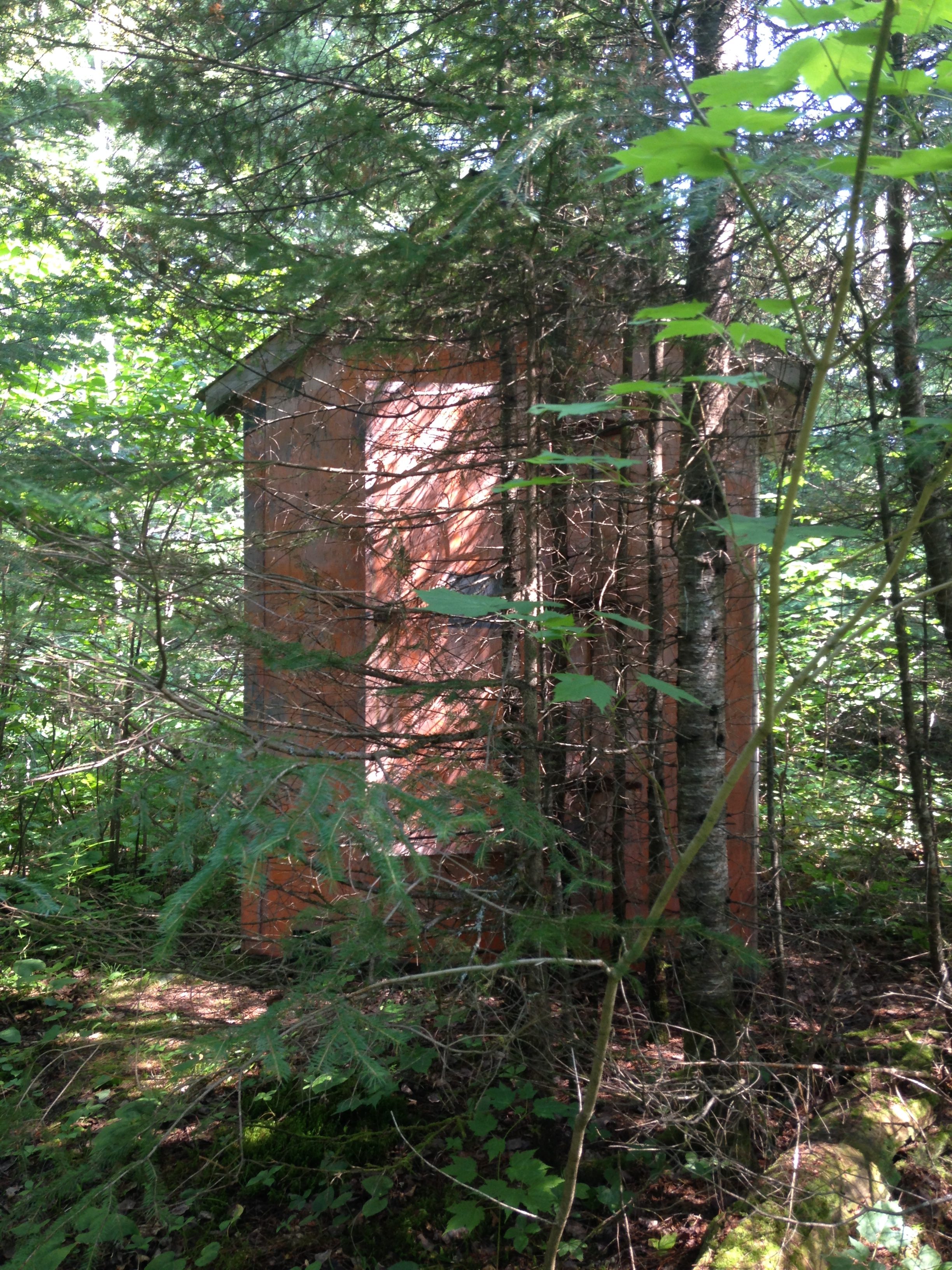 Running, jumping over downed trees and Yarrow dusted forest floors, I ventured out in search for the shack. An avid explorer, especially when historical buildings and stories are involved, I excitedly pranced down the trail on hunt for this destination. The orange structure, veiled by saplings and leaf adorned branches, subtly came into view. I felt a pang of nerves as the stillness lay around me, my hand reaching for the concrete slab of a door, hoping to glimpse inside. A young tree inconveniently was growing just close enough that it prevented the door from opening and me from further exploration. With a sigh of relief and quenched curiosity I slowly made my way home, pleased with the afternoon. It was an excellent excuse to get outside and in the woods (as if I ever needed one).

The Civilian Conservation Corps was founded by Franklin D. Roosevelt  in 1933. Roosevelt wanted to pull America out of the ruin of the Great Depression and the CCC would help employ the young men in dire need of work in order to help a country in dire need of help.

There were 13 camps in Cook County, MN, including 3 different camps located along the Sawbill Trail. The workers thinned brush and unwanted plants around trees to help maintain growth. They prepared sites for the planting of new trees and groomed portage trails, built campgrounds and took census of wildlife.

The Sawbill Civilian Conservation Corps Camp was abandoned and dismantled before 1957 but the work that they accomplished is apparent and appreciated.

Nothing remains of the old CCC camp but there is a sign honoring the work accomplished. But camp remains are not the only way we can remember all of the hard work these young men put into our beloved wilderness areas. Trails, campsites, the trees you walk among. All of these are signifiers that people before us were guarding and ensuring the longevity of the Boundary Waters, for those of us who have come after to continue to enjoy and to care for.

I have not yet had a chance to visit the site, but that is next on my extensive list.

~Do you remember visiting Sawbill when these structures were still standing and utilized? Do you know somebody who worked for the Minnesota Conservation Corps or spent a special, romantic weekend at the Old Sawbill Lodge? Do you know of other spots that I missed? If you would like, please share with us. We would love to hear your stories!

For more information about the past of Sawbill and the surrounding areas check out Sawbill: History and Tales by Mary Alice Hansen, copies are carried in our store.