3/27/98 – Bill Hansen is just back from a trip to St Paul to lobby the Minnesota Legislature on behalf of the BWCA Wilderness. Bill participated in a training session for citizen lobbyists and then spoke at a rally in the capital rotunda. Almost a third of the legislators have become co-sponsors on a bill that would protect Seagull Lake from anti-BWCA Wilderness bills currently before the Congress in Washington, D.C. On the state level and the federal level, current or stricter protection of the BWCA Wilderness enjoys broad public and legislative support. In both arenas however, key committee chairs who oppose wilderness are working political mischief. If you are from Minnesota, contact your state legislators and ask them to co-sponsor the
Morse/Tuma (SF. 3400, HF. 3844) legislation that protects the BWCA
Wilderness from increased motorboat use. You can find your reps easily at
Minnesota State Gov’t – Gov/Senate/Reps (via Vote-Smart) 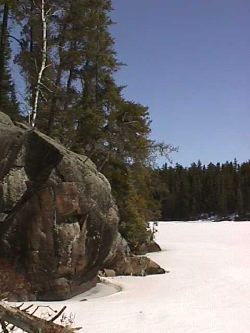 3/17/98 – Pete Cummings and the Consortium (not a rock band) returned from their annual winter camping trip yesterday. These four gentlemen, along with several others, have been Sawbill wilderness campers for more than twenty years. The core group originally met in graduate school while earning their M.B.A.s. After many canoe trips, the group now returns in March to enjoy the solitude offered by the BWCAW in the winter. This trip, they only met one other group on the trail – two men who are in the M.B.A. program at the University of St Thomas in the Twin Cities. Surely Alton Lake was the most unlikely spot in the world for a meeting of six M.B.A.s that day 🙂

Bill Hansen returned late Sunday night from his speaking appearance at the Canoecopia show in Madison, Wisconsin. He saw many old friends there, including customers, fellow outfitters, suppliers, and former crew members. The highlight was seeing Larry Mathison, who drove up from the Rockford, Illinois area. Larry has been a Sawbill camper since 1964, with many adventures to remember. Confined to a wheel chair by heart problems now, Larry was clearly enjoying himself in the crowd of paddlers.


3/12/98 – Transitions and travels are the rule here recently. Mary Alice Hansen, co-founder of Sawbill Outfitters, attended her last Tofte Township meeting as Town Clerk. She has held this crucial elected office for many, many years. In the Minnesota Township system, Town Clerk is as close to being mayor as you can get. The Clerk does most of the hard stuff, keeping minutes, filing state reports, organizing the elections, and much more. Mary Alice received a plaque and many testimonials to her faithful service.

John Oberholtzer, Sawbill’s faithful year ’round employee, is vacationing in southern Utah. He is spending three weeks backpacking in the red rock canyon country there. Several former Sawbill crew members are joining him for various lengths of time. They are Steve and Kate Surbaugh, Mike Gaud, and Will Decker.

Sawbill’s Bill Hansen will be speaking at the "Canoecopia – the world’s largest paddlesport exposition" in Madison, Wisconsin this weekend. His topic is "Living Off The Grid – Kids In The Wilderness" but it is hard to stop him from discussing BWCA Wilderness politics 🙂


3/9/98 – Craig Cornwall, from the Detroit, Michigan area, was here for a quick two night camping trip this weekend. Craig mentioned that he estimates this to be his 35th trip to Sawbill. That is an impressive record for someone who drives almost twenty hours to get here.


One of the most common questions we get in the summer is "What do you do all winter?" While we often jokingly respond with something like "as little as possible," it seems like the reality is a season full of varied activities. This year, the cross country skiing has been exceptional. The lakes are once again in prime condition for ski-skating. On Friday night, the quarter moon was ducking in and out behind fast moving clouds. On the lake, large pools of moonlight were silently traversing the broad white expanse. Skiing hard, one could just overtake these traveling pools of light, ski through them and then pursue the next one through the moon shadow. Soon the usual landmarks of bays, points and hills were forgotten and the miles slipped away while gliding effortlessly through a sparkling, featureless white plain suspended in an endless sky.


3/3/98 – Winter has returned to Sawbill after taking the month of February off. Between temperatures in the 40’s and the most rain we’ve had since summer, it has been a very nice April this last month. Last night after dark it dropped quickly below freezing, brought in by a steady north wind.

A late night ski up Sawbill brought the sweet smell of wood smoke to the nostrils about two miles north of the landing. Rounding the corner into Kelso bay a campfire and a glowing red tent appeared across the bay. The spot of warmth looked very cozy in the midst of the freezing black night. Skiing south again with the wind behind, each step brought a glide of at least twenty feet. Although the overcast caused almost total darkness, the snow surface was so smooth that no head light was necessary. The wind speed and ski speed were almost perfectly matched, creating a weird, sensory deprived feeling. The hiss of the skis on the snow the only clue of forward progress.

This morning, Cindy and the kids had their first Spring moose encounter on the way to school. The freeze/thaw cycle has produced a heavy crust on the 16" of snow standing in the woods. The moose that discover the plowed Sawbill Trail are very reluctant to get off the road, even when confronted by a large green truck. The bull this morning even became a little aggressive, trotting toward the truck with his fur standing on his back and his ears laid flat. After twenty minutes of alternately trying to scare it and backing up at a high rate of speed, Cindy called Bill to bring in reinforcements. The pickup approaching with the plow down, producing a cloud of snow proved too much for Mr Moose and he beat a retreat to the hills. Carl and Clare missed the first half hour of school, but their teachers are understanding about their unusual commute.