Thought you might enjoy a column I wrote for The Grant County Herald
following our trip to Cherokee Lake in late August. We really enjoyed
our trip to Sawbill and hope come come back many times.


Portage is a French word for torture.


My wife, son and two of our friends just
returned from our first extended stay in
Minnesota’s Boundary Waters Canoe Area. On
Tuesday morning we “put in” as they say up
there, on Sawbill Lake, 24 miles north of Tofte.
Putting in consists of putting your canoe in the
water and loading it with everything you are
going to need for the next couple of days. Each
item was carefully selected, but still we were
dismayed at how much stuff we had in our two
canoes. But they were riding well in the water
and we pushed off, saying good-bye to our
cars, electricity, running water, Coke and
“civilization.”


The wind was against us as we paddled six
miles to the north end of Sawbill Lake. The two
hour trip was exhausting but we were still
enthusiastic and excited to face our first portage,
an 80 rod trek to Ada Creek.


Map makers traditionally use rods instead of feet
to describe the length of portages. They do this,
I now realize, so the trusting fools who
approach the easy sounding 80 rod portage
don’t realize it is really a formidable 1,320 feet!


The weight of what we brought with now
became very real to us. As we loaded up with
tents, sleeping bags, clothes, rain gear, food and
of course the canoes themselves, we realized at
least two trips across the portage would be
called for. Two trips across, loaded with gear,
meant at least one trip across empty … three
trips in total. Our 80 rod portage had now
become 3960 feet!


Of course this was only the first portage, there
were three more before we would reach our
destination at Cherokee Lake. The first portage
was not only the shortest, it was also the only one
across level ground. Portage number two was
hilly and narrow enough to challenge a mountain
goat, number three, which was supposed to be a
10 rod stroll between Ada and Scoop Lakes,
was lengthened to 110 rods of rocky, muddy
and potentially ankle-breaking creek bed.


The final portage was 180 rods and went over
the Laurentian Divide which divides the Hudson
Bay and Mississippi River watersheds. Oh, by
the way, did I mention it was hilly?


Finally, after eight and one-half hours, we
paddled down Cherokee Creek into what has
been called one of the region’s most beautiful
lakes. Cherokee Lake didn’t disappoint in that
regard. Unfortunately we were so exhausted we
didn’t have much time for sight-seeing as we
sought out a island campsite and set up camp.


That evening there was a gorgeous sunset,
impossibly black star-studded sky and the
flickering of northern lights. Later wolves
howled and loons’ haunting calls echoed up and
down the lake. We could have seen and heard it
all had we not been so stiff we couldn’t move
from the campfire.


Before the sun rose the next morning my wife
made me leave my comfortable sleeping bag for
an early morning paddle. Stiffly I crawled into
the stern of the boat and we pushed off. We
found ourselves on a mirror still lake, mist
clinging to the shore as a struggling sunrise cast
the scene in a soft glow. The stiffness in my
neck, shoulders, back and legs began to melt
away as we drifted past small islands, and huge
granite outcroppings, trying to keep as silent as
possible so as not to disturb the reverential
atmosphere.


“This is it,” I said to myself. “This is what the
experience of the Boundary Waters is all about.”


Our trip back a few days later was, if anything,
even tougher than the one going in. Our muscles
were still stiff from the first trip and the six mile
paddle up Sawbill Lake was not only against an
even stiffer wind, it was in the rain.


But through it all, I remembered that morning on
Cherokee Lake, how clear and soft the water
was, as we dipped our paddles, how the jagged
granite and pointed pines contrasted against the
gentle pink sunrise, how a loon’s call would
echo for miles.


We’ll be back. Shorter and fewer portages for
sure, rice cakes instead of spaghetti, but we’ll be
back. The Boundary Waters experience is
impossible to forget.

9/25/98 – We received the following email from Dave Hart of the "Bloody Knees Canoe Club":

Hello Sawbill!
Yes it’s been over a month since our adventure in the BWCA this year.
We really enjoy reading your newsletter, and wanted to share our
experiences with you. The website (http://home.att.net/~davehart) has
been updated and has two accounts of our trip (one very very brief, and
Scott’s rather long diary). We also have many pictures (many more will
be added too) from this year as well as the Routes page. We never did
get an “after” shot of our knees when we came back. I’ve included three
pics you might enjoy–“BKCC before”; “BKCC after”; and “the youngest
Bloody Knee”.

Again, we had a wonderful time and we want to thank you for providing us
with gear and friendship. We look forward to seeing you again next
summer.

9/22/98 – We had a visit yesterday from Bill Janelle. Bill lived at the Forest Service cabin here at Sawbill in the summer of 1942, when he was six years old. His father, Harley Janelle, worked for the Forest Service. Due to WW II gas rationing, the family was posted at Sawbill, nearer to the work site. Bill has many fond memories of that summer, and was delighted to find the cabin intact and well cared for. Bill, along with his mother Marie and younger sister Harlene, moved to Tofte when school started. The family lived in Schroeder, near the Temperance River, and Bill attended first grade at the old Tofte school. In the spring of ’43 his father was transferred to the Pleasant Hill Ranger District near Clarkesville, Arkansas. Bill and his wife Dottie now live in California. He is retired from a career in the military. 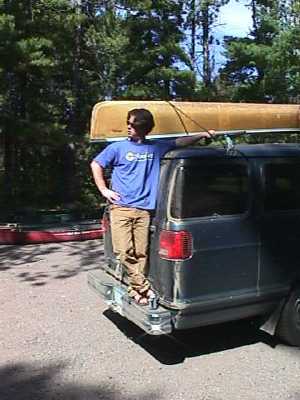 9/19/98 – Looking back on the past four years, Jeff Thompson prepares to perform his final transportation, as a Sawbill crew member. Jeff is one of our senior crew members who won’t be returning next year. The last day is a poignant one for all of us. I have seen Jeff depart for countless driving trips, and over the past four seasons of work and play, he and I have become good friends. We go through a bit of withdrawal when the crew leaves. After living, eating, and working together a sense of family develops. When a crew member leaves forever, it is like sending a kid to college. We’ll really miss Jeff. His easy going manner and sharp wit, set the tone for younger crew members, helping to nurture the typical laughter and laid back spirit that prevails at Sawbill. Several of our staff are considering options next summer that will begin to track them into a career. We encourage them, but take solace in the fact that many of them delay those decisions, once they are away from the Northwoods for several months. I have hope we will see Jeff, Michele, or Annie again. I understand their eagerness to discover the work life has in store for them, but I caution them to not feel too urgent. So many of our former crew members wonder from their settled perspective, why didn’t they just put in one more season of paddling and exploring in the Northwoods? If next year Jeff drives you to your wilderness lake, let him know what you think of his decision to return. Some of our greatest wilderness advocates and thinkers spent their youth working at wilderness edge businesses. The people they met and experiences they had, impacted their entire lives. We have to give ourselves time to learn from each phase of life, otherwise, we are frustrated, when we later learn that the ideals and virtues of one time were on the mark and should have been more closely heeded.


9/18/98 – The warm weather seems to have arrested the colorization of foliage. It remains beautiful, with about 40% still green. The balmy temperatures are slated to disappear after this weekend. The return of Fall should speed things along. I like to picture the snow line moving south every day. It isn’t all that far away now 🙂


9/15/98 – We received the following email from John Hawn in Iowa yesterday:


Your notes of 8/26/98 express the feeling of the BWCAW to me more than
most. "…silence covered us like a blanket." I remember hearing an
individual leaf softly "crashing" branch to branch to the ground on a
particularly beautiful autumn evening in the BWCA a few years ago. Keep
up the great work.


John also sent us the link for a good satellite photo of Sawbill and the surrounding lakes. Thanks John.


9/12/98 – This morning we were treated to what has become a rare sight. Gray skies filtered the light from the rising sun. Gauzy fog drifted among the brilliant trees, leaves rainslick, shining, and vivid. For a few moments the world was an impressionistic masterpiece. Daubs of color blending to form exquisite shapes – wild and dreamlike. Then as the light intensified, they transformed into the familiar landscape of our daily surroundings.


9/10/98 – The weather continues to be perfect. Perfect for wildfire too, unfortunately. I had the great fun of flying in the Forest Service’s 1956 DeHavilland Beaver bush plane on Tuesday. We flew over four fires, but the most interesting was the Bluejay fire, located north of Hazel lake and east of Polly Lake. This fire was started by lightning on July 14th and is still burning. It is only ten acres or so in size, but in the last few days it has burned across a swamp and entered the heavy timber. The Forest Service feels that a warm windy day could turn Bluejay into a significant fire.

The flight over the BWCAW revealed many hillsides of blazing color as the combination of drought and light frost at night have jump started the Fall season.


9/7/98 – Beautiful, cool September weather has returned. The underbrush is starting to get pretty colorful. Within the next two weeks the trees will explode with vivid reds and yellows. The air already has the magic elixir smell of Fall. Waves of warblers and other small birds are passing through on their way south. Their presence is a subtle beauty – tiny flashing gems in settings of colorful leaves.


9/5/98 – Labor Day weekend is hard upon us. The store is full of families at this moment, excitedly preparing for their canoe adventures in the BWCA Wilderness. In three short days it will be back to school for most of the kids and back to work for the parents. The gorgeous weather that we have come to take for granted is continuing for this holiday weekend. If the weather pattern doesn’t change, we will be rivaling Hawaii for climatic beauty.

Edwin and Richard Millard are here from Chicago and Alabama respectively. The Millards started camping at Sawbill in 1952. Lee (Millard) Stewart is working here this summer. Edwin is her father and Richard is her brother. Richard has donated two signs that he picked up when the Forest Service changed from steel signs to wooden signs in the early 60’s. He has kept them all these years and has now donated them to be hung on the wall in the outfitting building. There are, of course, no signs (or lookout towers) in the wilderness now.