5/31/99 – Another busy, yet uneventful Memorial Day weekend
has passed. The weather was excellent until this morning. Hot,
sunny and windy weather helped keep the black flies in partial
retreat. They peaked a little bit early this year and should be
steadily declining over the next couple of weeks. As soon as the
dragon flies emerge the black flies disappear within a few days.

5/28/99 – Craig Cornwall is a fanatic for wilderness canoeing.
In addition to countless trips in the BWCA Wilderness, he is a
veteran of many arctic river trips, hunting expeditions, and winter
camping forays. Craig told me once that he was on the water in
a canoe 90 days each year. That was before he and his wife, Georgeanne,
became parents of three beautiful children. Craig’s canoe time
diminished a bit for a few years. Now, he is back with all three
kids, all happy as clams in the height of black fly season, protected
by oversize bug shirts. 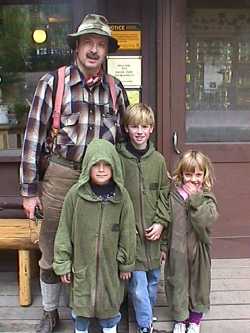 5/27/99 – Brian and Eric Tofte were up fishing the other day. It is a pleasure to watch these two North Shore natives fish. Eric, who is 10, outfished everyone else 4 to 1. Both Brian and Eric betray their fishing lineage. They seem to think like a fish, which is not surprising when you consider the countless generations of Norwegian fisher folk from whom they descend. 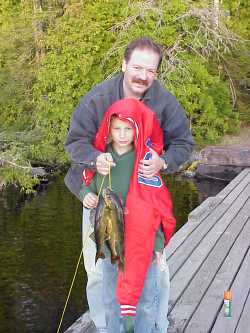 5/21/99 – An inch of rain has returned water levels to good early June levels. It has also encouraged the black flies to make their appearance. They are only bad in certain places right now and haven’t really started feeding in earnest yet. Fishing, which had been excellent during the first days of the season, took a dive yesterday while the front moved through. It should be better today with the rising barometer. Last night, a heavy fog rolled in after dark, some fisherman on Crescent Lake became completely lost in the white world. Even the voices of people on shore were difficult to follow, due to the dense fog and disorientation. One of the people on shore had a powerful laser light, capable of piercing the fog and leading the confused anglers home.


5/17/99 – Kyle Kondrat, from Gross Pointe Farms, Michigan, age 11, was on the scene at Sawbill for only few hours when he and his dad decided to do a little fishing right in front of the campground. As they were trolling a floating Rapala to their intended fishing spot, Kyle landed a two pound lake trout. This is noteworthy because Sawbill Lake does not contain lake trout. A year ago, the Minnesota Fisheries folks were using the Forest Service airplane to stock lake trout in some remote lakes. As they were loading the plane, a bucket tipped over and spilled half a dozen lake trout into Sawbill. The fisheries biologist said, "Don’t be surprised if someone catches a lake trout in the next few years."


After landing the lake trout, Kyle put his line back in the water and immediately caught a 7 lb 9 oz walleye. 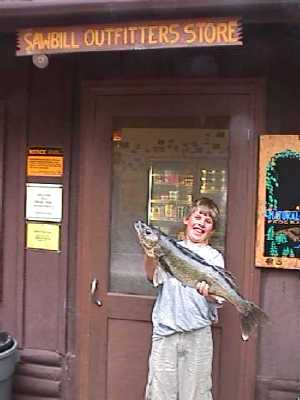 5/16/99 – The opening of fishing was laid back as usual here at Sawbill. The days of the frantic fishing fanatics whipping the water for the really big ‘un seem to be permanently gone. They have been largely replaced by relaxed wilderness seekers who wet a line as part of their total experience. The only fishing reports we received were from Pat Precord who stopped over from Crescent Lake to pick up more bait (a good sign).


5/10/99 – The most appropriate entry for today would probably be: "Worked all day – much more to do." This is the time of year when we don’t see too much except whatever is immediately in front of us. With just a few weeks between winter and summer, several months worth of work need to be done in a few weeks. Compounding the problem is the lack of help (most of our employees are college students) and the usual springtime activities of the resident Hansen children (school programs, recitals, etc.). Although it seems hopeless at times, we have survived for the last 42 seasons and I expect we will survive this one. Actually, help is at hand with the arrival today of Laura TerBeest, our first seasonal employee.


Even as we scurry between buildings, nature puts on a show for us. Yesterday, I heard the lonesome screech of an eagle and looked up to see a graceful aerial ballet between a mature bald eagle and a harassing raven. Why the huge eagle seems so intimidated by the raven is a mystery to me.


5/8/99 – The weather has suddenly become much more seasonable. We have received more than an inch of rain in the last three days and the temperatures are now spring-like. The Forest Service recorded the highest fire danger index in anyone’s memory early in the week. Now the fire fighting crews are putting the equipment away, enjoying some comp time, and planting their gardens. – Bill


5/4/99 – We’ve received three comments via email on OB’s chilly plunge pictured below. First, Sawbill’s Poet Laureate, Ed Dallas wrote, “Was that picture taken on the way in, or the way out? How cold is that water?” Next, Jeff Reihle, wrote, “One word – shrinkage!” Finally, Jan Morovac commented, “I’ll bet OB was singing tenor for a week after that.”


5/1/99 – Dramatic events in the sleepy little town of Tofte yesterday. A wildfire was discovered about 2:30 PM along the Superior Hiking Trail two miles north of town. The U. S. Forest Service fire patrol airplane arrived within minutes and began water bombing the hot, two acre fire on both sides of a high maple ridge. The unusually calm day allowed the pilot to scoop water directly from Lake Superior. Soon a small crowd formed in the beautiful Tofte Town Park to watch the plane do its work. The white and red 1950’s vintage DeHavilland Beaver would come banking in low over the lake shore, skim gracefully down to a landing and immediately apply full power while opening trap doors in the floats to scoop up water. The big 550 horsepower rotary engine caused windows to rattle and spectators to cover their ears. Water would froth violently ender the plane until the tanks were full and the vintage aircraft would lift heavily off the water, bank sharply toward the hill, and head for the fire. Lake Superior was creating a thin haze as the cold water met the unseasonably warm air. This distant haze erased the hori zen, having the effect of framing the sunlit bush plane in a palette of pastel blues and grays. The fire was easily extinguished, thanks to the almost windless conditions. – Bill