9/30/99 – We had a visit from Bev Hagar (nee Wine) the other
day. She thinks that Wine Lake may be named after her. In 1945,
her boyfriend took a Sawbill canoe trip and visited a beautiful
unnamed lake. When he returned, he told Bev that the beautiful
lake reminded him of her, so he named it after her. She had forgotten
this until she saw her old boyfriend again at their 50th high
school reunion. Her father had died in a swimming accident in
1945 and this tragedy drove many other memories out of her mind.
Her son and a friend decided to take Bev to Wine Lake for her
70th birthday present. She did say that her ex-boy friend was
an eagle scout, so "he may have named the lake after me,
or it may have already been named Wine Lake and he just took advantage
of that fact." We have a map from 1928 and Wine Lake was
not named then. Ms. (Wine) Hagar did transfer a bottle of good
wine into a Nalgene bottle to toast her 70th birthday on Wine
Lake. 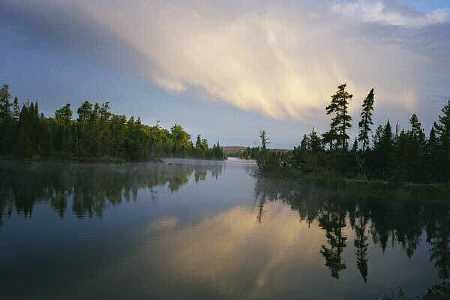 John Abbott sent along this picture of his son Dave. He says
they took to calling him "Trooper Dave" and you can
clearly see why.

9/29/99 – I spent a pleasant morning fishing with Duluth News
Tribune outdoor writer Sam Cook. Sam and I enjoy fishing together
because we are both content to enjoy a beautiful day and not worry
too much about catching fish. That was indeed the case yesterday.
It was a glorious, warm, windless day. The colors were brilliant
gold against a flawless blue sky. We did each catch a small perch,
but not the chunky Rainbow Trout we were hoping for.

David Armstrong sent along these pictures of his daughter,
Danielle, admiring ancient rock paintings and displaying a trophy
fish. The Armstrongs, who live in Silver Springs, Maryland, enjoyed
a two week BWCA Wilderness trip at the end of August. 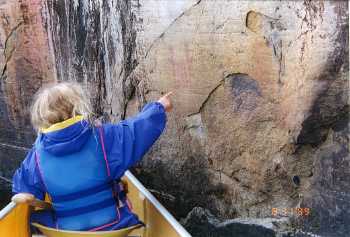 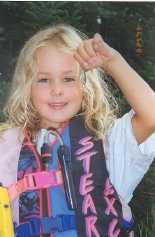 9/25/99 – As the days shorten and the cross country ski season
draws nearer I frequently run long distance after dark. This week
I have been enjoying clear skies, brisk temperatures and a waxing
moon. One night, I surprised a moose (or vise versa) who was standing
about twenty feet off the road. She gave a startled snort and
then started running through the woods parallel to my course.
In the dark, she was crashing through the underbrush at an alarming
rate. It’s amazing what a large dose of adrenaline can do for
your running speed.

Last night, I was about four miles down the road, when a sound
stopped me in my tracks. A pack of wolves was howling under the
huge pie plate of a moon. They seemed to be located roughly a
half mile ahead of me and slightly to the east. In spite of my
rational mind thinking how beautiful and sublime the moment was,
my brain stem was sending a tingle of fear into my stomach. I
was planning to run another mile, which would take me on almost
a direct course toward the pack. I briefly considered turning
back, but decided it would be much more exciting to continue with
the chance that I might actually see the pack under the moonlight.
I thought of Sig Olson’s famous essay about being surrounded by
a wolf pack while hiking alone, at night, on the Kawishiwi River.
I also thought about the ability of a wolf to break a moose femur
in it jaws. That inevitably led to thoughts of the occasional
mountain lions that are spotted near here.

Ultimately, the remainder of the run was uneventful, although
a few well placed shadows raised my heart rate from time to time.
Today, in the daylight, I’m grateful for the presence of these
awesome predators in our shared ecosystem. It reminds me that
human beings do not have exclusive dominion of the night woods.
There are beings out there that are smarter, faster, and far more
at home than I.

Yesterday morning, Minnesota Public Radio’s "The Morning
Show" with hosts Dale Conelly and Jim Ed Poole, broadcast
live from the North House Folk School on the harbor front in Grand
Marais. Observant listeners (The morning show is heard over 29
stations in 7 states and on the web a www.mpr.org) may have recognized
yours truly as one of the judges of the stone skipping contest.
The judges used the aliases of Larry, Curly and Moe to protect
their anonymity. The Morning Show visit was a kick off to a capital
campaign that will bring two new MPR stations to Grand Marais.
Visitors to the area will be able to listen to this fine radio
service at 88.7 and 89.7 FM beginning in November of 2000. – Bill

9/22/99 – The Forest Service has announced an increase in the
BWCA Wilderness permit reservation fee for next season. The $9
fee that goes to the private contractor running the reservation
system will rise to $12 next year. The $10/person user fee which
is used by the Forest Service to fund their work within the wilderness
will remain the same. In another change, the user fee will not
be collected in full, as it is now, when the reservation is made.
Instead, a standard deposit of $20 will be taken when the reservation
is made and the balance will be due (or refunded for solo trips)
when the permit is picked up. In other words, every reservation
will require a $32 payment next year ($12 reservation fee + $20
deposit on the user fee).

The private reservation service, ReserveAmerica, provided very
poor service this year. Many mistakes were made, their website
is slow and confusing, and phone calls often involved 20 minute
holds accompanied by some of the worst canned music imaginable.
The Forest Service assures me that the problems will be addressed
during the off season and next year will be better.

9/21/99 – We had our first snow flurries yesterday. It froze
hard last night with a low of 27 F. The fall colors will reach
their peak sometime this week, probably during the full moon this
weekend.

9/20/99 – Scraped ice off the windshield for the first time
this morning.

with each paddle stroke

a whirlpool spins and fades

Long time wilderness campers, Carol Loch, Mary Bart, and Barb
Hultman sent this picture of themselves in front of the Sawbill
store. This year, hampered by various injuries, they limited their
stay to the Sawbill campground. Next year they vow to return to
the wilderness. 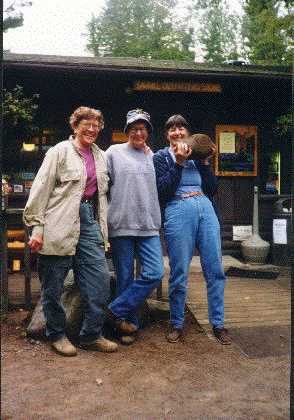 Ted Heinonen, artist, musician, and all around good guy, sent
this still commemorating the ’99 Fish ‘n’ Pick gathering in the
Sawbill campground. 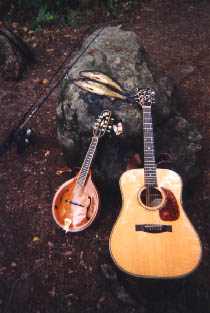 9/14/99 – We are growing gills in anticipation of a permanent
underwater life here at Sawbill. It has rained 12 out of the last
14 days. In spite of the unrelenting gray weather, most returning
canoeists are still professing to having a good time. They are
saying things like, "We had a wonderful time – it could have
rained a little less, but…" Fishing has been generally
quite good and the forecast is positive for tomorrow. The Fall
colors have just begun to show themselves in the last day or two.
We are still a week or better away from the peak. – Bill

9/8/99 – Last month we had a report from Phil Coates about
a renegade squirrel in the Sawbill campground that stole the peanut
butter knife from Phil’s table. Another member of the group, Joe
Johnston, got this picture of the pirate in the act. 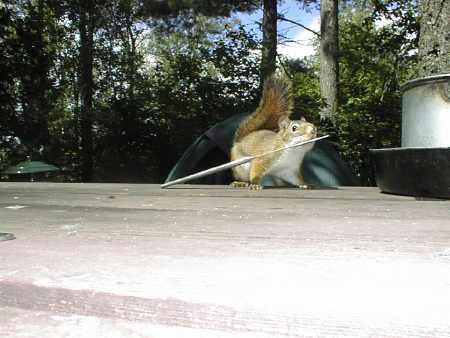 9/7/99 – Another Labor Day weekend has come and gone with no
shortage of activity and excitement here at Sawbill.

Carleton College in Northfield, Minnesota sent us a fair chunk
of their freshman class for a four day canoe trip. This is a tradition
with Carleton and Sawbill going back some fifteen years. As always,
they are well organized, have high wilderness ethics and are generally
pleasant to deal with.

Another Sawbill Labor Day tradition is a group of fine Minnesota
musicians who camp together in the the Sawbill Campground. They
call it the "Fish’n’Pick" and that is just what they
do. Fishing occupies their days and jamming ’til the wee hours
consumes their nights. Over the years we have made a campfire
available in our canoe yard so they can play and sing without
disturbing the campground. The music has evolved over the years
from straight ahead Bluegrass to acoustic original music. Some
of the state’s most talented instrumentalists and song writers
participate. Great fun for us.

Lloyd Gilbertson, dog musher and former neighbor, sent an email
today wondering if any Sawbill newsletter readers would be interested
in hiring on with him for the winter as a dog handler. If you
like dogs, like to work hard, and have the freedom, it would be
an intriguing adventure. I can attest to Lloyd’s fairness and
good nature. He now lives in Michigan’s Upper Peninsula. His email
address is: rambler@tds.net

As an aside, Lloyd invited me to go on his Y2K9 New Year’s
Eve sled dog trip 🙂 I will definitely do so if possible.

On the down side of the weekend, a few cars were broken into
on the Sawbill parking lot. This has not happened for many years.
Sawbill always seems like a magic place where crime doesn’t happen,
but I guess it really can happen anywhere. The Cook County Sheriff
responded quickly and arrested a young man who was staying on
the campground and driving a stolen car. They found the valuables
that were missing from the cars and will quickly get them reunited
with their owners. We are blessed with excellent and professional
law enforcement here in Cook County.

9/3/99 – We received the following email from Jim Mason of
Mason City, Iowa:

ended at the Sawbill Outfitters. I just wanted to drop you a line
of thanks


I’ve always enjoyed interacting with birds. On our first day
in, I decided

to go for a swim across Alton. When I got to the other shore,
I noticed

three loons had taken a keen interest in me. Apparently they had
not seen

anyone swimming in their water before and were investigating.
They made

their noisy inquiries and I did my best to return them in their
language.

Somehow, the cold water made it easier for me to duplicate their
calls. They

kept getting closer and closer trying to figure out what I was.
All they

could see was my head, which is about the same size as they are.
Then, a

bald eagle joined into the chorus. The eagle was perched on top
of a large

us. The eagle, the loons and a loony human were carrying on a
conversation.

It was a remarkable experience, one I’ll take with me to my grave.
This went

on for what seemed like quite a while. The loons got within about
10-15

yards of me. I could see their eyes and one seemed to have a reddish
glow

about his head. I started to get a little nervous about the eagle.
Did he

think I might be food? I realized that if he decided to try to
come down and

grab me, I may have already received my advance notice. So, I
hauled myself

out on the rocks so they could all see I was just a human. That
ended the


My partners dubbed the place where this all happened, the protruding

in commemoration of the event.


My thanks to Anna and John for getting us off to a good start.