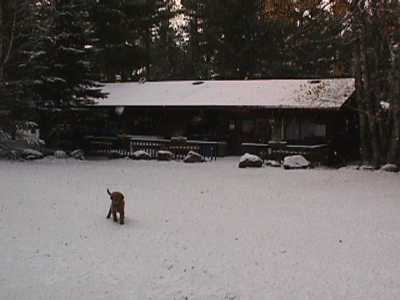 Sawbill Outfitters Store, 8:30 a. m., Saturday, October
7th.
10/31/00 – As of midnight last night, the summer-long fire
restrictions in the BWCA Wilderness have been lifted. Of course,
there is literally nobody in the wilderness right now, so it
really doesn’t matter. Our last canoeists came in yesterday.
We’ve had a few calls about early November, but I suppose it
depends on the weather. The snow buntings have arrived from the
arctic in the last few days and the snow is never far behind
them. – Bill

We received this message from Ed Dallas, the Poet Laureate of
Sawbill:

Tell Carl that I know how he feels with the owl flying over
him. Some years ago I was running the dogs over in the Aitkin bog
country and it was just after sun down when it is just about
ready to go dark when the dogs all look back at me and many of
them bent down as they ran, I, quickly, turned around to see this
huge Great Grey talons out flying for my head!! (I’m sure he/she
was after my beaver hat). It does make the heart pound faster!!
Have a good one.

10/25/00 – Carl Hansen, age 10, had a couple of notable
experiences last night. After school, he was doing something
outside, between the store and the Sawbill Trail. A pickup truck
pulled to a stop on the Sawbill Trail, less than 100 feet away.
The driver, who was screened by trees and brush, jumped out and
fired a shotgun blast at a grouse directly in Carl’s direction.
Cindy, Carl’s mom, heard the shot and ran out to confront the
reckless hunter. It is illegal in Minnesota to fire a gun that
close to a house, campsite or road. Cindy not only chewed out the
thoughtless hunter, but turned in his license plate number to the
game warden. An hour later, Carl was walking alone to dinner when
he heard a faint whooshing sound over his head. He looked up in
time to see a great grey owl gliding just a few feet above his
head. With a five foot wing span, the great grey is an impressive
sight at close range. Two hours later, Carl reported that his
"knees have just now stopped feeling like rubber."

10/23/00 – Another string of gorgeous weather favored the
small crowd of canoeists that visited over the long weekend. The
third weekend in October is when the teacher’s union holds its
conference in Minnesota, giving school children Thursday and
Friday off. We had a nice visit from former crew members Mick
Mickelson and Carol Winter. They had never met each other, even
though they both worked here during the 70’s.

10/5/00 – Snow! Yes that’s right campers, it’s snowing in the
northland. The temperature today barely made it over 40 degrees
and unfortunately with the snow came dreary skies. Of course it’s
not quite cold enough for any accumulation on the ground, but
that might not be too far off. The current forecast is calling
for temperatures in the 20’s over the next few nights and snow
is predicted to continue for the next few days as well. We’ve
been blessed for quite a number of days with clear blue skies
which the crew has had the opportunity to take advantage of. Several
of us have been ru
nning down the quiet Sawbill trail lately enjoying
the wonderful fall colors and smells. Yesterday I had the opportunity
to take a bike down the Pancore Lake road (about 10 miles or so
from us down the Sawbill Trail) to none other than Pancore Lake.
The largely unused designated trout lake is quite a sight this
time of year. Another road on my journey took me to a spot where
I stopped to watch a local resident work on his beautiful new
home. To end the day perfectly I hiked to Britton Peak, just a
few miles up the Sawbill Trail from Tofte. The vista from Britton
is not to be missed , if you’ve not seen it before stop and take
the 1/3 mile hike the next time you’re in the area. The 180 degree
view of Lake Superior along with the wonderful sight of the changing
foliage was absolutely breathtaking. Well, time to go check on
Bill’s progress draining the water from the shower house……..Wait
a minute, I just looked out the window, the snow is sticking and
piling up quickly! More snow tales to come. -Hoeky 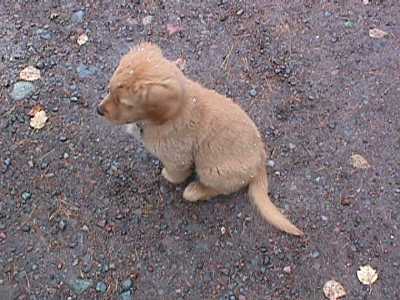