7/15/10 – Crew members Jessica, Kaj, and myself were recently venturing around Alton Lake when we stumbled upon a sight none of us had ever witnessed before. Five loons were convened in front of our canoe, seemingly fishing as a group. The three of us had previously seen at most two or three loons fishing in such close proximity to one another. Amazed (and a bit confused) we paddled stealthily towards the fishing party until we were within twenty feet of the birds.
Soon, a few of the loons began issuing short and high pitched calls to their fellow creatures scattered all over the lake. We watched five loons turn into seven and then seven turn into eight as three more loons flew to the very same spot to join in on the festivities. The loons circled up and seemed to be corralling the fish, although their true purpose remains unknown to us. 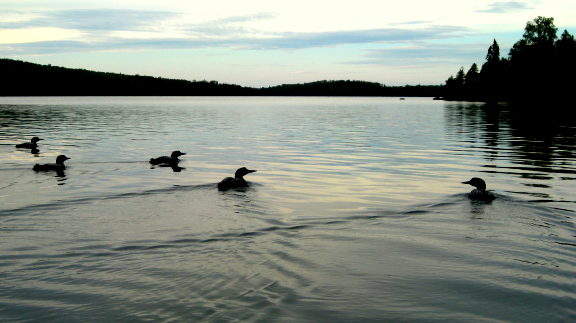 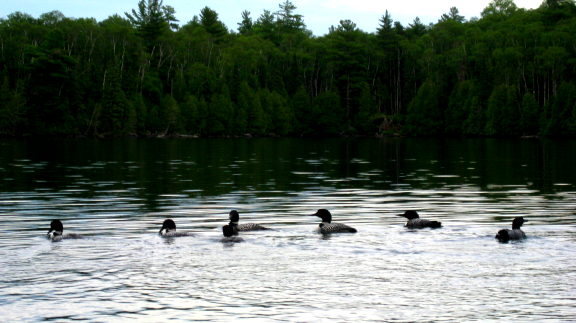 The complete hunting party.
And now some zany loon facts. Of all birds, loons have the lowest wingspan to body-weight ratio. When you see them take off, you can tell- they take as much as a quarter mile of lake water to get in the air. In fact, it’s almost impossible for loons to take off from land, or to even walk properly (they have to furrow with their chest, doing a great wheelbarrow impression). The compensation for a lousy flying ability is that they are some of the best swimmers. Loons are also some of the deepest diving birds. Lake Superior fishermen have reported catching loons in nets up to an unbelievable 240 feet under the surface. They even fight under the water, propelling their sharp beaks into other loons that have dared tread upon their territory. Loons are some of the most solitary birds- they aggressively defend their territory against other loons, and often only choose one mate over the course of their entire life. However, according to author Bill Bryson, every fall loons of neighboring lakes have an “open house.” In groups of up to 20, each loon will lead the others to its nest. After a minute of observation, the other loons will erupt into a mass-chortle. Finally, loons have very few natural predators, but the two know adult loon predators are the bald eagle and the sea otter.
-Meg (zany facts courtesy of Kaj)