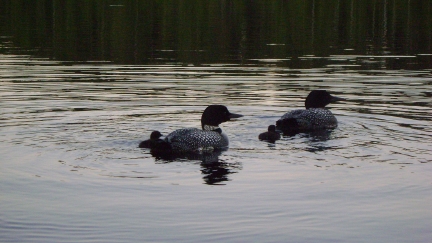 Thank you to crew member Phil who snapped a picture of this loon family as they approached him on an evening paddle.
7/2/16 -This past week some of my family camped in the Sawbill campground and we enjoyed a beautiful day of paddling to Smoke Lake. While we were paddling my niece asked my, “How did all the Boundary Waters start?” At the time I did not have an answer for her so I decided to do some research. To my niece and anyone else who is wondering how the BWCA began, here is what I found.
Thousands of years ago glaciers carved out the physical features you will see in the Boundary Waters today. The glaciers left a trail of lakes and streams surrounded by rocky shores, small hills and rugged cliffs. About 1175 lakes and several hundred miles of streams can be found within the 1,090,000 acres of Boundary Waters wilderness.
The BWCA is also part of the historic homeland of the Ojibwe people and was sparsely populated by the Sioux. Throughout the Boundary Waters you can find the native’s prehistoric pictographs on rock ledges or cliffs, the most notable on Kawishiwi River and Hegman Lake. Grand portage Indian reservation, just east of BWCA is home to a number of Ojibwe to this day.
In 1688, french explorer Jacques de Noyon became first European known to have traveled through the BWCAW area. Many years later the region was opened to fur trade and the logging industry. The BWCA has gradually developed through a series of acts in the past hundred years and by the 1920’s roads had been built through the Superior National Forest to promote recreational use of the area. In 1938 the area was established as the Superior Roadless Primitive Area and then renamed in 1958 as the Boundary Waters Canoe Area.
The most influential action was the BWCA Wilderness Act of 1978 which established the Boundary Waters regulations much as they exist today with limitations on motorboats, mining and logging. There are many continuing efforts and organizations that make it their goal to preserve, protect and enhance the lakes and forested areas so that the public may enjoy the unique landscape. Approximately 250,000 visitors come to visit the Boundary waters each year making it one of the most visited wilderness areas in the country. -Alissa