12/30/97 – The Hansen family has been on the road, visiting the big town of Minneapolis for a shot of culture. Bill, Cindy, Clare, Carl, Ruthie and Adam stayed at the Hyatt Hotel on the Nicolet Mall downtown. Both the desk clerk and the bell hop are frequent visitors to Tofte. We joked that we were coming to pester them at work for a change. We went to a Timberwolves game, the Children’s Theater’s “Peter Pan”, the Dayton’s animated Christmas display (the Nutcracker, designed by Maurice Sendak), ate a gourmet meal, shopped, danced until 2 A. m. (Bill and Cindy only), and saw the broadway show “Bring In Da’ Funk – Bring In Da’ Noise.” Whew!

We returned home to catch up on chores and squeeze in a little ice fishing with the Jensen brothers Hawk (Tom), Friend (Paul), Grub (Bill), and Hawk’s son Noah. The Jensens have been camping at Sawbill since the 50’s and Hawk worked at Sawbill for several years in the 70’s. 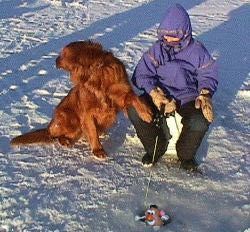 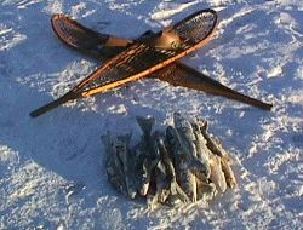 Good fishing on a lake near Sawbill.
12/25/97 – A very happy holiday was had by all here at Sawbill. Carl Hansen, at age 8, is the perfect age for Christmas fun. Santa brought exactly what Carl asked for – a rubber chicken! (Not pictured.) 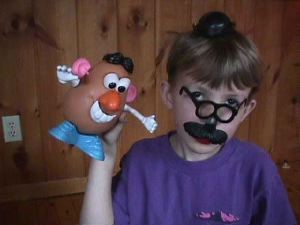 Here’s what happens to a kid who grows up in the woods 🙂
Adam and Bill Hansen continued to take advantage of the fantastic lake travel conditions. Today they skied from Sawbill, through Alton and Beth, to Ella Lake. There are a few small pockets of slush, but not enough to be discouraging. Frosted trees, wolf and moose tracks, and perfect silence were their reward at the end of a vigorous ski. 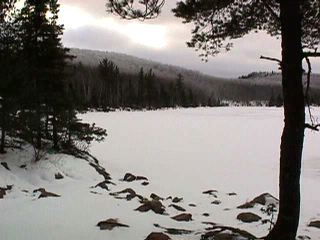 Beth Lake – Christmas Day 1997
12/23/97 – John (OB) Oberholtzer, Adam Hansen, and Bill Hansen had a wonderful wilderness ski expedition yesterday. They skied up the Brule Lake road to Homer Lake and then completed the loop from Homer, through Vern, Juno and Brule lakes, about 30 kilometers in all. Vern Lake was the epicenter of the 1996, 5,000 acre South Temperance fire. It was a beautiful but stark scene on a gray December day. There are small signs of life peeking out here and there, but mostly it is ghostly quiet: no squirrels, birds, or green pine needles. They found a moose skeleton on Juno Lake, an obvious feast for wolves, ravens, gray jays, and other scavengers a couple of weeks ago. Only the skull, spine and half the ribs remained. A snowmobile track on the Brule Lake road sped up the return to the truck, but unfortunately, the snowmobile tracks continued out onto Brule Lake, a violation of the wilderness concept (not to mention federal law).

12/20/97 – The lake is finally free of slush. The slush eventually got so bad that it seeped through to the surface and then froze. The dusting of snow we have had, combined with some blowing snow have left the surface of the lake perfect for ski travel. Several members of the St Louis Park High School cross country ski team are training on Sawbill Lake this weekend. Although today was the second shortest of the year, it was a calm, sunny, blue day with just enough new snow to make everything sparkle.

12/18/97 – We have been enjoying close encounters with a pair of pine martens that have survived the best efforts of local trappers. Monday night, a trip to the bird feeder with some leftover pasta was greeted with a series of clucks, hisses and ominous growls from a nearby tree. A flashlight revealed an very agitated marten (pine martens are basically cat-faced, 10 lb weasels). He or she continued to fuss at us for about fifteen minutes before working up the courage to descend and beat a retreat. Later that night there was a lot of commotion around the suet feeder and the morning light revealed deep scratches and claw marks in the flashing that, in theory, protects the feeder from squirrels. Amazingly, the suet feeder and the suet were still intact. Yesterday, two martens were busy chasing each other around the place all evening. We are guessing their rivalry was the cause of all the growling the other night. Nothing against the trappers, but it seems like the entertainment value of live martens vastly exceeds their value as a fashion statement for a person with too much money.

Unbelievably, we had rain overnight. It wasn’t much, but it has made the old snow even crunchier and the paths more treacherous. The lake ice on Sawbill is 6″ thick with about 6″ of slush on top of that in most places. The old slush is frozen, but plenty of new slush has formed to keep travel fairly miserable. No sign of really cold temps or significant snow in the forecast.

12/15/97 – We are scheduled for record high temperatures today. It is already in the mid 30’s at 7 AM. We are still skiing on the unplowed campground roads, but the tracks won’t be able to stand much melting.

12/12/97 – It is a sunny blue day! The grey streak is broken. The wind carrying the high pressure has the pines swaying and is making an expansive sound as it blows out of the Boundary Waters. Our resident pine marten has been absent lately, a sometimes unfortunate side effect of the trapping season. Yesterday, however, Frank saw a pine marten dodging into the log pile trailed by two eager golden retrievers. Despite their diligent patrol, the marten seems to be doing fine, as I saw its fresh tracks today headed to our dumpster. Evidence of a midnight snack on our smoked fish remains, perhaps?

The birds and squirrels continue to feed at an alarming rate at our feeders! The feeders need constant attention, a fact that Cindy is delighted to bring to our attention, as that is typically her chore. Gulls by the hundreds have been gracefully and slowly circling above the Grand Marais harbor and over the hill. An old timer says this means snow. So far, not much snow. Apparently, El Nino has the gulls confused as well.

12/10/97 – Another grey, warm day. I hate to admit it, but one day has been much like the other lately. We seem to be caught in November, unable to progress fully into winter. The air just doesn’t have a sting to it yet. It is very peaceful here. We haven’t even seen a car driving in since the weekend. The North Shore, normally a very busy tourist destination, is dead quiet. The locals all take the opportunity for extra visiting and play activities before the busy Christmas vacation season descends.

12/9/97 – Cindy is doing very well. She is back to nearly full speed, only requiring occasional help with her socks and door knobs. Thanks to everyone who sent their sympathies.

We were able to set a track on the portion of our ski trail that runs on the unplowed campground roads. While skiable, it is just barely snow covered, and will not last unless we get some more snow. The lake continues to be plagued by slush on top of the ice. Cold weather will eventually take care of that.

12/5/97 – Medical update: Cindy had casts put on today. Dr. Jenny Delfs confirmed that both arms are broken, although the right one is only about half broken. Therefore, Cindy qualified for a short cast on her right arm and a full length cast on the left. This has increased her self reliance by leaps and bounds. She is in excellent spirits and plans to attend dance class on Monday, although probably will abstain from pirouettes until she is healed.

The ice depth, as measured by The Iceman – Obie, is 6″ with 3″ of slush on top. We are receiving snow at the rate of a couple of inches per day, but it is still insufficient for ski trail grooming.

12/3/97 – Cindy Hansen, co-owner of Sawbill Outfitters, broke both of her arms last night. She was taking her weekly modern dance class and on her third double-pirouette, her ankle tipped over and she fell backward onto her wrists. Fortunately, there are three nurses in the class, so she got excellent first aid. She will be in double casts for four to six weeks. The entire dance class accompanied her to the E. R., which made for a rowdy time at the hospital.

12/2/97 – The Sawtooth Mountain Clinic provides the only primary health care here in Cook County. If you should be injured or become ill while on your canoe trip, the good doctors at the Sawtooth Mountain Clinic would be your source of quality medical care. Cook County is unique because it has a very small permanent population and a high number of visitors. For almost 20 years, the clinic has received a grant from the U. S. Department of Health and Human Services. The grant makes it possible to provide primary medical care in the this remote location, as well as subsidizing care for low income families.

Now the grant, known as a Section 330 (Community Health Care Program), is in danger of being cut. Please take a moment to email your Congressperson from the U. S. House of
Representatives Home Page and ask them to write to Richard Bohrer, Director, Division C/MHC, 4350 East-West Highway – 7th Floor, Bethesda, MD 20814. Have them ask Mr Bohrer to continue Section 330 funding for the Sawtooth Mountain Clinic in Grand Marais, Minnesota.