1/29/98 – All quiet at Sawbill today. Monday and Tuesday we had a visit from Jim Newman, a reporter of WDSE – PBS, the public TV station in Duluth. He and photographer Steve Asche joined Mark Hansen and Mark Spinler from North House folk school for some camping and skijoring (skiing behind a small dog team) on Sawbill Lake. They had lovely weather – warm with light snow. Folks within the WDSE viewing area should keep an eye out for the story on the "Venture North" program in the near future.


Our own Clare Hansen will be performing with the Duluth-Superior Symphony Orchestra on Feb. 15th. This is Clare’s second chance to play her accordion with the orchestra this year. This time, she will be in a group of five young accordionists, playing two songs for a children’s "Lollipops" concert.


1/25/98 – We enjoyed a half hour of pine marten antics around noon today. We noticed a marten running around in the tree just outside the house. As we watched incredulously he/she ran to the top of a 60′ aspen, scampered out on a flimsy, dead branch and promptly fell thirty some feet into another tree. Unfazed, it returned to another tall tree and attempted an impossible leap, resulting in another painful looking fall. It was clearly eyeing a piece of leftover chicken we had placed on the bird feeder. It finally seemed to get tired of falling and came to rest on a small red pine branch about 40′ up.

After we stopped watching, the marten nabbed the chicken and worked over a glob of frozen refried beans.


1/22/98 – Minnesota State Senator Steve Morse (DFL-Dakota) has announced that he
will actively pursue passage of legislation that will continue
restrictions on motorized use within the BWCA Wilderness. Senate file 2002 will continue the phase out of motors on Seagull Lake
currently planned for January 1, 1999. By exercising the State’s
right to supercede federal jurisdiction on waters in Minnesota, Sen.
Morse’s bill would block a move in the U. S. Congress, sponsored by Rep.
James Oberstar (D-MN) and Senator Rod Grams (R-MN), that would eliminate
the Seagull Lake outboard motor phase out.


The bill does not address the issue of truck portages within the
wilderness, or change any other motorized use currently allowed within
the BWCA Wilderness.


Morse’s bill is being co-authored by Sens. Jim Vickerman (DFL-Tracy), Len
Price (DFL-Woodbury), Dennis Frederickson (R-New Ulm), and Gary Laidig
(R-Stillwater). In the house, a companion bill is being sponsored by
Rep. John Tuma (R-Northfield). “It is important to note that there is strong bipartisan support for this bill.” Sen. Morse said.


1/20/98 – The Boundary Waters Permit Reservation Center finally has a website. Point your browser to http://www.bwrc.com. They have general info on reserving wilderness travel permits, permit availability by entry point and date, and both an email and downloadable reservation form.

Chris Weggemann, from Eagan, is out on a solo camping trip to Cherokee Lake for the weekend. He is no doubt enjoying the warm temps, soft snow and bright moon. He will stop in on Sunday or Monday with a conditions report.


1/15/98 – Six inches of fluffy, soft snow fell yesterday and overnight. Every twig and branch has at least an inch of delicate fluff perched on it this morning. The most notable feature is the effect on sound. A giant muffler has been dropped on the landscape and a perfect silence stretches across the wilderness. Even a shout has a quiet, muffled tone to it. 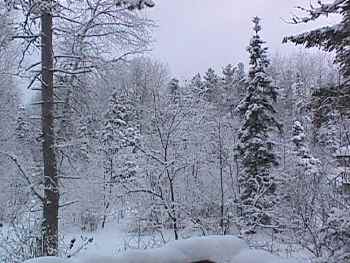 Lloyd and Mary Gilbertson, who had a serious medical emergency while camping on Alton Lake recently (see entry from 1/6/98), have had more bad news. While Mary was on her way to finishing in fifth place in the John Beargrease Sled Dog Marathon this week, she and Lloyd’s house burned to the ground. This is a crushing blow for anyone and certainly comes at a bad time for Lloyd who is still recovering from a collapsed lung. Even Lloyd’s great good natured spirit must be somewhat dampened by this string of disasters.

On a more cheerful note, we received an email from Dave Hart announcing the launch of his website for the "Bloody Knees Canoe Club." Dave and his cheerful group are long time Sawbill customers and have a good set of images and route descriptions of their many trips.


1/12/98 – A quiet week here at Lake Sawbill. After all the excitement of last week, a little boredom is welcome. The big news is the much belated arrival of full fledged winter. 8" of snow fell on Friday and we are finally able to groom our entire ski trail, including the new kilometer of hills. The local ski trails are all in excellent shape now. This is surely the latest beginning of the ski season in recent memory.


1/6/98 – Many dramatic things have happened in the last few days, not the least of which the failure of both of our radio telephones simultaneously. The irony is that we will soon be abandoning our aged radio phones in favor of a microwave system. It is a shame to put expensive repairs into something we will soon be abandoning, but we are dependant on telephone service, especially for our internet connection. Anyway, if you have been trying to reach us by phone, we are now back in full operation.


Sunday night we had two timber wolves come quite literally to our door. About 8 PM a visitor, Ann Strittmatter (former Sawbill crew member), was starting out to walk between our houses when she came face to face with a full grown timber wolf in the driveway. It saw her, but did not seem alarmed. Neither did it seem aggressive. Soon it walked slowly off into the woods. A moment later another wolf appeared from behind the wood pile, walked into the spotlight shining on the driveway and sat down. By this time we were watching from the house with fascination. The wolf stood up and walked down the path toward the house. We rushed rather noisily to the windows on that side of the house and were rewarded with an eyeful of wolf sauntering by about ten feet away. I am kicking myself for not grabbing the camera which was sitting about five feet away.


The same night, musher Lloyd Gilbertson was camped on Alton Lake with 8 people and 25 sled dogs. He had three wolves walk boldly into his camp and eat the dog food. Lloyd said they were less than 10 feet from his tent and equal distance from 25 barking Alaskan Huskies. After eating the dog food, the wolves walked off, still apparently unconcerned by their proximity to humans. We are wondering if they might not be domesticated wolves that someone has released. They did not appear to be starving, ill, or in any kind of distress. In any case, all of us were thrilled with the close encounter.


Lloyd’s adventure continued the next day when he fell, broke some ribs, and punctured his lung. He immediately began to swell up and have trouble breathing. His wife Mary and son Ole rushed him back to Sawbill on a three dog sled, only to be greeted with the news that the telephones were dead. We quickly loaded Lloyd into the truck and headed for Grand Marais at high rate of speed. He was barely able to breath, couldn’t see and couldn’t talk. Obie went ahead in his small car and stopped at the North Shore Market in Tofte to alert the hospital. They sent the ambulance and Lloyd transferred to it about ten miles outside Grand Marais. The paramedics were impressed with the severity of his condition. He was quickly stabilized by the expert medical staff at the North Shore Hospital and will be able to go home after a three or four day stay.

Other than that, it has been pretty peaceful around here ;-)


1/2/98 – Sawbill is awash in people (at least for this time of year). Visitors from, England, Minneapolis, Kansas, and Chicago are enjoying some of the only significant snow in the state. There are three trucks on the parking lot, one of which carried a dog team. The weather is balmy for camping, although the forecast calls for radically colder temperatures by tonight. -15 degrees is predicted, which usually means at least -20 here.