11/27/98 – Our traditional Thanksgiving weekend is progressing nicely here at Sawbill. As in many years past, Tim Velner and Gus Gustason, from Duluth, are camping in the campground with friends. Today we will all play in the annual "Sawbill Bowl" touch football game on the snow covered lake.

We will be inspired by our own Cook County High School Vikings, winners of the Minnesota state high school championship in an exciting game at the Metrodome in Minneapolis yesterday. Cindy, Carl and Clare Hansen left Sawbill at 5:30 A. M. to attend the game and were treated to one of the most exciting games in Prep Bowl history. The game was decided in two overtimes with the Vikings triumphant 38 – 32 over a plucky team from Adrian, Minnesota. Over 1,000 Cook County fans made the long trip down to the Dome. Not bad for a county with a total population of 3,200.


11/24/98 – The sun rose beautifully over Lake Superior this morning. Intense pinks, dark purple backlit clouds, and powder blue skies. A slight swell gently rolled in from the Southeast. Each morning, I prop my groggy self up to look at the lake. I watch as long as I can hold myself in that fuzzy state, warm blankets calling me back. Later, I breakfast with all that sky and lake. Finally, out the door, I hear the roll of waves and crisp sounds of rock washing back and forth. Ravens and seagulls soar in the distance. In my car, the lake is at my side, and, in my head, a gestalt of light, moving water and flying black and white dots, accompanies me over the hill and into the woods for another day of repairing canoes.

I saw the photo of Harvey Diehl using the “Plankmaster 2000” paddle on the
news page. Many novice canoeists use this particular model around here before
they can afford to use a real paddle like a Martin D-28. My personal favorite
is a ’58 Les Paul, but the problem with them is that they don’t float and they
are useless unless you can find an electrical outlet. I’m not sure an
electrically powered paddle would be acceptable for use in the BWCA anyway.


And does the paddle stop working if you drop your pick? Will the number of
strokes per minute increase if you use a capo? Then there are alternative
tunings. Which one do you use for the “J” stroke?

11/20/98 – We have received some snow in each of the last 13 days, including 11" on Wednesday night. There is a total of about 18" on the ground right now. Yesterday, we groomed our cross country ski trail for the first time. Skiing is excellent, but the forecast is calling for unseasonably warm weather next week.

On Wednesday morning Bill, Carl, Clare saw five moose in a group about three miles south of Sawbill. Heavy snowfall covered the three small bulls and two cows with white blankets. After a moment of mutual observation, they trotted off together into the woods.

Longtime customer Harvey Diehl of Iowa City sent this picture of himself using an unusual paddle in the BWCA Wilderness. After the trip, Harv leaned the "paddle" against the dumpster in the parking lot. Somehow, it ended up hanging in the Sawbill Crew bunkhouse, where it remains to this day. 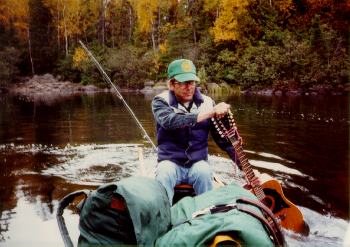 11/17/98 – The weather forecast is calling for a foot or more of snow in the next 24 hours. Many people wonder what we do with all the canoes. The aluminum and Royalex canoes snuggle under a thick snow blanket. The Kevlar canoes get stored in the dome, standing on end. We have also received our first shipment of new canoes for next year. We put those in the dome too, making a total of more than sixty canoes standing around looking foolish. 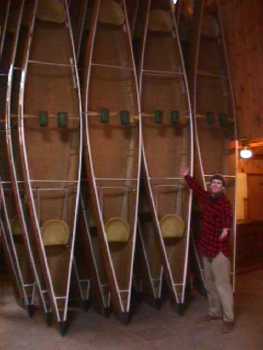 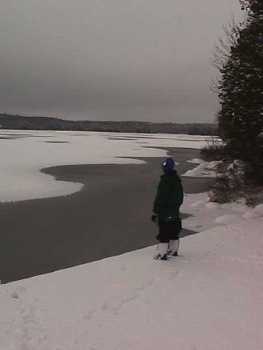 A skim of snow is on the ice, which is pretty, but not so good for our ice skating hopes. Ski skating would be perfect with that dusting of snow bonded to the lake, but any ventures to the lake will have to await a few more inches of ice. Ice skating is such fun up here. It is wonderful to explore without the confines of a rink. Last week, I skated a few days on a small pond down the road. For two days a perfect dark glass surface provided conditions for flying in the November sky. The pond bottom, stumps, weeds, scaly lily pad roots, were crystal clear below my feet. The ice has such a great feel and resonance, like some space age industrial plastic. On one end of the pond, the remnants of the forest that was flooded, stand like gates in a slalom course. Each tells a story of weather and decay. Such incredible details, etched from wind, boring insects, and wood peckers. The birches are slightly smooshy under their weatherproof bark, flexing at the slightest touch. It’s a sculpture garden on that end of the pond. We tried to leave no trace, but one of our beginning skaters in desperation tried to use an old spruce to help him brake. They broke, each to the ice! It was wonderful to jet around, spinning forward then backward, coasting and listening to our blades. Along the shore, we traveled slowly examining Fall’s dried arrangement, which we knew would soon be covered. Skating provides such a magical feeling. The time for it is brief, before the snow comes, and the feeling is so unlike other modes of movement. A treat of our winter lives here. 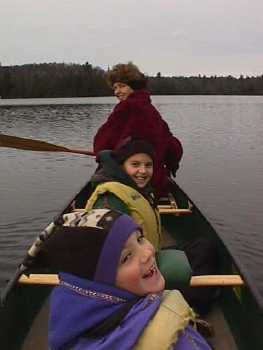 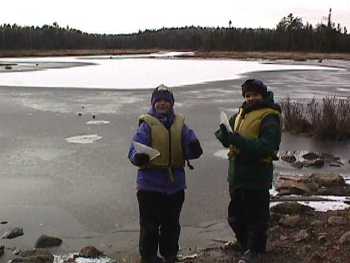 Imagine their surprise when they portage into Kelso Lake 🙂

11/3/98 – Cindy and Bill Hansen, John Oberholtzer, and Jason Morse attended the memorial service for former Sawbill crew member Hans Hicks in Duluth on Monday. Over 200 people, mostly from the Duluth rock climbing community and the UMD Outdoor Program, attended the gathering in Leif Erickson Park on the shore of Lake Superior. Jason, John and Bill all spoke of their memories of Hans, along with about ten other people. Hans was a shy and quiet man, but had many friends and admirers. He was a trained biologist and geologist, an expert rock climber and kayaker, and a great lover of wilderness. Jason recalled Hans’ powers of observation and toughness that he observed on their many canoe trips. Bill talked about his sensitivity toward and deep knowledge of wildlife. OB reminded us of the reality of clinical depression and entreated the gathering to remember that friends and family are a support network in times of despair.


Friends were asked to bring an environmentally friendly object to place in Lake Superior in Hans’ memory. A flask of Sawbill Lake water was poured on behalf of the entire Sawbill crew, past and present.


11/1/98 – David and Kathryn Olson, from New Jersey, were nice enough to point us to this picture they took with a video camera during their canoe trip this year. They are not naming the lake where they spotted it, to protect it from hunters. 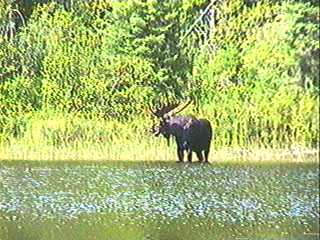 You can see more pictures from their trip here.