2/28/99 – Former crew members Cathy Iverson and Dan Seemon are visiting for the week. Their arrival was heralded by intense moans and gyrations by the dogs. Dan and Cathy are a doggie nirvana of snacks, walks, and sweet talk. A very gray today, which began in a thick fog. Yesterday, thunderstorms were reported along the shore! Quite odd for this time of year.


A moose is frequenting the "roller coaster" section of the Sawbill Trail. He has been lying in the road licking salty ice chunks from the cars. Standing up is a stiff laborious affair for a moose, and I sort of feel bad interrupting the licking. However, I wonder how healthy those big salty blocks of road grime are? Fortunately, this year the snow banks remain within the moose comfort zone for hurdling. Most of the moose I have seen, eagerly duck into the woods. A few winters ago, the snow banks were very high, and the prospect of bogging in them, kept the moose zig-zagging down the road. There were some long drives to town that year, and stressful days for confused moose. I am glad when the moose quickly dash to safety, though my observation is limited. It is great drama to see such a huge animal melt back into the woods, as quickly as it appeared. Sometimes, I focus too much on the radio, road and work day. The brief appearance of a moose resets my mind, reminds me of the aberrant nature of the road clearing in a thick forest full of creatures. I stop the car and try to catch one more glimpse. The daily reports of environmental degradation make these encounters more precious. It is such a treat to understand we are still sharing the world, part of a community. OB


2/26/99 – When I walk out under our tall pines, listening to the wind in their tops and seeing the happy blue above, I am glad. The dogs stretch, moan, roll in the snow, and nip affectionately at my gloves. We have all been holed up in front of the computer for too long. There is plenty to do this week, as Cindy, Bill, Carl and Clare are exploring Arizona. There is still work to do today, but it will have to wait. Gust, the older of our retrievers, is starting to move a little more slowly. I tried to encourage him to go out and run, but he lay still, pretending confusion. I finally got him out the door, where he immediately curled up. I asked if he would prefer my company – immediate comprehending wag of tail, Sunnie, our younger retriever, crooned and shook her fanny. Out we went, walking far below the old growth white and red pines blowing a big sunny sound, invigorating our spirits. Soon both dogs were running, leaping, pulling each other down. In the warm sun, on spongy snow, I joined the game – fake charges, leaps, and rolls.


I think of our pines from above, how they rise out of the canopy, a small red and white pine hill in the forest, a pine bloom. We walk about, the dogs and I, they, diligently nose to the ground, me, straining my neck staring up at the pines. Such wise animals dogs, to explore and enjoy that which is underfoot, instead of seeking the mysteries of the tree tops. I can’t help myself though, wondering how it is up there – dancing in the wind with all those long green needles, stretching branches high. A glorious existence, to be the first to know what the wind carries, the first to see the sun, and the last to see it go. I’ve climbed up there a few times, wedged in among branches and an intoxicating scent. Swaying at the top of a big old pine, forest stretching as far as I can see, I’ve sensed an illusive spirit, another way: lonely, wild and ancient. A hint at the way in which the earth is operating here. It is an exciting sensation and a little odd. A red squirrel’s repetitive click up there seemed less like scolding and more like a maniacal laugh, entirely foreign, a siren from another pulse and pace of life. High up there, everyday, those pines sway back and forth in the air, the same air our chests rise and fall against. It has been that way for a long time, long before our way of knowing. The sensation is one of transcendence, and it feels good. Good because of the sneaking suspicion that abstract thought only penetrates so far, and because we intuit an exoticism and enlightenment, typically reserved for extraterrestrials, right in our midst. OB


2/22/99 – One of the all time great groups of Sawbill returned today from their annual winter camping trip. All are distinguished members of their respective communities, who come to the northwoods to "act like adolescents" (note the fuzziness of the portraits). 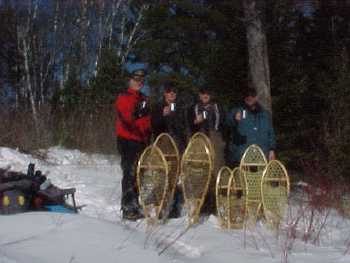 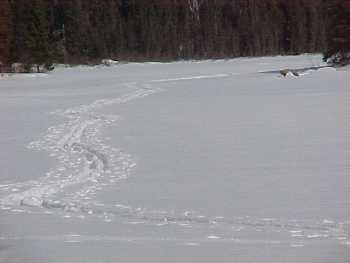 The Consortium – Winter Addition (L to R) Rich, HMFIC (His Majesty First In Command), Voyageur, Marmaduke and their ski tracks (what’s in those cups?)

I experienced a "once in a lifetime" wildlife sighting today as I was driving to town to fetch the kids from school. About seven miles north of Tofte I noticed an animal running in a snowmobile track alongside the Sawbill Trail. I assumed it was a fox, as we see them frequently in this area. As I drew abreast of it, I was startled to see that it was a bobcat. Instead of bolting into the heavy cover, like every other bobcat I’ve ever seen, it sat down. I braked to a stop and then slowly backed up until I was right next to it. It seemed unconcerned, even when I lowered the window and spoke to it gently. I was able to study every detail from a distance of about five feet. Its face was like an ordinary house cat, except nearly twice as big. Heavier, longer legs, huge feet, and a short tail distinguished it from a tabby. As I tried to sear the moment into my memory, I suddenly realized that what I had first taken for whiskers were actually a dozen porcupine quills protruding from its muzzle and nose. The poor miserable thing was probably starving, explaining its strange behavior. I briefly entertained trying to use my Leatherman to remove the quills, but thought better of it, both because the cat wouldn’t have allowed it, and my philosophy that nature should be allowed to take its course. This brought the realization that I was adding to its stress with my presence. I whispered "good luck" and rolled away. I watched in the rear view mirror as it crossed the road and padded into the woods. – Bill


2/19/99 – Every year we face the task of removing snow from the roofs here at Sawbill. Four of our buildings are not strong enough to bear the weight of more than four feet of snow. When the snow reaches a depth of three feet, we shovel it off to avoid being caught by large storm. 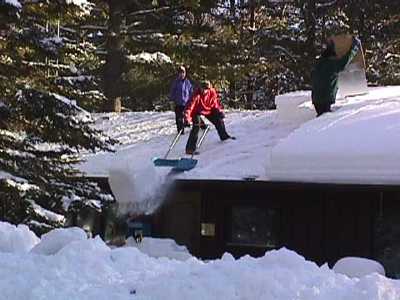 Obie, Jake and Carl on the roof of the Sawbill Store, viewed from the front.

2/17/99 – Cross country skiing at night, with a headlamp, the night before last brought on another astounding optical illusion. A fine snow was inexplicably falling under starlit skies. The snow, and perhaps a slight haze, obscured the dimmer stars, letting only the brightest shine through. The Milky Way, which is usually prominent as a gauzy band of light across the sky, could not be seen. When I stopped for a breather and tipped the headlamp back to look at the sky, its beam reflected on the tiny, falling snow crystals. Suddenly, it appeared that the Milky Way was falling to earth, each tiny star a sharp, cold ice crystal. Last night the snow had stopped and the Milky Way was back in its place. In the sub-zero cold each star shone without a twinkle, as solid as time itself in the vastness of the universe. – Bill


2/12/98 – A gorgeous storm blew across our home last night. Strong winds howled and swirled, sculpting six inches of light snow into whips and ridges. The warm weather of the previous week had left a dirty crust of snow and treacherous icy footing. Today, it is all frosted. Pure white rolls over every corner and edge. As the day progresses, the birds’ activity is recorded in the light snow at the base of our feeder. Gros beaks hop about, fluttering their wings on the snow for support. Like micro snow shoe tracks, the paths of the gross beaks slowly encircle the feeders – their little wing prints like leaves accumulating in the Fall. The grouse must be glad, as they count on fluffy snow for hiding and warmth. In the next few days, skiers and snow shoers all over the North Shore will be treated to the shock of grouse exploding from the snow in a burst of white and noise. Very intense. As the light fades, the beauty is intensifying. It is time to turn off the computer and step out the door.


2/8/99 – Former Sawbill crew members Kate Ferguson-Surbaugh, Steve Surbaugh, and Jason Morse are on a winter camping trip this week. They departed yesterday, along with current crew member John Oberholtzer and Snoose Surbaugh, the dog. They were surprised I’m sure, as we were, by an unexpected half inch of snow last night. Otherwise, the temperature is balmy and they are doubtless having a good time. Kate and Steve worked two years for Paul Schurke’s Wintergreen Lodge in Ely after they left Sawbill, leading winter camping trips.


2/5/99 – I just finished tying a canoe on a customer’s car! Don’t worry winter campers, the lakes are still solid. Mary and Jeff Krejci are enjoying a week of skiing, and decided to buy one of our Mad River Explorers. Jeff and Mary were our first customers of 1998, beginning their trip May third. Although technically our season has not begun, I think the purchase of a kevlar canoe warrants their designation as first customers of 1999. Congratulations Mary and Jeff. Since this is the first mention of this achievement, we’ll call it the "Krejci Award". Winners will receive a cup of coffee or hot chocolate, and a picture taken with Bill, Cindy or Obie. I suppose the last customer of the year deserves recognition. Come to think of it, this year that was very nearly Jeff. Hmmm… Okay, great, the Fall "Krejci"! First place will be awarded a hot beverage and a photo op with favorite outfitter. After forty-two years, finally a solution to the lack of business during the shoulder seasons.