1/31/99 – We’ve been skiing in the moonlight every night. On Friday night, Clare Hansen took along a catalog and picked out her new swimming suit by moonlight in the Sawbill parking lot. She was able to clearly see the pictures and read the text. Saturday night, Carl Hansen read a Garfield book in the same spot. As the week progresses, the moon rise will surpass our bedtime. Our nocturnal skis are truly a "once in a blue moon" experience.


1/28/99 – I snowshoed in a section of tall pines near the Perent Lake Road yesterday. The recent snow is wonderful: sugary and light. Eight inches of it sifted like sand through the rawhide webbing, step after step. Snow was drifting off the trees and wetting my face. A squirrel alerted me to his stash of white pine cones below the snow. He must have been processing the cones all during the storm. Little cone chips were mixed in with the snow about five inches down – a neat soup to run my hand through. I thought of that squirrel nibbling away, the snow piling up on his head. Nearby the stash of cones, a grove of hazel held more squirrel treats. Four and a half feet off the ground were dozens of drying mushrooms. Wedged into the forks of hazel branches earlier this summer, the mushrooms were perfectly dehydrated. I saw one, and when I tuned my eye to them, I was amazed at how many there were. I thought of my friend who dehydrates mushrooms and prizes them above all else that he dries or jars. I wondered if the mushrooms were a treat for the squirrels, as well. The mushrooms had a musky odor and were rather pretty. Brown and twisted, stems hanging down, they were like little seahorses suspended in the hazel. The old timers say the height of stored mushrooms in the woods predicts the snow depth for the winter. These mushrooms were still a couple feet above the snow. I’ll check them again in a month or so. It was a treat to look into the woods as a squirrel might.


1/27/99 – The snow is floating down and settling on every twig and branch. The snow, the grey dawn light, the clouds, and even the birds are all absorbing sound, giving the world a hushed, cottony aspect. About 4" fell overnight. 6" – 9" is expected, with more possible in the higher elevations (that’s us). 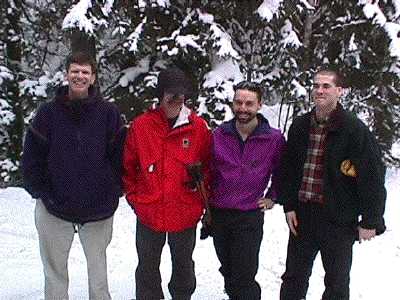 Rich and Jake Hicks stopped by before their winter camping trip yesterday. They were excited and looking forward to beautiful weather. They were heading out toward the Lady Chain and will stop in on Sunday with a report. 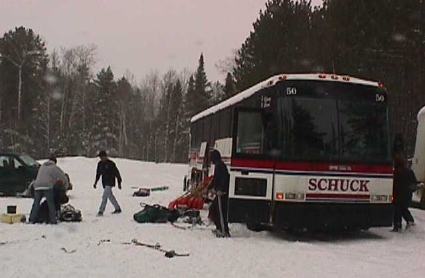 This is a sight you don’t see every day at Sawbill, especially in January. Forty seven people from the 1st Lutheran Church of Fargo spent Martin Luther King weekend camping in the wilderness. This is the second year this well organized group has done this, although with fewer people last year. They are very careful to split up into groups of nine and take completely different routes. They enjoyed the balmy temperatures and snow, but were somewhat buffeted by the 30 mph winds that blew them in on Monday.


1/16/99 – Yesterday marked the first day in 28 days that we didn’t record a below zero temperature. This morning we awoke to an incredible 29 degrees. On the way home from school, Carl and I saw four bull moose in a group. Three were adolescents, with modest antlers. The fourth was a giant, with a huge rack — but only on one side. Imagine having a forty pound, two foot long weight glued to one side of your head. On the same trip we saw one of the largest, most beautiful wolves we have ever seen.

Jake Hicks, brother of former Sawbill crew member Hans Hicks, visited on Thursday. He started out to ski to Burnt Lake, but was turned back by slush about a mile up Sawbill Lake. Two parties are out camping this weekend. Hopefully, they have found a way to avoid the slush.


1/12/99 – Bright sunny day and very crisp, -8 as a high today. A dusting of snow covered the ski trail yesterday. Usually this is good news, but this snow, having fallen during sub-zero temperatures, was very difficult to wax for. The snow holds the ski, a sensation like being in a slow dream where it is taxing to move. I found myself stopping more often due to the exertion. The woods are very quiet after a new snow. No wind or animal stirred. I stared for a long time up the length of a dead jack pine, spiky and sun bleached. In such total silence, the mind seems to expand, and it felt as if my thoughts and the thinking apparatus of my mind, were among the woods. A slight ringing deep in my ears, moved out. The jackpine silhouetted against the sky and the snowy spruce, seemed less like observed objects and more like a backdrop inside my head, by which other thoughts passed. Sort of a mental screen saver. I stood thus transfixed, until the cold crept into my feet and hands, tweaking my mind like the sensation of losing a vision of a three dimensionally drawn object. I skied, warming my feet and hands, acutely aware of the tunnel of boreal forest wrapped around me, drawing closer with the dusk. I headed home moving as if in a womb – silent, warm, nurturing, seeking a timeless dimension of pine, snow, and silence.


1/8/99 – The news is good at Sawbill for the birds. Jays, finches, nuthatches, and chickadees have spread the word, and our yard is full of flight. On cold days like these, avian logic calls for a lot of movement. Each bird flies sortie after sortie from spruce to feeder, feeder to aspen, etc. I’ve been observing a blue jay leaping among the lower dead branches of a whitepine. Each leap is a cupped depression in four inches of snow frosting. The jay lands, fluffs her feathers momentarily, and leaps again. Leap, puff, fluff, leap, puff, fluff. It looks like great fun. I try to imagine how it must feel to pop around like that. I wonder if jays look forward to soft branches and fluffy landings like we anticipate good skiing and snow shoeing. The blue jays have character. They seem less cautious than the other birds, and their blue suit does not really match, especially considered against the fashionable gross beaks. Yet, they crash the party like an eccentric relative, dining on old Kraft Mac and Cheese like it was caviar. They’re the bird for me: poorly dressed, brash, and too proud to pester campers for handouts like their drab, bulkier, grey cousins.


1/6/99 – It is bitterly cold here this morning. Only -10 at 11 AM, but a 25 mph wind is making it fairly inhospitable, especially down on the lake. The wind has carved wildly sculptured drifts on the south end of Sawbill. Slush has crept in under the snow at certain spots on the lake. It’s proof of the superior insulating qualities of snow that water can exist in liquid form during this bitter cold snap with only 8" of snow covering it. The slush makes travel on the lakes virtually impossible during weather this cold. If your ski or snowshoe breaks down into the slush and then you lift it up into the air – bang! – you have a fifty pound ice cube on your foot.


1/5/99 – John (Obie) Oberholtzer returned yesterday after a month long sabbatical to work on his writing. He is writing a series of northwoods essays that he hopes to have published. A fair amount of this newsletter is authored by Obie, so you are probably familiar with his style.

One interesting phenomenon we are observing this year is the frequent visit by flocks of Goldfinches to our bird feeders. For the past forty years we have seen Goldfinches only during migration. This year they hung around longer, which we attributed to the warm weather. Now, the weather has turned cold with a vengeance, but the Goldfinches remain daily visitors. Chickadees, on the other hand, are usually plentiful visitors here in the north. This year (and last) we have only a handful.


1/1/99 – A quiet evening of board games and charades got the Hansen family (plus Molly Richardson, Adam’s girlfriend) through the evening and into 1999. I was able to uphold my tradition of greeting the new year on the ski trail. A nearly full moon provided ample light to see the trail. It cast sharp black shadows across the path and made the fresh white snow sparkle in the clearings. In spite of a -24 F temperature, the outing was serene and comfortable. Ed Dallas, the poet laureate of Sawbill, was moved to this haiku: