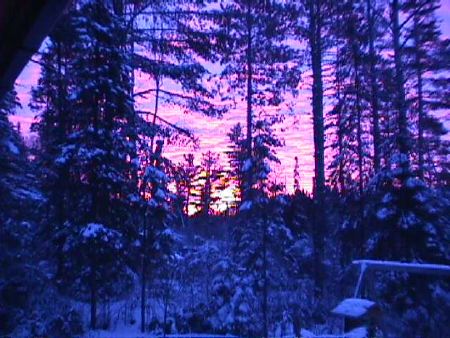 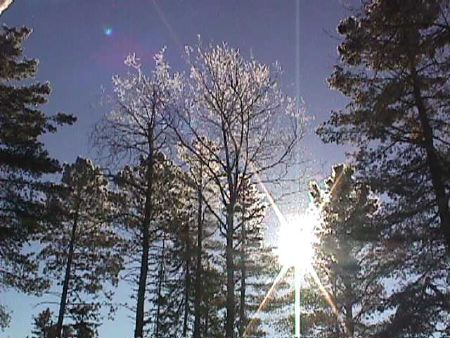 Red fire in the sky and gleaming diamonds in the tree
tops greeted the dawn in the north country.

1/25/00 – Here, in the center of the pine marten metropolis,
we are able to observe pine marten behavior in some detail. We
now have identical twin martens visiting our bird feeder. The
perfectly matched pair perch on the narrow ledge of the feeder
and munch sunflower seeds. They seem perfectly at ease with each
other, with no sign of dominance or territorial issues. I’ll try
to snap a photo during their next feeding session.

1/21/00 – I don’t know if ski trails are magnets for wildlife,
or if I just spend so much time on skis that I see my wildlife
there. Yesterday, near Tofte, I found a beautiful set of bobcat
tracks. They look just like the kitty tracks on the hood of your
car, except about four times bigger. The tracks were interrupted
by a neat pile of bobcat scat, something I haven’t seen for twenty
five years.

Paralleling the bobcat tracks, but going the other way, was
a set of huge wolf tracks. The wolf was running flat out, digging
deep holes in the hard packed snow. I once clocked a wolf at forty
five miles per hour on the Sawbill Trail. All the more remarkable
because the wolf only had one front leg. At top speed it made
an abrupt left turn off the road – on to a ski trail.

Last night I was leaving the house to meet Clare on the late
bus in Tofte. I let the happy retriever, Sunnie, in as I went
out. I walked to the pickup and opened the door to throw the mail
on the dash, when a movement caught the corner of my eye. On the
ski trail, not eight feet from where I was standing, stood a red
fox, breathing hard. It seemed completely unconcerned with my
presence, looking at me frankly and sniffing the air carefully
and methodically. What a symphony of information that sensitive
nose must experience. It stood its ground while I walked around
the truck and got in. I flipped on the headlights and it didn’t
even flinch in the glare. Every hair was vividly visible and little
puffs of steam came from its nose with each breath. When I turned
the key and the starter engaged, it turned and flicked away down
the dark ski trail. – Bill

1/17/00 – Toady is the kind of day we expect in the middle
of January. Temperatures rose steeply during the night and snow
started to fall just before dawn. It is coming down hard here
at mid-morning. The snow belt area (2 – 10 miles away from Lake
Superior) is getting the benefit of "lake effect" snow.
This will finally set up the ski trails along the North Shore
with the base they need to last the rest of the winter. – Bill

1/13/00 -Cross country skiing is dominating my life this week.
Last weekend I skied in the Grand Marais International Races.
On Saturday, I finished 6th in my age class in the 15K classical
style race. On Sunday, I finished 3rd in my age class in the 15K
free style race. Not bad for an old duffer. Karl Hansen is the
trail groomer for the 60K of trails between Tofte and Lutsen.
I have been training him in the operation of the groomer, a very
impressive machine known as a Kassbohrer Pisten Bully. We discovered
that the July 4th storm had thrown many trees across the trail
and have spent many, many hours pretending that we are loggers.
Karl turned to me yesterday and said, "I remember now why
I didn’t go into logging." We got it done though, and skiing
is quite good now.

We have several former crew members visiting. Michele Thieman,
Annie Strupek (freshly back from a year in Japan), Harriet Settle,
Dave Freeman are all here right now. Jeff thompson and Natasha
Warner are coming up on Saturday. Quite a little reunion. – Bill

1/6/00 – There’s something so attractive to dogs about humans
running. As I move between buildings in the winter, I rarely "suit-up",
preferring instead running to ward off the cold. From behind,
and I never hear her coming, our retriever bowls by my heels.
It is an exuberance of gold dog on white snow, and I smile hollering
glad tidings, no matter how close she comes to knocking me on
my keester. Dogs seem to sense in the energy of running, the robustness
of the movement, something good going on. Our two dogs rarely
move fast unless some excitement warrants it, like the time a
moose walked just about to the store, almost tripping over two
very surprised retrievers – that was a big chase! The dogs don’t
want to be left out of the action, they are eager to know all
that is happening in their domain. I wonder what the dogs are
thinking just before I come onto the scene. Probably just sort
of looking around, suspecting or hoping for something out of the
ordinary, and then they see me running, confirming their hunch,
"Aha, something is brewing over there!" I hope my disappearance
into a building is not too disappointing. Though, I suspect it
is, because they must remember and cherish as well as I, the times
we have chased bears or rascally pine martens. Yesterday, when
Sunny bolted by me, she gave me such a strong sense of place.
This is what is happening at Sawbill, right outside the door,
these two beautiful, curious dogs are roaming the snowy forest
margins, seeking the excitement that often comes sneaking out.
I knelt with Sunny, as she looked from left to right, and east
to west, and felt the lively cold on her back as it sank into
my bones. I looked and listened with her, noticing several lines
of tracks radiating off to the activities and homes of various
boreal denizens. I thought this dog has it right, excited and
curious at the drop of a hat, attentive to the moment, and fully
engaged in and knowledgeable about her home. OB

1/3/00 – On New Year’s Eve, Karl Hansen and Lee Stewart got
married in the Sawbill Campground. The ceremony was held in the
campsite where they first met each other, 43 years ago. In the
twilight, the path to the service was lit by candles burning in
large blocks of ice. A fire burned brightly in the fire grate.
The Rev. Peter Monkries officiated over a brief (thankfully) ceremony
with approximately forty friends and family looking on. Snow drifted
straight down and the guests lit sparklers to celebrate its conclusion. 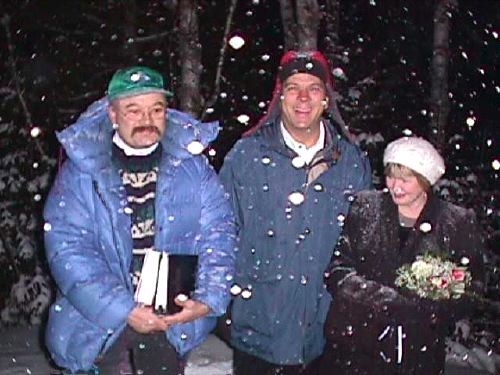