2/28/00 – Puddles, birdsong, swelling buds, slushy lakes, closed
ski trails – all the signs of mid-April are here. The warm, dry
winter has culminated with the earliest Spring in history. While
there is plenty of time for more winter, the weather service is
predicting the current weather pattern to hold for quite awhile.
If it doesn’t change, we could be canoeing by early April. – Bill

2/23/00 – We received the following email and picture today:

Attached is a bitmap I put together as I was thinking of summer
nights at Sawbill. I hope you enjoy it as much as I enjoyed putting
it together. Hopefully the download wasn’t too awfully long!

Take care, stay warm and we’ll see you again when the ice is
gone. 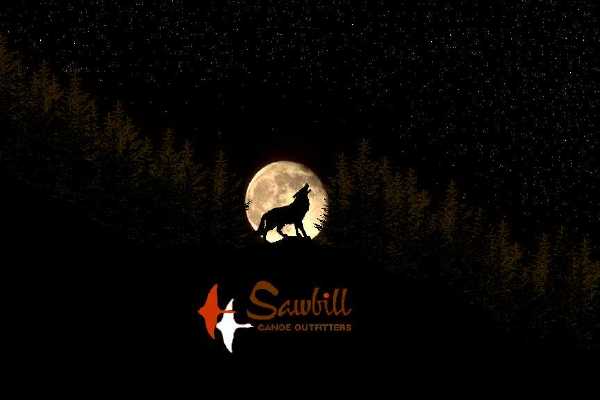 2/19/00 – Gorgeous moon in the sky! I hope it shined as brightly
on your homes. I skied out with the dogs and listened to a very
bright night. The lake’s winter tarmac held thousands of specks
of moonlight. An owl’s call took the breathing out of us, as we
strained to hear it again, faintly we heard voices camped on Alton.
The dogs were dark red stains on the snow. They tended their snow
packed paws, making small sounds that ballooned, then snapped
in the sub-zero air, crunching back to the surface amplified.
There was good ski skating on the packed trail heading up the
lake. We rounded the point leading to Alton, passing through a
forest of perfect tree shadows, painting us like galloping zebras.
We skied and ran hard, returning with a frosting of breath on
our collars and fur – souvenirs of the white night. OB

2/17/00 – The snow has been so gentle and delicate. Over the
past four days, snow has been in the sky a majority of the time,
yet the accumulation has been a scant two or three inches. It
moves like tiny bubbles, amounting to about the same in terms
of moisture. A handful of the stuff is a pile of feathers. In
fact, the crystals of this snow look very much like down, but
down from an exotic bird. The crystals interlock like down and
have the same opaque appearance, but the snow is even finer and
is bluish like the purest frozen seeps of winter cliffs. To complete
the image, the down is not evident at the surface where the warmth
of the sun polishes the snow into the whitest linen. The top layer
has to be peeled back, to see how it fluffs for miles and miles.
What is it like for the vole or mouse to move through that layer?
There are special meeting rooms in Oz convention centers like
that, and cotton candy tunnels ala Willy Wonka.

I just checked, and that layer of down is already breaking
up. Soon it will be a micro layer of delicate shards in the stratigraphy
of the season’s snows. There are special layers in the snow each
season. The last unusual layer was the day Bill photographed the
frosting on the trees (see the picture from 1/27/00 below.) Those
crystals were woven by the trees all night. In the morning, they
gave them to the wind who flew them like tiny kites. The wind
moved on to other pursuits and left them all over the snow, glistening
fragments of mica. Those are rare sheets of snow, I think about
them all the time, like Charlie fixated on the golden wrapper
layered in with the other millions at the Wonka factory. OB

2/16/00 – Bit of a shock the other day. Gust our older retriever,
caught and badly maimed a pine marten. It was a vicious sight
and extraordinary because the hundreds of chase hours logged by
Sunnie and Gust have, to the best of my knowledge, resulted in
one squirrel kill (nearly botched). Imagine my surprise when I
looked out and saw Gust’s jaws firmly clamped around the belly
of a pine marten. The violent shaking was a terror, and I noted
rarely seeing Gust in such a no-nonsense posture – hackles up,
legs spread wide to support the blurring shakes, and an overall
firmness of muscle and intention I had not considered in this
slightly over weight, lounging retriever. Despite this intensity,
this was a big chore, and I began to wonder if Gust had the requisite
know-how to satisfy the urgings of his instincts. Gust employed
a strategy of brief, vigorous shakes, after which he would hold
still for a quick assessment. Each time he found the pine marten
"coming to", diving in for a violent kiss. After one
session, the marten appeared to make contact with Gust’s nose,
prompting a dropped marten, which immediately lunged for a nip
at Gust’s paw. Gust leaped away and both animals sat a few feet
away staring into space. The marten’s back was broken and it began
to feebly drag itself. Sunnie, inexplicably, skulked in the woods
apparently conflicted. Gust continued to stare. In the interest
of hastening the marten’s last moments and avoiding anymore bites
which might result in a trip to the vet, I intervened, finishing
the marten with the .22 rifle. It was sad, as I enjoy watching
the martens, especially this year as we have kept them out of
the buildings!

The moment when Gust stared into space is etched in my mind.
It seems a defining moment, one I cannot imagine a wolf enacting.
It seemed a sensation of genuine confusion, where instinct was
at odds with experience. My hunch is that wolves have learned
by experience to avoid martens whose bites and viciousness are
as painful and willful as the action of a sewing machine engaged
in an errant finger. I also suspect, if a wolf were in the act
of killing a marten it never would have turned its back on it,
but instead, switched to a more decisive grip to the neck.

The whole scene was a little disturbing, not because of the
violence, but for the sense of an act poorly done. In our cultivation
of dogs, something like the spring of a venus fly trap was lost.
Dogs are dependent on us, like children, but sadly they never
blossom into beings of independence and skill. Though their need
for us is comforting, it is also a burden, especially on days
like yesterday, realizing that there is a yearning buried deep
under mounds of Purina, which is cut off from the daily cycles
of snapped necks, clasped talons, rabbits becoming lynx, and tearing
red muzzles. OB

2/9/00 – We received the following email and photo the other
day:

This is a picture taken on July 4, 1999 minutes before the rage
that occurred that day. We had taken shore on the north end of
Sawbill Lake at the 2nd or 3rd campsite on the east side of the
lake. The time of day is about 12- 12:30 PM. Notice how dark it
is. Within minutes of this shot, it was even darker and the air
was filled with water, both from the rain and from the lake. 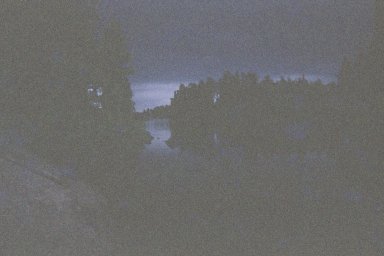 2/2/00 – Many of our canoes pass through the work shop during
the winter for routine maintenance. I look at all the scratches
that build up over the seasons and see that the canoes come to
have a certain luster, a broken in look. Though the new canoes
look more crisp, the older canoes have a seasoned look, softened
at the edges, seemingly more fit for this landscape. I know many
of the canoes by sight, and mainly I conceptualize them as our
canoes, seeing them in my minds eye either on the racks or stored
for the winter. Today, as I stood with four canoes in the workshop,
I thought of how many stars or raindrops they have sat below patiently
waiting on distant shores. I wonder about the waves a certain
canoe has traversed, or the drift another performed at the stillness
of a moose sighting. I see one is newer, probably not yet made
it over to Kekekabic or east to Gaskin. Likely it will be steered
there soon, en route occasionally bumping a bit of the country
or resting against a log under a swarm of black flies and a worn
out portageur. The path will take away the shine, just as the
wind transforms the youthful symmetry of the white pine. Then
the canoe will be broken in, and after another year or two, we
will sell it to one of you who have come under the spell of this
place too, and having weathered a few storms and rocky portages
are getting to know it well enough to explore it on your own.
OB