4/25/02 – The ice left the south end of Sawbill
Lake today. It was unusual because the temperature never rose
above freezing. The 30+ mile an hour west winds probably made up
for the lack of warmth. I am guessing that Alton, Cherokee and
most of the larger lakes are probably still ice covered. 3"
of snow is forecast for tomorrow night, so summer has not arrived
quite yet. – Bill

4/20/02 – We are considering renaming this page
"Don’s Hair Page." At his official birthday party last
night the friend who gave him the nearly shaved head a few days
ago tried to make up for it with her gift. – Bill 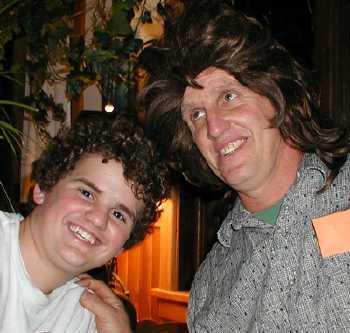 Don (again on the right), obviously passed the
hair gene to his son Elliot.

4/19/02 – Don Noyce, easy going carpenter on our
construction crew, surprised us with a new hairdo a couple of
days ago. He was getting a hair cut from a friend who made a
mistake and ended up solving the problem by all but shaving Don’s
head. Yesterday was his 50th birthday, so Cindy celebrated both
events with one of her famous creative cakes. – Bill 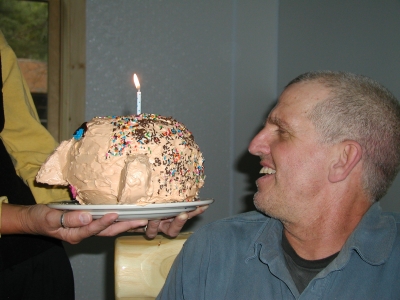 4/17/02 – A high of 77 degrees yesterday and
today’s strong winds are doing wonders to reduce the amount of
ice on the lake. There is 12" of solid ice and no slush. The
lake is a very dark gray and the ice has melted around the shore
leaving a few inches of open water at the edge. – Beth

4/16/02 – The signs of spring are everywhere
right now. The pussy willows are erupting, the canoes are coming
out of hiding from under piles of snow, the birds are filling the
air with songs, and Mary Alice’s tulips seem to get taller by the
hour. Almost every day during the past week a new type of bird
has returned from winter vacation. The first robin appeared last
week with a very disgruntled look on its face as it stood on the
side of the road and watched it snow. They are happily singing
loudly now with the warm weather. I got a close up look at a pair
of pileated woodpeckers when I scared them out of a ditch while
out for a walk. The juncos arrived this past weekend in huge
flocks. A gaggle of Canada geese honked a hello on their way
north one afternoon. A few purple finches have been around the
feeders and Bill said he saw a number of thrushes today. As of
last night, the lake still has 18" of solid ice but the
slushy layer on top has disappeared. -Beth

4/15/02 – We are experiencing some fast melting
here at Sawbill in the wake of unseasonably warm weather. As a
side effect of the melting, a beautiful ground fog developed over
the lake last night at sunset. We all took a walk down to the
landing to enjoy the warm breezes and magic light. Beth drilled a
hole on Saturday and found 20" of hard ice with 8" of
watery slush on top of that. – Bill 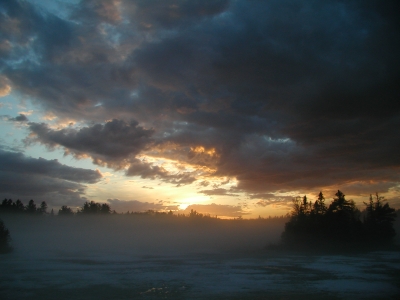 Looking west from the Sawbill Lake canoe
landing about 7:30 pm. 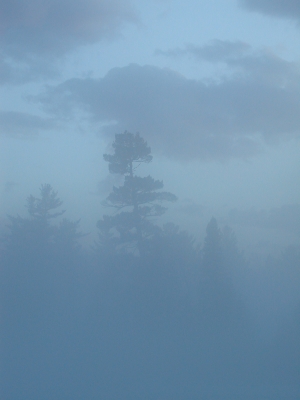 A pine in the fog across the bay.

4/11/02 – Some of the Hansens just returned from
the Caribbean island of Anguilla. Cindy’s mother, Arline, was
vacationing there with her boyfriend, Keck Melby. Keck flew his
four children, five grandkids, Arline’s two daughters, and her
four grandchildren down as a surprise for Arline. Fortunately for
me, spouses were included. We all gathered at one end of a beach
the first morning while Keck got Arline set at the other end of
the beach. His sister and a friend (who live on Anguilla),
unfurled a large banner and walked down the beach. The banner
said, "Arline, Will you marry me? – Keck." As soon as
Arline got over the shock of the banner, the entire family came
walking down the beach in a group. She was completely surprised.
She agreed to marry him and the wedding took pace the next day.
We then spent six more days lying in the sun, snorkeling,
swimming, eating and generally enjoying the island life. It was a
tough job, but somebody had to do it 🙂 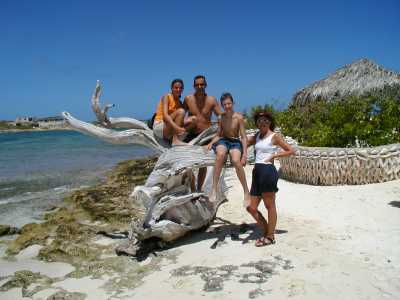 Clare, Bill, Carl and Cindy Hansen on the
paradise island of Anguilla.

4/8/02 – Yesterday a burst of spring appeared.
The thermometer proudly showed off temperatures in the 50’s and
mud puddles sprang up everywhere. The gray jays are showing up
everywhere again. They disappeared for a while during the time
when they were nesting. Now, their babies should be almost at the
fledgling stage and the adults are becoming more active. I saw at
least 6 or 7 in the trees lining the road a few days ago. -Beth 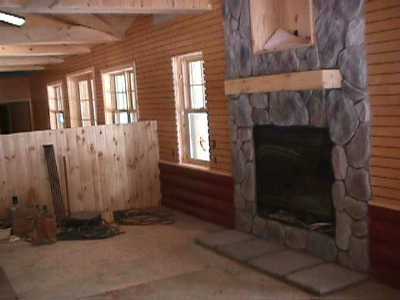 The finished stonework on the new fireplace.
The painting is complete and the wood slatwall paneling is
installed.

4/5/02 – Around mid-afternoon, former Sawbill
crew members Dave Freeman and John "OB" Oberholtzer
skied into Sawbill after a few days of winter camping. They
started at Baker Lake, worked their way up to Cherokee and then
headed back to Sawbill. When I asked how things looked out there,
they answered simultaneously "Wintery!". They saw no
signs of spring break-up or melting and the packed snow held them
on skis. Hans (of the store building crew) said he had been ice
fishing yesterday about 20 miles from here and the ice and snow
cover on the lake was around 40" deep. I became curious
about Sawbill so the dogs and I dug out the ice auger and headed
for the middle of the lake. I didn’t put on skis or snowshoes and
the snow held in most places, only occasionally breaking through.
We discovered that the packed snow is about 6" deep and the
ice underneath is around 24" deep, with a slush layer
between the two. It’s been cold the past few days, but warmer
temps are forecasted for next week. Maybe the melting will begin
soon. -Beth

4/4/02 – Yesterday evening the dogs and I went
for a walk. The sun had begun to set and by the time we turned
around to head back, it was getting quite dark. I was pausing
every few minutes to look up at the stars which were beginning to
make their evening debuts. During one of these stops, a bit of
movement off to the side caught my eye. I focused on the object
at the top of a 30 feet tree. The first thought that came into my
head was "Its a chicken up a tree!". It was actually a
grouse eating catkins on the very top branches of a birch tree.
But at that point in the evening, I could only see silhouettes,
no details or color were visible – and the outline looked just
like a typical barnyard chicken. Grouse always amuse me when they
are up in the trees. They are such a large bird and they perch on
very thin branches trying to reach all the juicy morsels they can
– but, to me, they look completely out of place. I keep expecting
to see the branch bend, and in cartoon style slow-motion, the
bird silently and motionlessly slide from the branch and tumble
to the ground. So far, all the birds have stayed in the trees.
-Beth

4/2/02 – More progress on the store to report.
The painting in the store and outfitting area is complete. The
rock work around the fireplace should be finished up today. The
offices and food department just need light fixtures and outlets
and then they will be complete. The little pieces are starting to
fall into place. Its looking great.

A sure sign of spring came the other day. New
canoes arrived! They were delivered with a protective plastic
sheet wrapped around each one, making them look like 19′ long
cocoons. I unwrapped them yesterday and the smooth, shiny yellow
brilliance of a pile of unpaddled canoes filled the yard. -Beth