3/29/02 – Weather in northern Minnesota is a very
dynamic thing. It’s not uncommon for the temperature to vary by
30 or more degrees from one day to the next. Even within the same
day, the weather can change dramatically. We experienced that
phenomenon yesterday. After the initial storm left us with about
3" of snow, we had a break for an hour or so. I was just
considering plowing when the snow began again. This time the
flakes were much smaller and it was more on the verge of rain.
The earlier snow packed down and started to break up some. By
early afternoon the second round of snow had passed and the
clouds began to drift away. Around 3:00 the sun was poking
through the clouds and the snow encasing the trees began to melt.
So much moisture was coming off the trees it wasn’t just
dripping, it was literally raining off the trees. By late
afternoon it was the warmest it had been all day and felt like
spring again. I was sure I could even smell a bit of pine sap in
the air. We had gone from January to April in about 10 hours. The
evening remained clear and a brilliant full moon rose early. I
walked outside around 11pm and looked up at the moon which had
traveled to nearly the high point in the sky. All the moisture in
the air had created the perfect conditions for a moon halo. A
pearly white ring completely encircled the moon. It was a
beautiful sight. – Beth 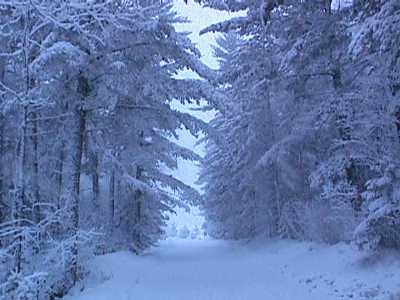 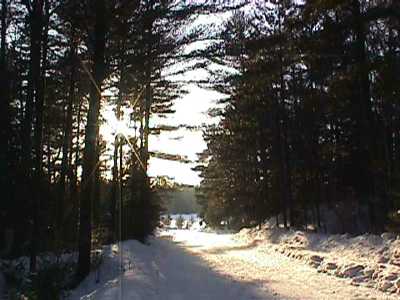 3/28/02 – We’re having a snow day today. I was
thinking yesterday that I should write a little about all the
signs of spring that have been popping up in the last week or
two. And then this morning I woke up to a snowstorm. I don’t
think I’ve seen it snow this hard all winter. Huge, wet flakes
are pouring down, sticking to everything so that the south sides
of all the trees look whitewashed. Then the wind picks up and all
the snow stuck to the branches comes avalanching down. Homer and
Sunnie look like wooly sheep when they come in after sitting
outside for just a few minutes. You can tell its an early spring
snow because its incredibly heavy wet snow – the thermometer is
sitting right around 32 degrees. About 3" have fallen so
far. I heard we may get up to 6", but the snow has let up
right now. It may be time to go fire up the plow. – Beth 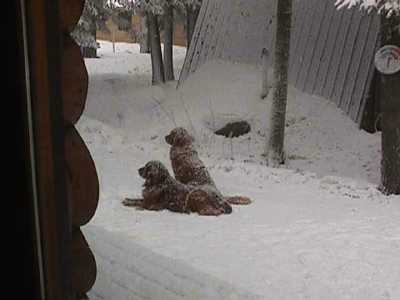 Homer and Sunnie seem unfazed by the snow.

3/26/02 – I skate skied on Sawbill and Alton
Lakes tonight at sunset. I heard from a friend in Ely that the
lakes in that area have a firm enough snow crust to hold up a
skier. The lakes here are not quite there yet. I mostly stayed on
top, but every 30 seconds or so, my ski would break through the
hard-pack into the soft snow below. This sent me sprawling, so I
learned that I had to make my way guardedly. In spite of that
impediment, it was a gorgeous time to be out on the lakes. The
recent high winds have sculpted wild drifts that are terraced
like a giant architect’s landscape model. The low angle of the
sun brought each minute terrace out in sharp relief and gradually
turned them from white, to gold, to pink and finally purple. On
Alton, I came across some huge fresh wolf footprints. The wolf
was following an old snowshoe trail, which I soon discovered was
firmer than the rest of the lake surface. Near shore I found a
small hole of open water. It was surrounded by otter tracks and
littered with the claws and heads of crayfish. I counted 24 sets
of claws. As I headed home, the light faded and a huge moon
lighted my way home. – Bill

3/20/02 – Winter is hanging on here at Sawbill. I
heard on the radio today that it is likely that March will stand
as the coldest month of the winter this year, for the first time
in the 110 years that records have been kept. We are still skiing
on our groomed ski trail here at Sawbill. The lakes still have a
foot or so of soft snow on them. The lakes and rivers will become
skiways as soon as the days get warmer and the nights stay cold.
It is a phenomenon that we wait for each year. We can skate ski
across the lakes and down the rivers with so little effort that
we all feel like Olympic skiers.

With the recent, if tardy, snowfalls and the rain
we had last Fall, it is a good prognosis for the canoeing season.
Ice out should be fairly close to normal (end of April/beginning
of May) and water levels will be good. – Bill

3/13/02 – We’ve had a few requests for pictures
of the construction progress. Its a little difficult to take
pictures in the store that really do justice to the project. But
I gave it my best shot and here they are. The ceilings in the
store and outfitting area have been paneled and are beautiful.
The sheet-rock is almost finished in the store/outfitting also.
Then the painting will happen. The sheet-rock and painting in the
new part of the building has been finished and the flooring and
carpeting will go in next week. Then the new part – including the
new offices and food department -will be ready to has things
moved in. – Beth 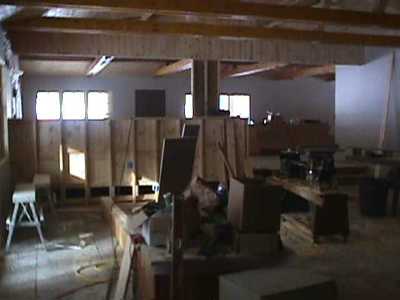 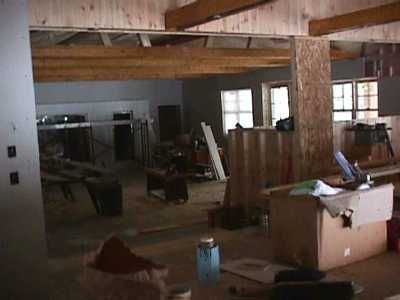 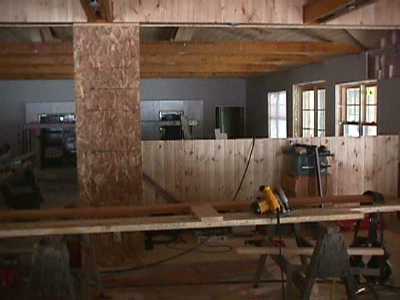 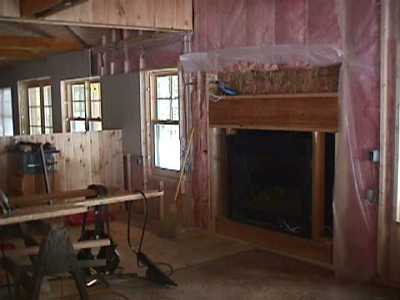 This is a closer look at the book/fireplace
area. There will be a couch and a couple of chairs in this area,
as well as a TV above the fireplace to watch the Forest Service
video.

3/12/02 – Spring fever has hit some of us here at
Sawbill. Cindy and I were in the cities this weekend and stopped
in Duluth to have a little bit of color added to our hair to help
us through the last leg of winter. We were rather excited and
talked about it at coffee break with the construction guys. Grey
said his wife, Sue Jordan (former crew may remember her from
Northland Hardware), had also been to the salon in Duluth and
came home with short spiked hair with fire-engine red streaks. He
said it looks great. Don, being the slave to fashion that he is,
didn’t want to feel left out of the hair color craze, so he and
his wife Patty decided to glamour him up over the weekend. He
out-did both of our hair colors when he took his cap off this
morning to reveal a head full of purple tinted hair. He looks fabulous! 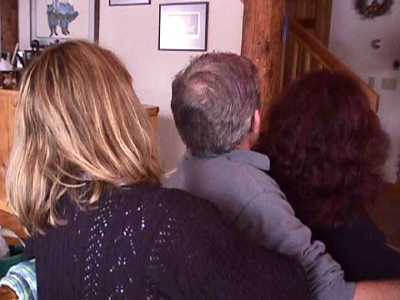 That’s not your natural color Don?

3/5/02 – Cindy and the kids saw three wolves near
Tofte on the way to school yesterday. They got a good look at
them as they ambled away. I saw two wolves on the highway
Thursday night. Last night, a flying squirrel glided down to the
bird feeder while Beth and I were watching. Flying squirrels are
common here, but are nocturnal, so rarely seen.

I was able to perform another stranded motorist
rescue on the Sawbill Trail late Thursday night. I was returning
from the Richard Thompson concert in Duluth just before midnight.
The concert was wonderful and I felt fine when I left Duluth. As
I passed through Two Harbors, my stomach began to churn and by
the time I reached Silver Bay I was in the full grip of the 24
hour stomach flu – vomiting, fever, aches and all the rest. I
relieved to finally turn up the Sawbill Trail in Tofte, headed
for my own warm cozy bed. Eight miles up the Sawbill Trail a dark
form emerged from the woods onto the road. I assumed it was a
moose, but I was surprised to see that it was a woman in a large
black coat. She had mistakenly tried to drive on the unplowed
Honeymoon Trail and got stuck in the middle of that road. She had
walked for an hour and a half in the -5 degree night. She had no
hat of gloves, but fortunately was able to protect herself with
the large wool coat. I called Bud Nelson, our local tow truck
operator, on the radio and waited with her until he arrived. When
I apologized for being so sick, she said "I just had the flu
four days ago." She was sympathetic and not off put by my
forays into the ditch to hurl. – Bill