6/23/02 – Its been a stormy, steamy summer
solstice weekend. The dark clouds started rolling in around 1:00
yesterday afternoon and after a few downpours, a slow steady rain
fell. It began to clear off a little in the evening – just enough
to reward all of the soaked campers with an intense fuchsia
colored sunset. While the sunset faded, a new storm was gaining
strength in the southern edge of the sky and an impressive
lighting storm began. All the while the fireflies danced, excited
by so much amazing light at 10:00 at night. Dark clouds are still
rolling around in the sky today, threatening rain. But so far the
bits of blue sky have won out and no more rain has fallen. We
badly needed the 0.80" of rain that we received. -Beth

6/21/02 – With all the pictures of Homer and
Sunnie that have been on here lately, Alice the Cat has been
feeling a bit neglected. Alice, who will celebrate her 18th
birthday in August, spends most of her days sleeping in Bill and
Cindy’s basement and watching Star Wars. She is currently
rehearsing for a part in Episode 3 as a stand-in for Yoda. We
feel she has mastered the look. 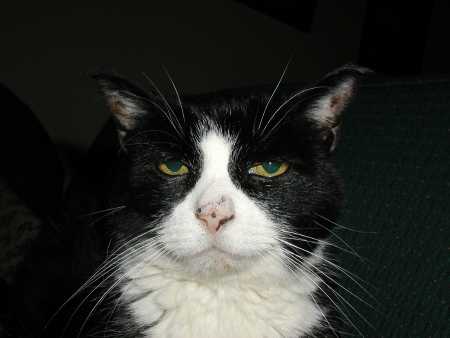 May the Force be with You.

6/19/02 – On a typical day at Sawbill, someone
cooks brunch and dinner for the rest of the crew. Since Sawbill
is open during these times, we eat in shifts and the whole crew
is never able to eat together. Occasionally, so that we can all
sit down and enjoy a meal at the same time, a Festive Dinner is
planned. A special meal is made and served after Sawbill closes
for the evening. Last night we had the first Festive Dinner of
the summer. Laura and Shannon made an outstanding meal of
homemade pasta, a variety of scrumptious sauces, salad, and a
spectacular batch of tiramisu. Dinner was served by candlelight
and evening wear was required (although we did allow in Chacos
and a few pairs of Carhartts). 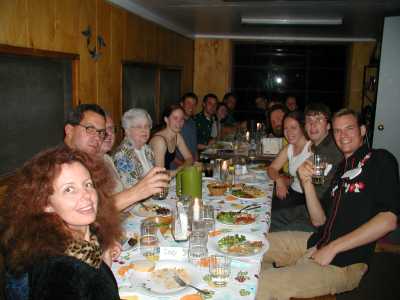 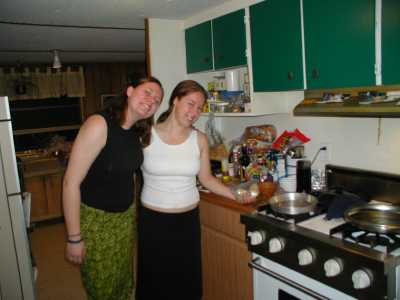 The crew cleans up pretty good. Shannon and
Laura – creators of the feast! 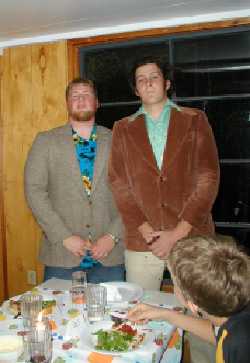 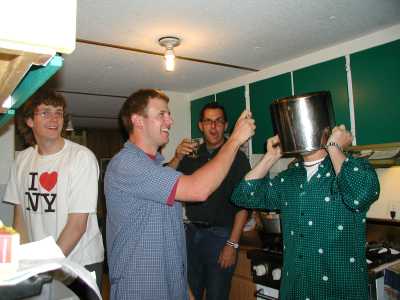 Nathan and Adam, The Sawbill Thugs – don’t mess
wid ’em. The clean-up crew – what a bunch of pot heads!

6/16/02 – Homer the Dog is on the road to
recovery. He has been sick with blastomycosis. The vet has said
he’s well on his way to being back to his usual self, although
the vision in his left eye still hasn’t returned. He remains in
good spirits and has an amazing appetite. While down at the lake
taking a picture of Homer, we walked a bit along the path by the
lake and came across a pink ladyslipper in full bloom. I searched
around the area to see if there were others and found one smaller
one a short distance from it. The plant book says it is one of
the largest native orchids we have and is also called a pink
moccasin flower. 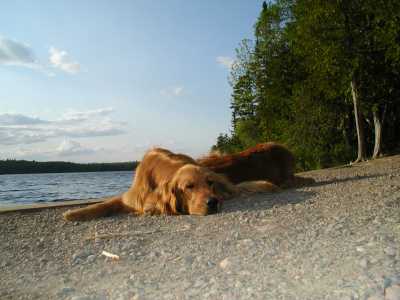 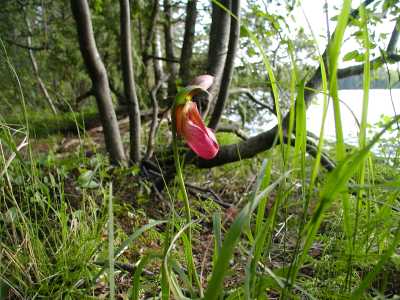 Homer is back to his normal activity levels. A
Pink Ladyslipper on the shore of Sawbill Lake.

I’m happy to report that Bill Hansen received the
DFL party endorsement for the District 6A seat for the Minnesota
State Legislature at the endorsing convention yesterday in Two
Harbors. You can check out more details about the convention and
his campaign at Bill’s
campaign website. – Beth

6/13/02 – A few days ago, a hummingbird somehow
found its way into the new store. The skylights in the store
ceiling looked like an easy escape route for the bird.
Unfortunately for the bird, there are screens in the skylights.
Crew member Nathan TerBeest came to the rescue and managed to
trap the hummingbird in a water pitcher and safely release it. 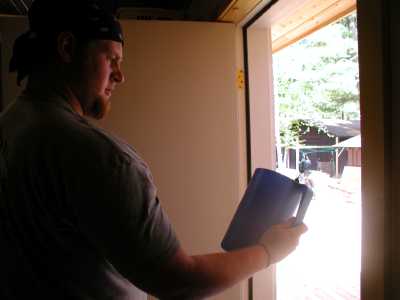 A big Beest and a little beast (you can see the
head of the bird in the pitcher).

I was about half-way between Sawbill and Grand
Marais last night when I passed a small swampy area, and right in
the middle of it was a young bull moose having dinner. I figured
by the time I slammed on my brakes and backed up far enough to
see him, he would have been scared away. But he just glanced up
at me, continued chewing and seemed not to mind a bit. The swamp
he was in is right on the side of the road, so I was only about
20 feet from him. I rolled down my window and could hear him
blowing bubbles in the water as he dug for plant roots and
chewing the tasty morsels he found. He was a young bull with a
small velvety rack. His summer coat was almost completely filled
in – a dark coffee color. I watched him for about 20 minutes as
he continued to eat, occasionally glancing towards me, and also
behind him. I started the car and began to drive ahead. Instead
of looking at the noisy car, like I expected him to do, he
glanced behind himself. I looked back and there was a young cow,
about 100 feet behind him – waiting for me to leave so she could
join her dinner date. – Beth

6/12/02 – Summer has hit full stride in the last
five or six days. A little rain has fallen, the leaves are fully
out, and flowers are blooming everywhere. The bugs have been
relatively scarce so far this summer. There were only a couple of
days when the black flies were pesky and only a few mosquitoes
seem to be buzzing around right now.

Work continues on the exterior of the building.
The stonework on the chimney was recently finished and the guys
are currently working on the screen porch. 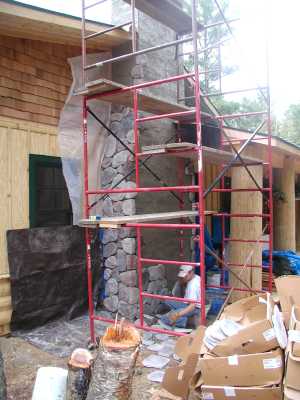 6/2/02 – Its time for updated pictures of the new
store. The inside is completed but the outside still has some
work left on it. Since its the beginning of season, we decided to
combine the new store pictures with some staff training photos. 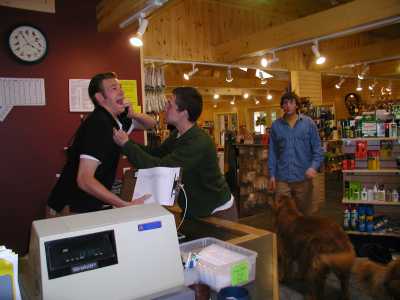 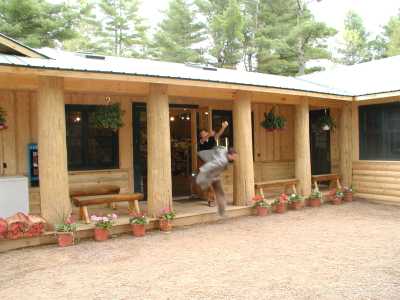 Max stands at the new outfitting desk,
remembering the importance of good service. Justin, taking on the
customer role, tries to break his cool demeanor. Jeff stands back
and learns. Max shows Justin the front of the new store –
although its a bit of a blur for Justin. Max, what happened to
the customer is always right? 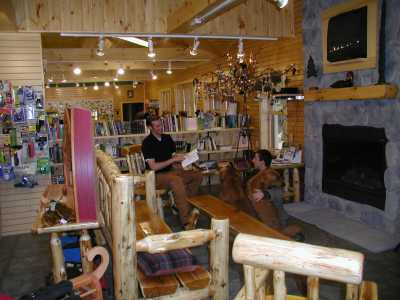 In the end, Max and Justin decide its better to
just get along and share a story in front of the fireplace with
Homer and Sunnie.