7/27/02 – Gray clouds had been threatening all
day, and finally around 4PM, the thunder and lightening started.
Before long, an all out downpour began. Its been so dry here that
the ground soaked up everything it could for the first few
minutes and then the puddles sprang up. The newly finished screen
porch was the perfect spot to sit and watch the storm blow in.
Since the gutters haven’t been attached to the store yet, it was
dangerous to walk by some of the overhangs, which were throwing
off more water than the showers. Three hours later, the steady
rain continued and the puddles were turning into rivers. The pop
shed nearly washed away into the Temperance River before Max
diverted the huge stream of water flowing under it. Its nearly
9PM now and a slow, steady rain continues to fall. 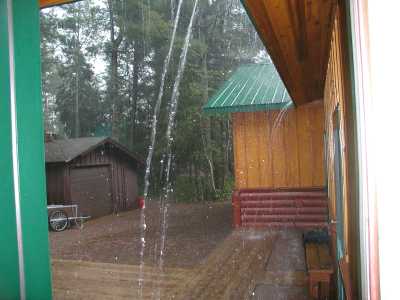 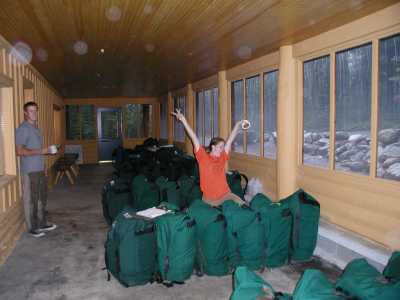 Water coming off the roof – free showers! Is
Betsy celebrating the rain or the fact that she just finished
packing for a church group of 57? Frosty is just plain
dumbfounded at how wet the front half of his pants got.

7/23/02 – Our heat wave has broken. People
returning from trips yesterday were wearing jackets and enjoying
the cool breezes after a few days of the heat. In the brightness
of the almost full moon, I could see my breath as I walked
outside last night. The loons seemed to agree and were loudly
celebrating in the fall-like night. -Beth 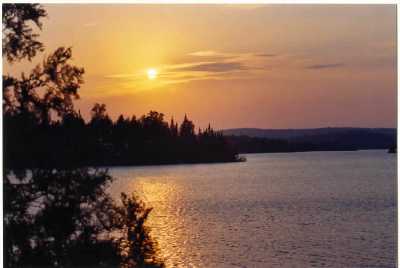 7/19/02 – The store is just days away from being
officially "Finished". The painters are cleaning up
their brushes for the last time today. While we’re sad to see
their cheerful faces leave Sawbill, we’re happy to have all of
the plastic coverings removed from the windows and feel the fresh
air blow through the store again. A few small projects are left
to be done and the plants and flowers for landscaping are
patiently waiting near the shower house for their permanent new
homes. 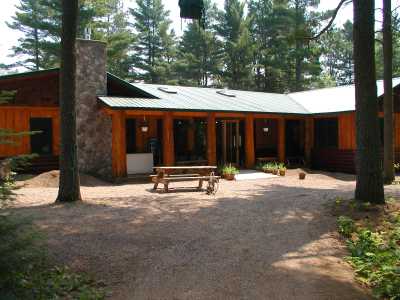 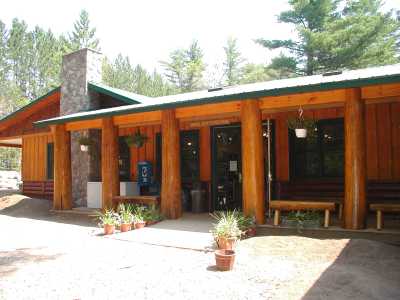 7/18/02 – We received the following message from
Steve Gendron, who takes a census of loons every year:

Hello Bill. The results of the 2002 Loon Counting
are in.

I am also happy to report the return of "Bullwinkle",
the young bull moose
I’d seen in the pond just off #170 for several years running but
haven’t
seen in 3 years. He’s got a pretty nice set of antlers but is as
photogenic
as ever.

7/16/02 – The weather continues to be hot and
dry. Its in the mid 90’s today. We just received notice that the
partial fire-ban will be reinstated as of Friday, July 19th.
Fires will be allowed only between 7PM and Midnight in the
designated blow-down area.

Its been a somewhat slow summer as far as fishing
goes. People are coming back from trips saying they caught enough
walleyes and northerns for a meal or two, but we’ve had few
reports of really great fishing so far. The small-mouth bass were
biting well a few weeks ago on Alton and Beth, but that seems to
have slowed down a bit. With the hot weather, the water levels
are dropping and the water is warming up quite a bit so I don’t
expect the fishing to pick up much in the next few weeks.

7/10/02 – The weather has finally cooled down a
bit here. We’d had a string of HOT, HOT days in the 80’s and 90’s
where it seemed necessary to spend more time floating on an inner
tube in the cool waters of Sawbill Lake than finishing work.
Today is a bit overcast with a refreshing breeze cooling us down.

There have been very few reports of bear
sightings or problems with bears in food packs so far this
summer. The invasion of the tent caterpillars provided lots of
food for the bears and kept them out of people’s cars and food
packs. The tent caterpillars have all but disappeared now and
we’ve had a bear roaming in the campground the last couple of
nights. It is a very smart bear that has specifically targeted
cars with food in them. So, if you’re headed up to the
campground, you’ll want to bring a blanket or something to cover
any coolers that are left in your car. Bears can recognize
coolers and go after them in cars. If you’re heading out on a
canoe trip, be sure to bring bear ropes for tying your food bag
up in trees. -Beth 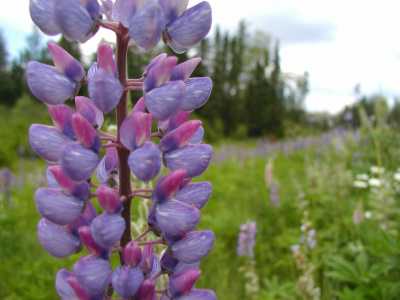 A field of lupine in bloom along the Sawbill
Trail

7/8/02 – Our wonderful Sawbill Campground hosts,
Jim and Rachel TerBeest, arrived a couple of weeks ago from
Omaha. Joining them on the trip up were their daughter, former
Sawbill crew member Laura Strubbe and her husband Ezra, along
with Laura and Ezra’s daughter Tori. Tori, almost 2 years old,
became the official Store Greeter. Everyone who left the store
was sent on their way with a chipper "Bye Bye!",

The TerBeest’s have been enjoying their time here
and have come up with a new system for doing their campground
rounds. They tried using Rock, Paper, Scissors to determine who
would get to drive the golf cart, but neither wanted to ride
shotgun. After much debate, they came up with a method where they
could both be happy. – Beth 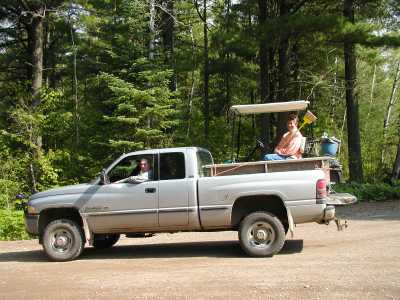 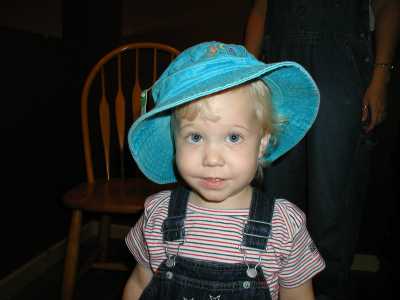 The TerBeest’s – both in the driver’s seat.
Tori modeling store apparel.

7/4/02 -The long 4th of July weekend has had a
sunny, warm, and busy start. The flies that follow the army worms
seem to be disappearing. They were incredibly thick for a couple
of weeks, forming solid layers on walls, packs, and people. The
mosquito’s seem to be picking up a bit. Construction work is
winding down on the store and the exterior painting has begun.
The bottom logs have received their brick red coating and the
rest will follow soon. 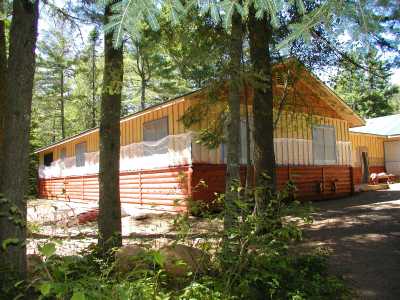 The back side of the half painted store.

A hard-helmut sized snapping turtle sunning on
the rocky shores of Duck Lake. Hazy sunsets and gentle south
breezes high above Little Sag. An afternoon splattering of
raindrops falling on the twisted and torn tree trunks of
Gabimichigami. Launching ourselves from the rocks of Malberg Lake
into the cool deep water, trying to escape the sun. A fish
dangling from the osprey’s talons, not ready to admit defeat over
the still water of Boze Lake. Six sunny, buggy days of exploring,
adventures, and laughter. -Beth 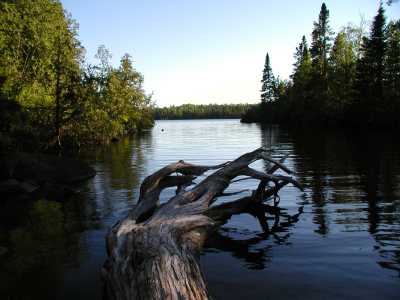 Mulligan – Grassy Portage, on the Brule
– Winchell route, has been impacted by beaver activities.
People who have traveled this way before may remember poling
their way through the shallow muddy waters of Grassy, and then
portaging along the edge of the dry beaver meadow of upper Grassy
Lake. This year, a new beaver dam has caused the water to rise,
flooding the old landings and some stretches of the Grassy –
Wanihigan Portage. Please give visitors (both those who are
traveling north from Brule, and people who intend to stay on
Brule but want to do the Lily – Cliff – Cones loop as a
day trip), the following advice: Bypass that route, and paddle
through the Cones and Cliff Lake to get to Winchell. This is not
only the easiest route, by far, at this point, but will also help
prevent the inevitable damage to vegetation and soil that comes
with people trying to get around wet spots.

Because beavers are a natural, and important, part of wilderness,
we won’t do anything to interfere with their activities.
People who choose to travel this route will find the Grassy
landings wet but reasonably easy to use. Northbound paddlers
should bypass the old landing on the south end of the Mulligan
– Wanihigan portage, and paddle through the grass to a new
landing further north along the shore. This will get them past
the most difficult flooded stretch. The new landing is hard to
spot – they should watch carefully as they paddle along the
east shore. Once on the portage, they’ll still have to get
through a wet stretch of about 100’ that’s up to a foot
deep.

This situation could change due to the beavers’ failing to
maintain the dam, to the expected drop in water level that
usually happens toward summers’ end, and to our activities.
Within the next few weeks we will probably do some work that will
make the new landing easier, and the old one harder, to spot,
possibly do minor rerouting of the Mulligan – Wanihigan
portage, or perhaps put a boardwalk across the deepest flooded
area.

Insect update: Looks like tent caterpillars are beginning to
pupate, so they should be disappearing, and bare trees beginning
to leaf out again, soon. Friendly flies were less numerous today
than they were over the weekend: still a nuisance, but not a
nightmare. The bad news is that mosquitoes were fairly thick on
the long, wet Grassy – Wanihigan portage – maybe we
won’t escape them this year after all.

7/1/02 – We have a new employee. With my run for
the legislature, I obviously won’t be of much use this summer as
a Sawbill employee. Peter Jordan comes to us by way of Indiana
and Illinois. He is an experienced camper and an Outward Bound
graduate. He plans to make his home in New Orleans after the
season ends. – Bill 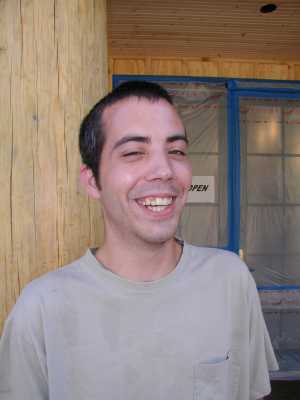