4/29/03 – If I were still a high
school junior or senior, I would jump at this chance. The Ely school system, in
cooperation with Camp Widjiwagan, is offering a full year residential wilderness
education program. Students will live at Widji and spend much of their time in
the wilderness. What a great opportunity! There are some scholarships
available. The deadline for application is June 1st. For more information,
email Jon Zebrowski at mailto:jzebro@ely.k12.mn.us
or call him at (218) 365-6166.

Another crew baby has arrived in the world. Dawn Brennan (Kaluza) who was a
Sawbill crew member from ’91 – ’93 gave birth to
her fist child, Joseph Thomas Brennan,  born April 9th at 12:23am.
He was pounds 7 ounces and 20 inches long. Mother, baby, and father, Tom,
are all thriving. 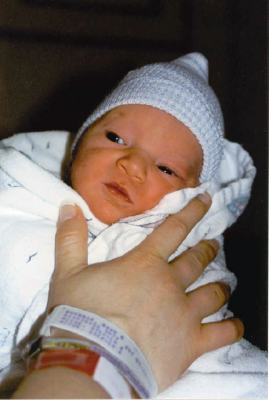 The ice is too rotten to stand on now, so I
can’t drill a hole to get the exact depth. It appears to be going fast and
barring any unusual change in the weather, should be out within the next few
days. 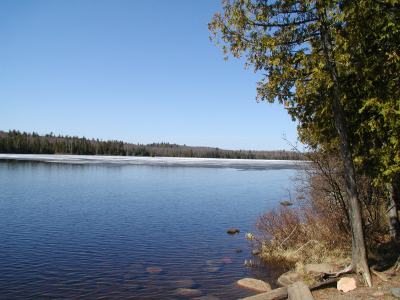 4/27/03 – As of today, Sunday, the ice on Sawbill Lake is 8" thick.
While still strong enough to stand on, it is showing signs of degradation. It
is very warm and windy today. If this weather keeps up Sawbill should be ice
free by the weekend. 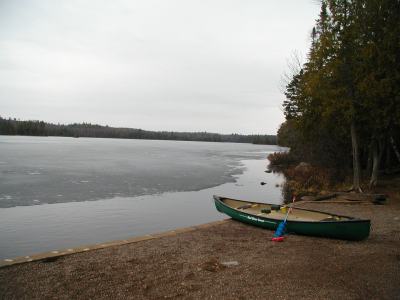 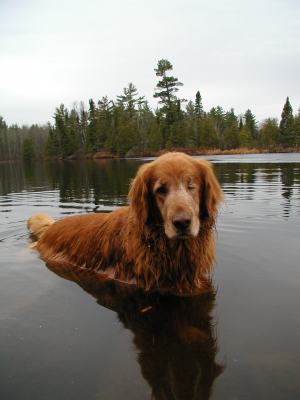 Sawbill Lake ice is gray and melted
away from shore. Sunnie can’t wait to jump in the lake each spring – impervious
to the freezing water.

Cindy, Carl, Clare and I just returned from a delightful vacation in
southern Utah. The highlight was a canoe trip on the Green River through the
spectacular red rock canyons of Canyonlands National Park. We rented canoes and
arranged for jet boat shuttle from the confluence of the Green and Colorado
Rivers back to Moab, UT with the excellent folks at Tex’s Riverways in Moab. 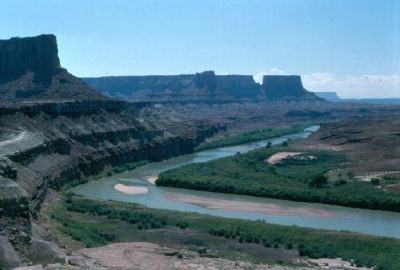 4/25/03 – The ice on the lake is 9" thick as of this morning. The days
continue to be warm and sunny but the night temperatures are still dropping
fairly low. The forecast calls for continued warm weather.

Frank Hansen would like to send a huge thank-you out out to everyone who has
sent cards, e-mails, and warm get-well wishes during his recovery from hip
surgery. He is up and around and looking great but not quite able to spend time
sitting in front of a computer yet to respond to the encouraging messages he
has been receiving. But he wants everyone to know they have been greatly
appreciated. -Beth

4/23/03 – I saw three moose while driving on the Sawbill Trail last night.
They are all in the process of losing their winter coats and look like they’ve
been half dipped in chocolate, with their back ends a smooth, rich, dark brown
of summer and their front ends a mottled, ratty, lighter brown of winter.

Despite the fact that the last three days have been beautiful with temps in
the 50’s and 60’s (the kind of days when you look for any excuse to get outside
– sweeping the porch was a critical task on my to do list today), the ice on
the lake has only melted about an inch in the past two days – it remains about
14" thick. Temperatures have been dropping below freezing at night which
really slows the melting process. The water levels of the area rivers are
rising and the Temperance River has flooded its banks. The water level at
Sawbill’s landing is 5"-6" higher than it was a few days ago. A big
contributor to this is the rain that fell this past weekend but there must be
some melting happening as well. -Beth 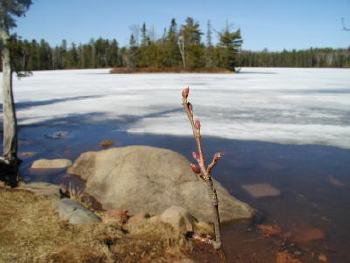 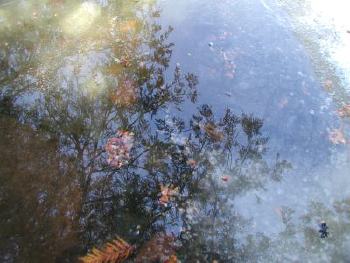 A dogwood shows its confidence in
spring’s arrival with some buds. A thin layer of ice formed overnight on the
little bit of water that has opened along shore.

4/21/03 – A solid foot and a quarter of ice remains on the lake. The ice has
pulled away from the shore slightly so there is a very narrow ring of open
water around the edge of the lake. Even with that much ice left, its made major
progress in the last week. The weather is predicted to be sunny and in the 50s
this week. A strong north wind is blowing today which always helps as well.
I’ll keep checking it and recording the progress.

Frank Hansen is coming home today from the hospital after having hip surgery
last week. He was supposed to go in to have a piece added to the artificial hip
he received last fall in order to stop the hip from dislocating. The surgeon
decided to replace the hip socket instead. Because of that, he’s been in the
hospital longer than originally expected and is excited to be returning home.
-Beth

4/20/03 – Some much needed steady rain has been falling since about noon
today and at times it has become quite heavy. I was planning on heading onto
the lake to drill a hole and measure the ice thickness but the weather is just
too miserable to check it today. This rain should make some major progress
towards melting it though, so if the sun returns tomorrow I’ll dig out the ice
auger. -Beth

4/16/03 – Nancy Cihlar was a member of the Sawbill crew back in the late
’60s and early ’70s. She settled in the area and has remained very close to the
Hansens and the whole Sawbill family. We are so sad to report that yesterday
her 17 year old son, Joe, took his own life. Please remember the Cihlars, their
family, and all their friends in your prayers. 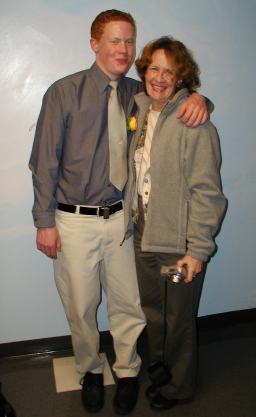 Joe and Nancy Cihlar just before the
homecoming dance, October 2003.

4/14/03 – It is an incredible 75 degrees here today. Despite the warm
weather, I cross country skied to the north end of Sawbill Lake last night. I
found a natural hole in the ice and measured 2.5′ of hard ice. I would imagine
it is even thicker most other places. There were a few small spots of open
water in the narrows. One of the unique features of late season ice is that it
shows all the tracks from the previous winter. As I skied up the lake, I could
see my ski tracks from late November. In a similar phenomenon, the ski trail on
the unplowed campground roads are visible after they melt by the even rows of
accumulated pine needles that blew into the tracks during the winter months. 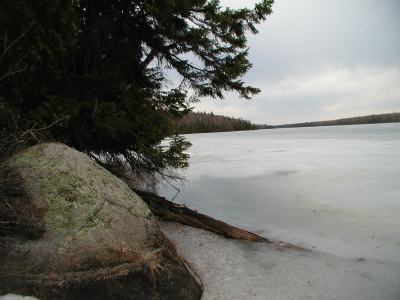 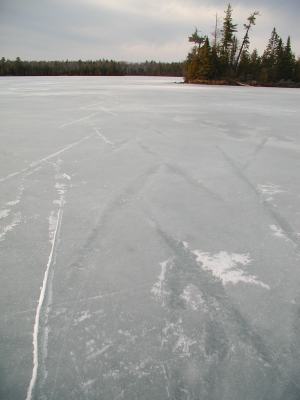 Looking north at the middle section
of Sawbill Lake on April 13th. New ski tracks on the left and tracks from
November on the right. 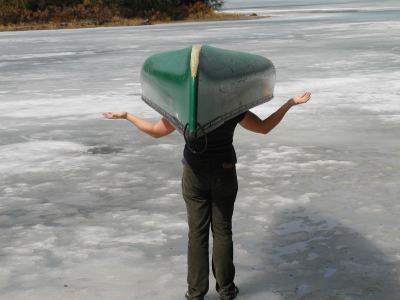 A canoeist wonders "Why?"

4/10/03 – We’ve seen signs of spring at the bird feeders lately. The purple
finches showed up a couple of weeks ago and have continued to become more and
more colorful. The juncos arrived about a week ago, and along with the sunny
warm weather we’ve had over last few days, give me hope that spring is here to
stay. -Beth

4/7/03 – Frank Hansen, co-founder of Sawbill Outfitters, suffered yet
another set back with the artificial hip that he received back in September.
Last Friday, it spontaneously dislocated for the fourth time. Frank made
another uncomfortable trip to the emergency room in Duluth, where the hip was
reset. He will be having surgery this Thursday to add another part to the hip
joint that will prevent further dislocations. Frank is discouraged by the
continuing problems, but looking forward to getting it resolved once and for
all.

We are starting to get inquiries about projected ice-out dates for Sawbill
and surrounding lakes. Two weeks ago, we would have projected an early ice-out
based on the unseasonable warm weather we were having at that time. Recently
though, winter has returned with over a foot of snow and temperatures below
freezing. Due to the cold, dry winter, the ice is unusually thick this year –
almost 4 feet thick on Sawbill. We have learned over the last 46 years that it
is nearly impossible to accurately predict the ice-out date. Statistically, it
averages around the 2nd of May, but we have seen it as early as April 11th and
as late as May 25th. We will post daily reports here on the newsletter once
significant melting begins.

Carl, Clare and Bill Hansen have all become enthusiastic snow boarders in
recent years. Yesterday, we built a jump on the steep hill that leads to the
Forest Service cabin at the end of the Sawbill campground. Cindy documented the
three shredders as they learned how to fly. – Bill 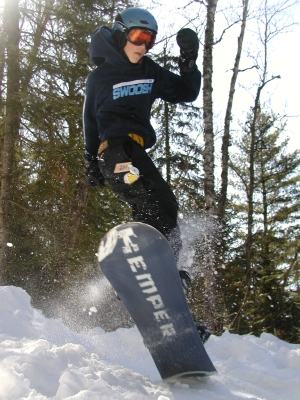 Carl and Clare practice their
boarding skills deep in the Superior National Forest. 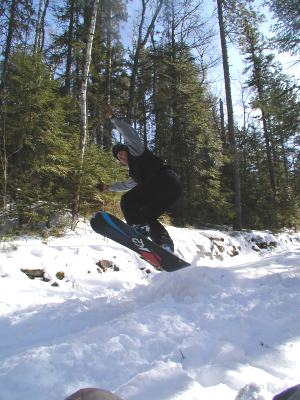 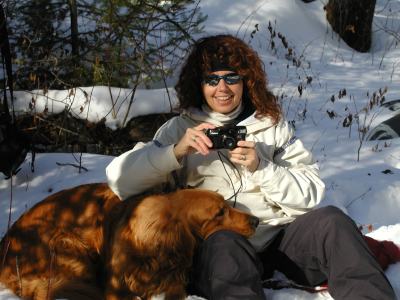 Even the old man can catch "big
air" while Cindy and Homer document the moment.