12/31/03 – This is a surprisingly busy time
of year at Sawbill. It is the time when we are constantly
surrounded by family, friends, former and current crew members.
The days are filled with cross country skiing, downhill skiing
and snowboarding, ice fishing, cooking, eating, drinking, game
playing. laughing, saunas, music, dancing, and constant
conversation. In between visitors, we have been traveling to
Carl’s cross country ski meets and practices. Tonight we will
bring in the new year with board games and the traditional
midnight ski. We are thinking of everyone who is not with us and
hoping for you to have the happiest, most peaceful new year
possible.

While walking across the lake to set up the
fish house we came across the very fresh footprints of a large
lone wolf. Perhaps it is the black wolf that we have been seeing
all year. He was most recently sighted by the county grader
driver just a few miles north of Tofte. It is not unusual for him
to travel over twenty miles in one day. – Bill 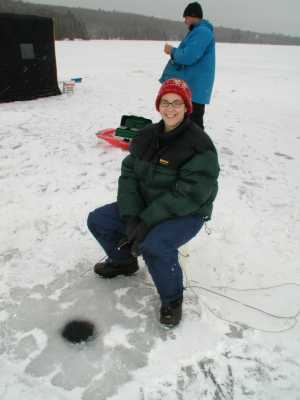 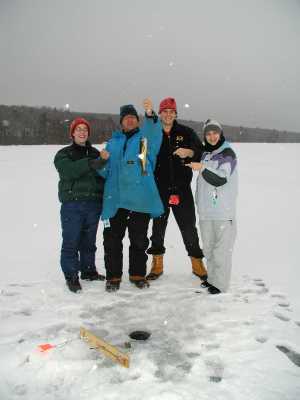 Ruthie maintains vigilance
in the traditional Minnesota manner while Bill baits a hook in
the background. Ruthie, Bill, Adam and Clare Hansen show off the
result. (Photo by Lida Storch.)

12/15/03 – Brian Tofte and his son, Eric,
were fishing on Sawbill Saturday when a mink came running across
the lake and ran right up to Eric. He started feeding it minnows
and it hung around all afternoon.

Eric Tofte and his new friend on Sawbill Lake
about half a mile north of the canoe landing, 12/13/03.

12/11/03 – The great horned owl that ran
into Cindy’s car awhile back is now a resident of the Minnesota Zoo. Although
he recovered from his trauma pretty well, the vets at the Raptor Center
determined that his eyesight was damaged enough that he shouldn’t
be released back into the wild. – Bill

12/10/03 – Schroeder resident, Charles Lamb, and his son Will
have been fishing regularly on Alton Lake. They came in about 9
PM last night and reported good walleye fishing. They had been
getting just a few fish per day.

Last weekend was a festive one here at Sawbill. Some of us
traveled to the big city of Duluth for two days of bowling,
movies, shopping, holiday parties and meetings. On Sunday we
gathered our Christmas tree, an elaborate event that includes
many odd traditions and jokes. Eventually, we did return with a
lovely tree. We also celebrated Carl Hansen’s 14th birthday.
Cindy out did herself with a custom cake portraying Carl, Clare
and Bill on their snowboards and Cindy on skis having a close
encounter with a tree. – Bill 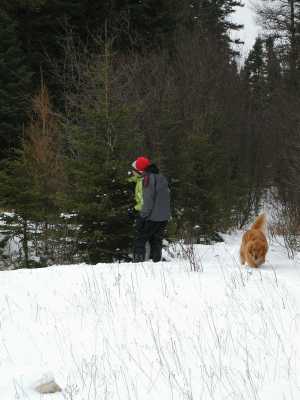 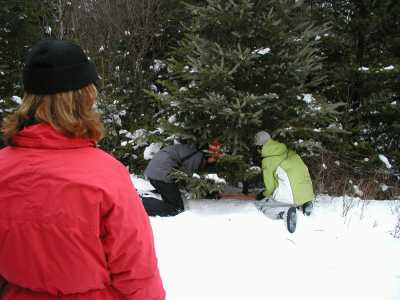 Carl and Clare scout for, and finally cut the
perfect tree. 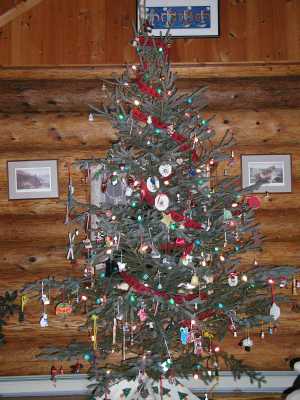 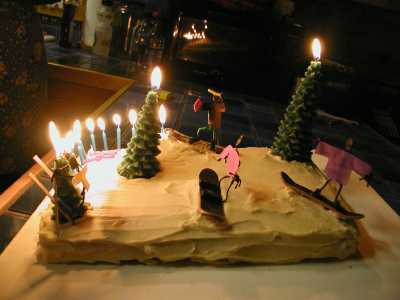 The tree after it has been trimmed and the
famous cake depicting a typical scene at Lutsen Mountains Ski
Area.

12/4/03 – – This is supposed to be our “quiet��? time of
year, but with two teenagers in the house, and the holiday season
upon us, it seems we never sit down. We did get the phones
working again, thanks to our dedicated technician, Steve Schuh.
Hopefully, they will stay fixed for awhile.

We started cross country skiing here at Sawbill on Sunday,
November 30th. That is a little later than usual, but
with the winters we have these days, we are grateful to be skiing
at all. The trails in the woods don’t have quite enough snow to
ski on yet (~10��?), but the unplowed campground roads are
groomed to perfection. The lake formed a fair amount of slush
after the heavy snow landed on relatively thin ice. The slush, in
turn, froze during the last couple of cold nights, so travel on
the lakes is pretty good right now. – Bill