12/28/07 – Tom (Hawk) Jensen sent this old photo the other day. Hawk was on the Sawbill crew in the early 70s and camped on the campground with his family for many years before that. He has continued to canoe in or near the BWCA Wilderness since he worked here, first with his kids and now with his grandkids. Thanks Hawk! – Bill 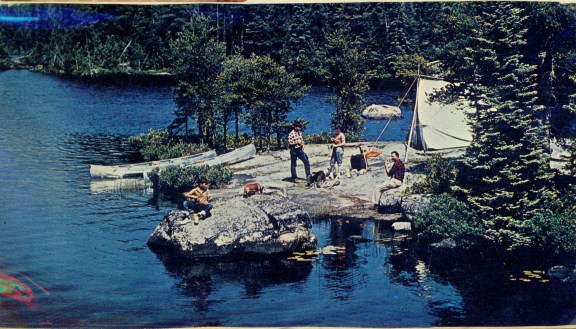 From left to right (according to my best memory): Bill Hansen at age 12, the dachshund is Liebchen – an early Sawbill dog, Karl Hansen at age 17, Mary Alice Hansen, Frank Hansen smoking a pipe(!). The year is probably 1965. The campsite is on north Sawbill Lake and is called “picnic rock”. At the time, it was a popular campsite, but was closed because there was no place to dig an adequate privy. It didn’t have a tent site either, which is why the old canvas tent is pitched with “poles”. It is still a popular picnic spot today. This picture was taken for a long defunct magazine called “Voyageur”. This particular shot was sold to the State of Minnesota tourism agency and was used in many publications.