2/26/08 – Lots of Sawbill news to catch up with. We enjoyed big group of visitors over the President’s Day weekend. The Sawbill Babes, an informal gathering of former and current crew members, held their annual skiing, wine drinking and laughing festival. 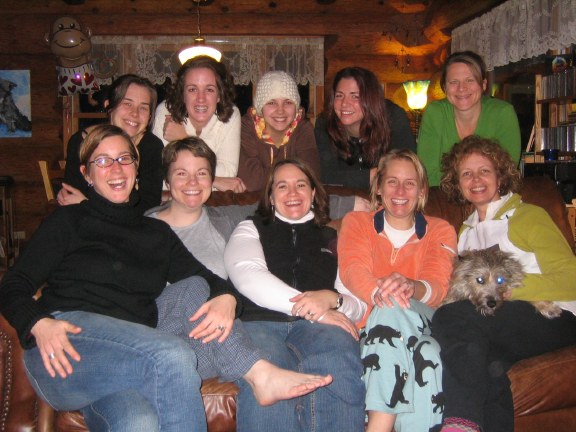 (l-r front row)Annie, Patti, Michele, Sandy, Phoebe (what a dog!), Cindy (l-r back row) Jessa, Caitlin, Clare, Lida, Beth.
Aside the Babes, we had visits from a number of other former and current crew, of both the male and female persuasion. Many are snowboarders and a couple of downhill skiers, so we enjoyed a big day at the Lutsen Mountains ski area. 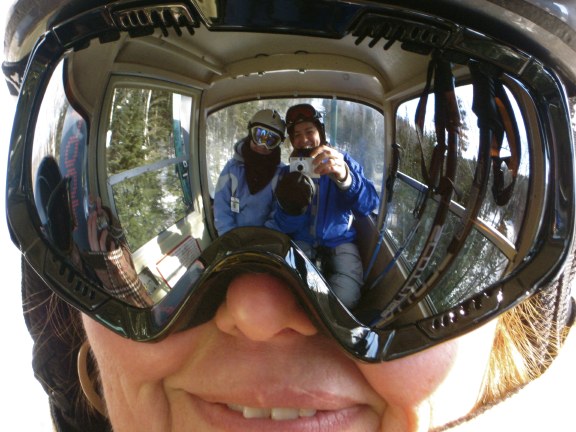 Clare and Lida reflected in Cindy’s goggles while riding the gondola at Lutsen Mountains.
Cindy’s appearance on the popular public radio show “Car Talk” didn’t happen. In Minnesota, the big public radio network was pledging, so they substituted some “Best of Car Talk” recordings instead of the regularly scheduled show. In the rest of the country, the episode aired, but we were disappointed that they didn’t use Cindy’s segment. They may use it in future shows, so keep your fingers crossed.
Sawbill native, Clare Hansen, has decamped to Vina Del Mar, Chile, for the next five months. She is attending school there toward her anthropology degree and cementing her fluency in spanish. Her blog is www.clarehansen.blogspot.com/.