10/11/08 – I met Harold Paulson and his first wife Norma while pausing for a golden tamarack photo shoot yesterday morning at the crossroads of the Sawbill Trail and The Grade (Forest Road 170). They had stopped to reminisce at the site of the old Sawbill CCC camp, which was just west of that intersection (maybe you’ve seen the commemorative sign there). 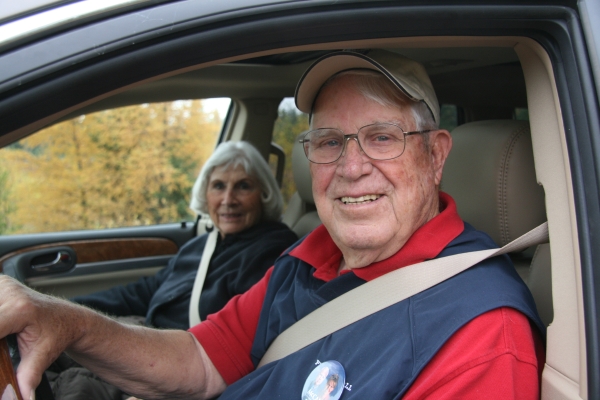 Harold and Norma Paulson of Northfield, MN.
Harold lived at the CCC camp while working for the Forest Service during the summers of 1946 and 1947, when he was a student at the University of Minnesota. He described that sleepy forest road as a community, complete with barracks buildings. His crew’s main job was to combat white pine blister rust and to clear space for logging roads, but his most vivid memory of his time working on the Sawbill Trail was the Plouff fire in ’47. He was the first person to report that fire, and it burned hot and fast: at one time during the week that it burned, there were three hundred people fighting it.
Harold remembered that his crew made good use of their occasional time off. He recalled driving down the railroad grade (now The Grade road) to Crescent Lake to fish with his buddies. No one else fished there, because there was no road access to it. He remembered one particular day when the group had five people and two canoes, and they drew straws to see who had to be the odd man out and stay on shore to fish. Out on the water, they heard a shout from the guy they’d left on shore – he had caught six four-pound walleyes on six consecutive casts! 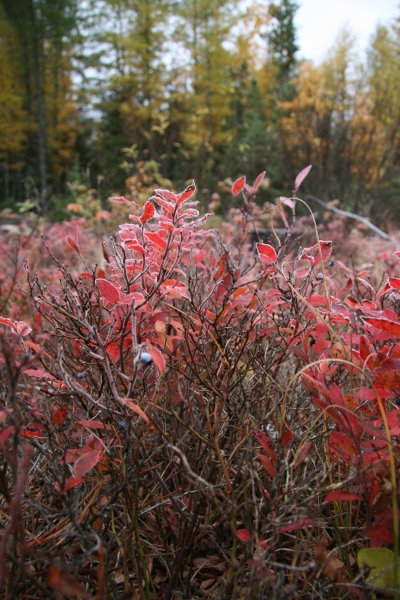 After Norma and Harold drove on, I paused to notice the delicate frost edging on the leaves of this brush. It took a while before I noticed that they are the fall incarnation of blueberries, with some berries still attached. – Molly.