2/7/11 – The bobcat story continues… Cindy had the great sighting of a bobcat with a squirrel in its mouth a few days ago (see story below). The next day we heard a loud thump outside the store. The dogs were already outside and the noise set them to barking. Suddenly their barks turned from routine “What’s that strange noise?” to frantic, high pitched “Oh my God, it’s time to panic.”
They headed around to the back of the store so I went out to investigate. Just as I stepped outside, the bobcat loped across the driveway about five feet in front of me with the two terriers in pursuit. The funny thing was that the big cat wasn’t really running and neither were the dogs. The dogs were game to give chase, but clearly didn’t want to catch a 25 pound wildcat. The bobcat headed under our house deck and Phoebe, our chief of outfitter security went under there too and barked at it for the rest of the afternoon and evening. She finally gave up and came inside when it got dark.
The next morning, there was a patch of frozen blood and a flying squirrel tail on the store deck in the same spot where the red squirrel had met it’s end the day before. Incidentally, flying squirrel tails are very interesting. They look like a large feather because the squirrels actually use them for steering while they are gliding around in the dark.
The next afternoon, Phoebe again started barking under the deck. We were going to town, so I put on coveralls and crawled under there to retrieve her. I was surprised to find that she and the bobcat were nose to nose with Phoebe barking and the bobcat growling. From time to time the bobcat would take a swing at Phoebe and she would yelp as if injured, but I don’t think it actually made contact. After dragging the excited terrier out from under the deck, I crawled back under and got these pictures. 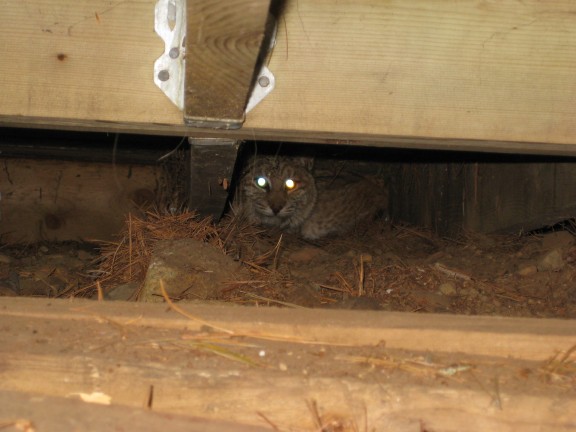 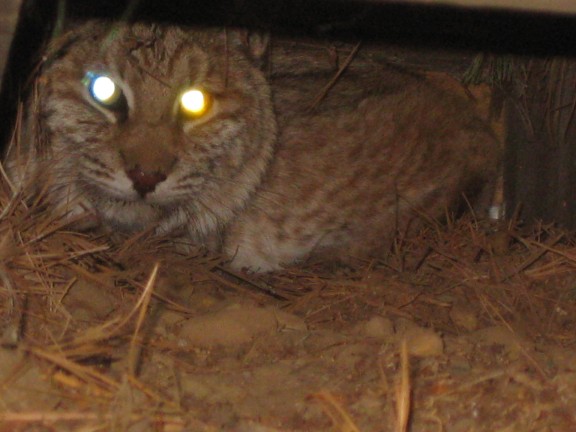 Later that evening, just as the Superbowl was starting, I flipped on the outside light and was very surprised to find the bobcat right at my feet with its nose pressed against the sliding glass door staring into the living room. After careful discussion, we decided that considering its strange behavior and the hours of barking and growling that we were bound to endure in the future, that we would set a live trap and move the bobcat to a new location. The trap was set, baited with sliced turkey, and we soon had a caged bobcat.

We quickly drove our bobcat friend to an undisclosed and distant location and released it back into the wild. We recorded the release on video and I will post a link to it soon. – Bill