2/12/11 – It’s raining bobcats! After our bobcat adventure last week, which culminated in our live trapping a bobcat that was living under our deck and posting the nerve wracking release on YouTube (scroll down if you want to view it), we got a lot of feedback, including postings on two popular blogs and Facebook. A couple of days later, our next door neighbors, who live 12 miles away, visited for some tea and skiing. As we were chatting at the dining room table, we glanced outside and were surprised to see a bobcat sitting on the ski trail about 100 feet from the house. With careful binocular examination, we determined that this was a different bobcat than the one we had previously released. 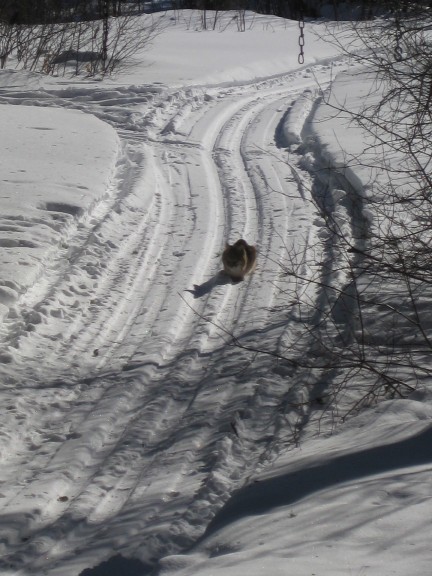 A non-telephoto shot of the cat. Different coloring and larger ears convinced us that this is a different bobcat.
Our neighbors shared that they also have a bobcat visiting their house and they’d heard about another home that had a bobcat under their deck. Also, after they left, they called to say that they saw a bobcat on the Sawbill Trail a few miles south of here. Since then, we’ve heard about yet another “bird feeder” bobcat in the county, so it seems as though the stress on the cats must be fairly universal and they are showing up everywhere.
Our latest visitor hasn’t holed up under the deck like the last one did. The dogs spotted it the next morning, but it just ran away instead of trying to hide. Last night, our terrier Phoebe, Chief of Outfitter Security, started barking wildly from her window perch. I went outside and found large bobcat tracks in the fresh snow right in front of the window.
We’ve decided not to trap this bobcat, as long as it doesn’t try to live under the deck. Hopefully, the coming warm weather will cause the snow to crust over enough so the bobcats can return to their normal haunts. – bill