3/28/00 – OB reports the ice to be 10" thick on Sawbill
Lake. The upper 8" is honey combed and candle sticked. Only
the lower 2" is solid ice. OB ice skated on Crescent Lake
yesterday on his way to work. He reported the best skating conditions
since last Fall. That should be the last ice skating of the year,
but you never know… – Bill

3/27/00 – My old friend, Steve Krahn, sent word of an old Sawbill
Outfitters brochure
for sale on eBay. It will be interesting to see what it brings.
What does it say about us that our old stuff is now considered
"collectible?" – Bill

3/24/00 – It is raining hard here this morning. After a nearly
60 degree day yesterday, I am thinking the lake ice is no longer
safe for skiing (sigh). I am a bit more conservative about ice
conditions after I fell through, skis and all, two years ago.
I have no desire to repeat that near death experience.

Ruthie Hansen has been accepted for admission to the University
of Chicago. She now has an important, but pleasant choice ahead
of her.

even crows stay off

3/21/00 – Here is some happy news from the Sawbill crew. Patti
Olson, a multi-year crew member of recent years past, wrote yesterday
to let us know that she is engaged. Her proposal came on St. Patti’s
day. You have to love a guy who likes a pun. Congratulations Patti
and Chuck 🙂

Ruthie Hansen is enjoying the last half of her senior year
at the Minnesota Arts High School. She has been accepted by Kenyon
College in Ohio and Lewis and Clark College in Washington state.
She is waiting for word from several other institutions before
she makes up her mind. She will be full time at Sawbill again
this summer, after spending a good part of last summer in Israel.
– Bill 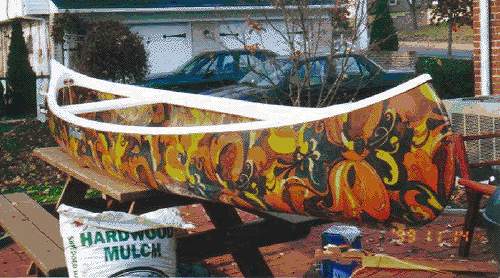 Jeff Reihle from Mt Vernon, Iowa sent us this unique
canoe picture. This was actually a stock Old Town model in the
70’s. I saw one on Kawishiwi Lake during that era. From a distance,
I thought it was a "Budweiser" canoe, which was another
classic of the era. Probably in better taste than the paisley.
– Bill

3/16/00 – Owlman Bill Lane is back in the area for his annual
survey of Boreal and Sawhet Owls. The return of winter weather
has slowed down owl breeding activity, but while it was still
warm, Bill reported hearing many owls. This is encouraging after
several years of declining owl activity. Bill does hypothesize
that the blow down areas will see a drastic decline in cavity
nesting bird populations. It may be that owls from that area are
moving into the territories located in the non-windblown portions
of the forest. After imitating the call that OB and I heard a
couple of weeks ago on south Alton, Bill informs me that we were
hearing a Sawhet Owl, not a Boreal. – Bill

3/10/00 – I heard a hawk whistling today. It reminded me of
warm sunny wind, the kind of days that move the white pines, when
the hawks cruise above Sawbill so fast their calls seem to be
everywhere at once. Two bald eagles rolled like ribbons out of
some aspens today. They went straight down the road, bouncing
ascension, heads twisting, watching my car under their bellies.
Glad to see them again. We are earning sunlight, up to 11.5 hours
today. As the days lengthen, so too does the fun at the end of
the day. I am off to explore Crescent Lake on my new ice skates
(they attach to my cross country ski boots!) Evening exercise
without headlamps strikes the most significant blow to winter.
My psychology slips toward Spring. OB

3/8/00 – Yesterday, we skied up Sawbill, down to the south
end of Alton, over to Beth and back to Sawbill in under two hours.
Several of us wore running shorts only and were perfectly comfortable
in the nearly 70 degree heat. Unfortunately, the digital camera
failed, so it will have to live in our memory as another northwoods
peak experience.

Today, we are having a thunder storm (unheard of in early March)
and 4 – 8" of snow are predicted tonight and a low temperature
near 0 degrees tomorrow night. Never dull. – Bill

3/4/00 – It was another perfect day for skiing on the lake.
I visited the little pond directly north of Sawbill Lake. On the
frozen surface were the tracks of a large wolf. The track were
quite old, but distinct. This is a phenomenon of the melting lake
ice. Every track deposited during the winter re-emerges as the
snow cover melts and evaporates. The denser snow created by the
tracks deteriorates more slowly, causing every track from the
winter to emerge like invisible ink heated with a candle. As I
pondered the wolf tracks heading north, a southbound jet passed
high overhead leaving a brilliant white contrail against the deep
blue sky. Both of the tracks were dramatic records of a passing,
both of the track makers were unaware of me, and both were ethereal
– passing quickly into oblivion. With these thoughts on my mind,
I turned and confronted my own tracks on the ice, looking like
giant bird tracks.

We were visited over the weekend by former crew members Ellen
Lock, Annie Strupeck, Michele Thieman, and Sandy Zinn. What was
planned as a "women’s ski weekend" became the "women’s
hiking weekend" due to record high temperatures. Ellen is
getting married in May, so we had a wedding shower Sawbill Style
on Saturday night. Even Frank got in on the fun and games. – Bill 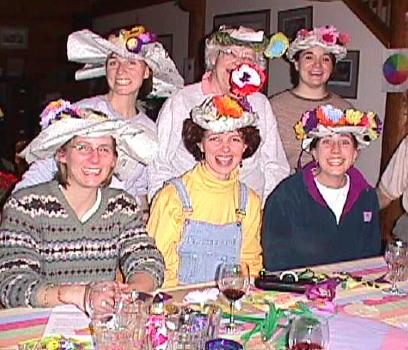 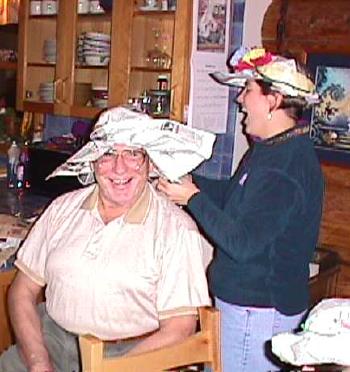 3/3/00 – We had a recreational triple header on the frozen
lakes today. 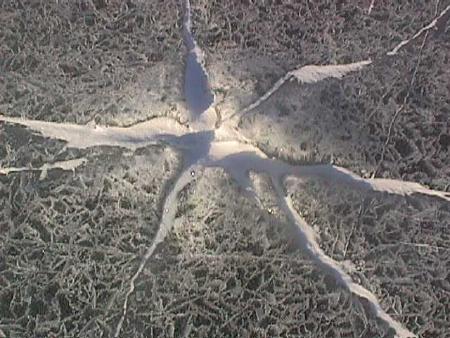 OB and I met at 8 A. M. for ice skating on Crescent Lake. The
surprisingly smooth ice allowed us to range freely across Crescent
and even up the river to Boulder Lake. It was hard to leave because
we knew that this might be the last chance for ice skating this
season. Crazy cracks made beautiful abstract patterns in the ice
interrupted by lovely symmetrical formations resulting from repeated
freeze and thaw.

Later in the afternoon, Sawbill Lake’s surface had softened
slightly, allowing a ski edge to bite perfectly for ski skating.
The wet surface made the glide nearly frictionless and twenty
kilometers passed under my skis in one hour and twenty minutes.
We drilled a hole and measured 19.5" of ice.

After dark, OB and I ventured out again. Now the surface had
refrozen so our ski skittered when we tried to skate. We soon
discovered that double poling was nearly effortless and found
ourselves on the south end of Alton Lake in no time. As we stood
quietly for a moment a Boreal Owl began its mating call in the
woods near by. It is unbelievably early for these plucky little
owls to be thinking of romance. – Bill

3/2/00 – I ice-skated on Lichen Lake this morning. Unusual
activity this time of year. The warm weather and rain has resurfaced
the lakes on the Grade Road, many of which look good for skating.
I plan to try Crescent Lake tomorrow. This is not the black ice
of Fall. It is whitish opaque to dark gray and surprisingly smooth
considering all the meteorological variables it was born out of.
There were many patterns on the ice. Large sections were paved
in small jigsaw size pieces, like skating on an exotic inlaid
courtyard. Other areas were covered in cinder block size tiles.
They were slightly arced, like the brickwork strokes in a Van
Gogh sky. All the cracks in these sections were just below a veneer
of ice, perfect for skating. Rocks are hatching through the ice,
providing dry mid-lake seats for soaking in the morning sun. The
ice was shifting and heating this morning, sounding like a pod
of whales whistling and singing below. I hardly heard another
sound, just a couple of woodpeckers. It was a great way to start
the day and a dandy elixir to chase away the melted snow blues.
OB

3/1/00 – Ken Harmon, excellent wilderness photographer, sent
us this picture of snowshoeing near the Gunflint Trail around
the middle of February. Less than two weeks later, I took the
picture below it of the slush and dark ice on Sawbill Lake. Several
days of 55 degree weather have had a dramatic impact on the snow
and ice. – Bill 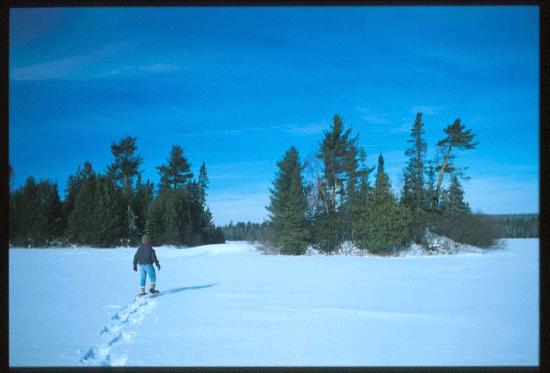 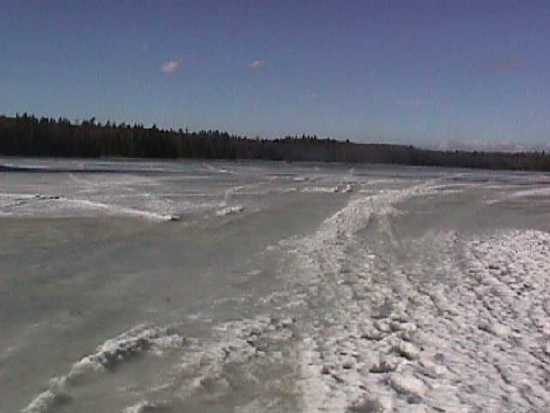