4/29/00 – Despite a brisk snowfall yesterday afternoon, several
parties have taken advantage of the early Spring and are out canoeing.
Lloyd Geving, a Sawbill camper since birth, wrote that he and
his son Carl were getting equipment ready for an early season
trip last week. Carl asked about the possibility of taking their
new puppy along. Lloyd said that it would be OK and moments later
snapped this picture. 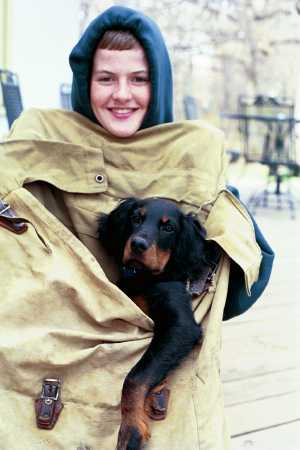 4/25/00 – Yesterday was a symphony of seasonal firsts. Clare
spotted the first chipmunk of the season. it is the "tame
one from the campground" and took sunflower seeds from her
hand. Cindy saw several grouse on the road in their mating display
– necks ruffed up, tails fanned, strutting like high school boys
at the prom. The aspen trees around Sawbill suddenly sprouted
catkins and the buds are swelling on the hazel brush. The first
mosquitoes made their appearance. It is a species that always
appears early. they are larger than the average Minnesota summer
variety, but are fortunately quite sluggish. The woodcocks were
executing their dramatic twilight mating flights. They shoot out
of clearings and rise straight into the air to dizzying heights.
Their wings make a distinctive musical sound. They spiral down
to land in almost the exact same spot they departed from, take
a breather, and repeat the process. The last sign of Spring was
the appearance of the Hansen family’s badminton net. Clare proceeded
to trounce me in the inaugural game. – Bill

4/24/00 – Cindy, Carl and I went for a bike ride yesterday.
We rode on a little used logging road about seven miles from Sawbill.
Along the way, the road skirted a large pond. Carl and Cindy rode
a bit ahead when I slowed down to gaze at the beautiful blue water.
My eye caught a flash of grey on the far side of the pond. As
I watched in amazement, a big, beautiful wolf emerged from the
underbrush. Carl and Cindy hurried back and we were able to watch
the silver-grey wolf for about 30 seconds as he worked his way
along the edge of the pond. We are so lucky to live in this wonderful
part of the world. – Bill

4/21/00 – Ruthie Hansen, Annie Olson, and Danielle Trego just
returned from a sunset paddle and report that Alton Lake is still
frozen over. The three young ladies are visiting for Easter vacation
from their schools in the Twin Cities. – Bill

4/20/00 – We received a report last night that all the lakes
along the Gunflint Trail are still ice covered. There was a party
canoeing out of Sawbill last weekend, but they came and went without
comment, so we don’t know what they found (except 4" of new
snow). I suspect that the larger lakes are still iced in, but
they should go out in the next few days. – Bill

4/13/00 – The ice is officially out on Sawbill Lake as of yesterday,
April 12th, a full six days ahead of the previous recorded record
for early ice out. The pictures below tell the tale. At noon yesterday,
we drove to the end of the campground and encountered quite a
large sheet of pretty solid ice. OB even walked on it. After supper
I went for a paddle and the large sheet of ice had decreased by
about a quarter, eaten away by the wave effect from a brisk southerly
wind. I worked my way around the ice and when I got through the
narrows that mark the boundary of the wilderness I was stunned
to see the rest of Sawbill Lake completely ice free. The official
rule is that the lake is out when it is more than 90% ice free.
Don’t rush up for a canoe trip right away though. The bay containing
the portage to Alton is still frozen and I’m sure any other bays
and lakes as well. We got two inches of snow last night, but as
soon as it warms up again, the remaining ice should disappear fast.
– Bill

While on my paddle I saw green head mallards, golden eye ducks,
black mallards, and bufflehead ducks. I also rammed an ice berg
that was completely awash and almost undetectable in the water.
The little solo canoe rocked just enough to remind me that the
water is 32.1 degrees and I needed to pay a little more attention.
It felt great to be paddling again. – Bill 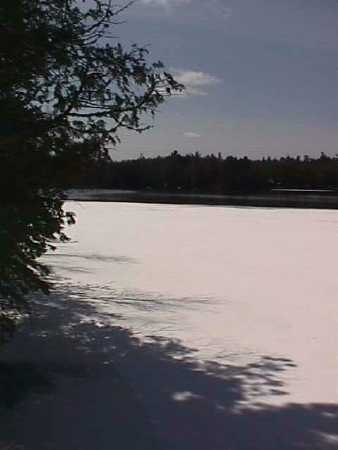 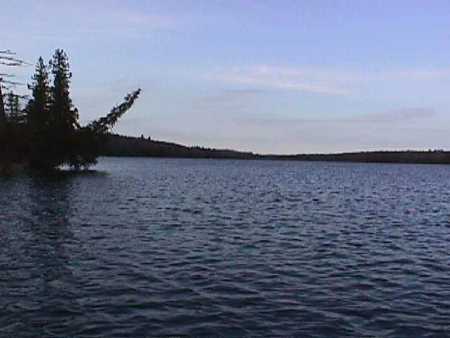 4/5/00 – We got 4" of snow the night before last and temperatures
in the teens last night. This will slow down the early Spring,
but probably not by much. The south end of Sawbill Lake is about
one half ice free. – Bill

4/4/00 – The Forest Service has released the following advice
for the ’00 season.

KEY MESSAGES FOR VISITORS TO THE BWCAW


The windstorm that swept parts of the Boundary Waters Canoe
Area Wilderness on July 4, 1999, blew down trees over a 350,000-acre
area. This storm has changed that area of the wilderness for years
to come, and has created the opportunity for new experiences and
new risks for BWCAW visitors.

HELP TO REDUCE THE RISKS OF FIRE IN THE BWCAW

Choose a camp stove instead of a campfire. If a campfire is allowed
and there is little or no wind, build it in the fire grate and
keep it small. Keep flammable materials and firewood far away.
Drown the fire with water until all embers, rocks and sticks are
wet. Stir the remains, add more water until the fire is extinguished
and cool to the touch. Do not bury coals as they can smolder and
break into flames much later. Be sure the campfire is completely
extinguished before you leave, even if for a short time!

There may be hazards due to downed and weakened trees and trees
may continue to fall. Stay alert and heads up, fallen or leaning
trees may snap back unexpectedly when cut. Avoid camping and walking
under damaged and leaning trees. Root wads above the ground may
also be unstable and dangerous.

There may be fire restrictions in all or part of the BWCAW. These
are for your safety and to reduce the threat of large, dangerous
wildfires. Before entering the wilderness, please check on fire
restrictions. Contact any Superior National Forest District Office
or forest headquarters, (218)626-4300, or check the Superior
National Forest website for specific information and maps.

There is a significant increase in the likelihood of fires in
the blowdown area as a result of the storm. Wilderness visitors
can expect: wildfires that start and spread, even in wet conditions.
Wildfires that burn more intensely and may spread rapidly. Wildfires
that easily jump barriers such as small lakes and streams. Increased
risk of being trapped by a wildfire with difficult escape routes.

IF YOU SEE OR SMELL SMOKE, DON’T PANIC

The fire may be miles from you and pose no threat to your safety.
If the fire is nearby or moving in your direction, travel away
from it at a right angle, if possible. That means going south
or north if the fire is approaching from the west. While you travel,
try to stay close to a large body of water until the fire passes.
In extreme cases, paddle to the middle of a lake, wear your life
vest and submerge yourself under your overturned canoe, where
you can breathe the cool, trapped air to protect your lungs and
airways until the fire passes.

AS YOU TRAVEL IN THE BWCAW:

Wind: Most fires travel east and north. Make sure you have a safe
route to follow in case wind direction changes. Embers can blow
more than a mile, possibly starting new fires. As humidity increases
in the early morning and late evening, fire activity may decrease.
Travel may be safer at these times. Tall smoke plumes indicate
a very hot fire. If you see a tall smoke plume upwind of you,
seek a point of refuge, such as a lake.

Look at maps, alternative routes and your proximity to a large
body of water. Stay close to water. If there is a safe way around
the fire, with broad expanses of water, consider traveling from
the area. If you must travel through burned areas, watch for burning
stump holes and hot embers. Burned trees can fall easily.

If you feel threatened, get on a large lake. Stay upwind, but
be aware that large fires can burn unpredictably in any direction.
If the fire is upon you, take your canoe into the water. Put on
your life jacket, paddle to the middle of a lake, tip over your
canoe and go under it. You can breathe the cool, trapped air under
the canoe until the fire passes.

4/3/00 – Two ravens sit on the swing set and ponder the temporary
return of winter today. We saw our first grackle today – a reliable
sign that the snow is not long for this world. The lake is too
shaky to even measure the ice. I would guess that it is only
about 6" thick and quite degraded. I’m thinking the ice will
be out by the weekend or shortly thereafter.

This small brown bat was discovered snuggled up in our back
door frame this weekend. Although it seemed to be sick or injured,
perhaps it was just sleepy, as it disappeared shortly after dark.
– Bill