5/29/00 – Whew! The busy Memorial Day weekend has passed. Paul
Lundgren, a former Sawbill crew member, and his friend Cindy came
to help us out. I would like to thank all the other former crew
members who have pitched in to help us this spring: Steve Surbaugh,
Kate Surbaugh, Natasha Warner, Jason Morse, Karl Hansen, and Lee
Stewart. Special thanks to Kathleen Heikes, who is not a former
crew member, but also helped out immensely during the start up
season. It is great fun for us to have these fine friends come,
visit and work along side us for awhile.

Many canoeists reported seeing moose this weekend. The babies
are all born now and the mothers keep them near water for the
first few weeks of their lives. Several sets of twins were spotted.
– Bill

5/25/00 – Memorial Day weekend had begun with a noticeable pick-up
of the pace here at Sawbill. Five of our summer crew members have
arrived from the early adjourning colleges. It is a huge relief
to have the extra hands at this busy time of year and great fun
to share the cheerful energy of these remarkable young men and
women.

Speaking of young people, we seem to have about half the population
of high school age kids from Rochester, Minnesota here at Sawbill.
Kids from all three high schools in the town famous for the Mayo
Clinic have taken canoe trips out of Sawbill in the last week.
They are a clear eyed and polite group with leaders that are clearly
respected teachers. They have battled black flies and high winds
this week, but their spirits remain high. – Bill

5/22/00 – Another round of significant rain is encouraging
the forest to don its coat of summer green. The leaves are about
halfway out now. Woods anemone are blooming and the broad leaf
aster are starting to appear. Violets and bunchberry can’t be
far behind. Unfortunately, the black flies have also made an early
appearance. These small, but voracious, gnat like creatures are
known as "the flying mouth of the north." They have
not been too plentiful so far, thanks to the cold weather and
brisk winds. They should peak during the Memorial Day weekend
when human blood is at its most plentiful. Normally, the black
flies are only around for a few weeks. We are hoping they will
disappear on the same early schedule they arrived on. Head nets
and a judicious application of repellent are highly recommended
for the next couple of weeks.

Open fires continue to be banned in roughly half of the BWCA
Wilderness. In our area, Alton and Sawbill Lakes are in the ban
area. West and north of Alton up to Mora Lake, fires are allowed.
East of Alton, fires are banned. The local Forest Service office
tells me that the ban is likely to continue until the end of June,
irregardless of the weather. The Forest Service has amassed an
incredible arsenal of fire fighting weapons, including the amazing
Sky Crane helicopter, capable of dropping 2,400 gallons of water
at a time. 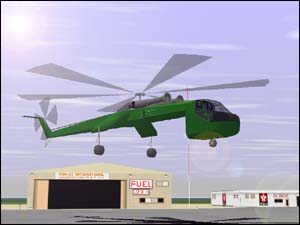 5/17/00 – We received this email today from Ed Dallas, the
poet laureate of Sawbill:

Well I’m back from the flagging trip on the Kek Trail. We flagged
from

Bingshick to Seahorse plus another 1/2 mile. It is a mess out
there! In a

path. We canoed in on last Friday from Round Lake and camped on
Bat Lake,

just off Gillis Lake. It snowed off and on on Saturday and Sunday,
which

was great as it kept the blackflies at bay. On Sunday it coated
the ground

for awhile. On Monday it got warm and the blackflies came out
in force!!

Tried to eat us alive!!! The trip was great as we got our job
done and also

hate to bring this up ) a camp marten. Saw him each night in camp.
I think

sure about the T-shirt. We did catch some trout and had one mighty
fine fish

boil for supper on Saturday night. I bet you guys are working
hard now, hope

you find time to get out in the canoe. Say "hi" to the
kids and Cindy for

me. I guess the "office move" back to the store went
well. Maybe I can help

with the move come fall. I leave you with this haiku:

Have a good one,

5/14/00 – Dr. Steve DeVries is a professor at Cornell College
in Mount Vernon, Iowa. Every year, Steve, along with co-leader
Jeff Reihle, brings a group of college students on a canoe trip
through Sawbill as part of a class. In the last fifteen years
or so, they have endured almost unrelenting bad weather. In spite
of this dampened reputation, Steve remains relentlessly positive,
enjoying every moment of his time in the wilderness.

This year, the forecast looked hopeful. A chance of showers
on the first day and partly sunny for the four days following.
On Thursday, it started to rain hard about fifteen minutes before
they arrived, but the forecast called for improvement. "That’ll
change." said Steve, without rancor. Friday, in all honesty,
wasn’t too bad – warm with just some fog and a few light showers.
Saturday – snow started to fall early and continued off and on
all day in the teeth of a 25 mph northwest wind. Still, the forecast
called for improvement.

Today, we woke up to this: 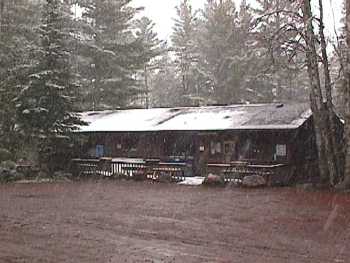 Steve is due to end his trip tomorrow. The forecast is for
clearing and warmer this afternoon, but I’m not planning to take
the long johns off until the Cornell group starts back to Iowa.
– Bill

5/12/00 – Yesterday was John Oberholtzer’s last day of work
at Sawbill. "OB" has worked about fifteen years, off
and on, here at Sawbill. Those of you who don’t know him in person
will recognize his name from this newsletter where his beautiful
writing has been featured for several years.

As a send off, Cindy designed a timed course of common Sawbill
jobs. In order of their appearance below, the picture are: 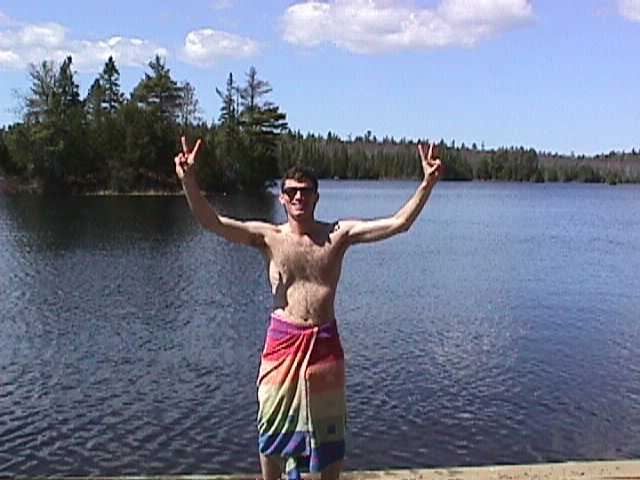 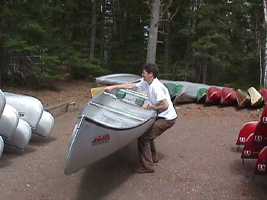 packing a cookkit for 8 people, putting canoes back on the
rack, 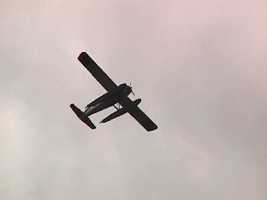 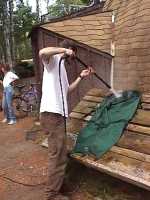 (the Forest Service airplane observes from above), washing
a pack, 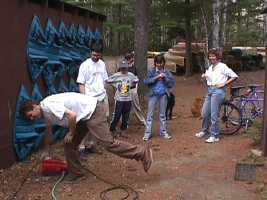 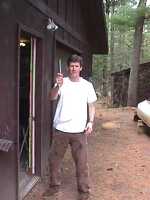 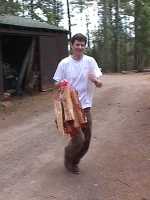 turning off the high pressure washer, locating the wing nut
wrench in the workshop (and putting it in his pocket so no one
else can find it), stocking the firewood, 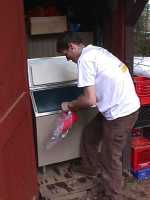 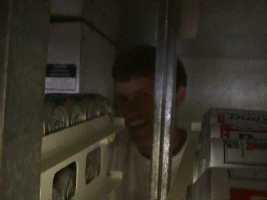 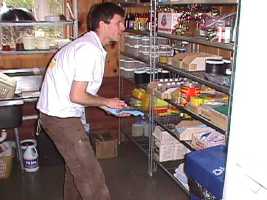 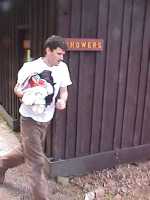 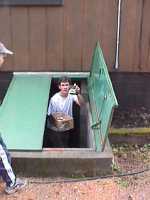 preparing a dishwashing kit, fetching the towels from the men’s
shower room to the laundry, finding a jar of beets in Frank and
Mary Alice’s cold room, 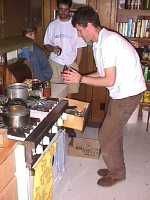 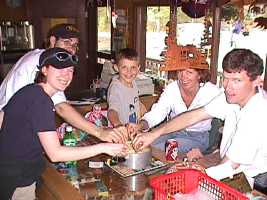 We were tempted to give OB a gold watch, but decided a Peter
Puddicombe paddle was more appropriate. His smiling face, capable
hands, and empathetic heart will be deeply missed by crew and
visitors alike. I hope he will contribute the occasional piece
of writing to this newsletter. He will stay in the area and is
planning to expand his passion for writing and wilderness travel
. – Bill

5/5/00 – The US Forest Service announced on May 3rd tighter
restrictions on campfire use in the BWCA Wilderness. The restrictions
come amid a sustained period of very dry conditions across northeastern
Minnesota .

The USFS has upgraded the fire danger index in the BWCA Wilderness
from a "low" to a "moderate" danger rating.
This is due to a lack of soaking spring rains and low snowfall
during the past winter.

Campfires will be prohibited in the areas affected by last
summer’s blowdown, where over 350,000 acres of forest was affected
by high winds. This includes all camp and cooking fires. The fire
ban in the affected area will likely be in effect at least until
June, when early summer rains usually soak the area and reduce
fire risk. at: A
map of the area covered by the campfire ban is available on
the Superior National Forest website. The
Minnesota Department of Natural Resources also has a helpful web
site that contains fire related information for the entire
state of Minnesota, including the BWCA Wilderness.

There are currently no restrictions on the use of campfires
in areas not affected by the blowdown; however, as always, caution
is encouraged.

5/2/00 – More crew news: We had a visit overnight from Jeff
Thompson, former Sawbill crew member and charter member of the
Sawbill Frisbee Golf Association. Jeff is a talented newspaper
photographer. He has been working for a chain of northern Minnesota
and Wisconsin newspapers based in Duluth, but has just been hired
by the Mankato Free Press in Mankato, Minnesota. He stopped by
for a quick northwoods fix before moving his life’s possessions
to farm country. Jeff hopes to relocate to northern Minnesota
eventually.

5/1/00 – Sawbill crew member Ruthie Hansen has chosen the University
of Chicago as her venue of under graduate study. Congratulations
Ruthie.