6/26/00 – Ruthie and I just returned from a quick three day
canoe trip in the Parent River/Isabella River area. We practically
had to push wildlife out of our way. Eagles, hawks, golden eye
ducks, and egg-laying western painted turtles everywhere. On Boga
Lake our campsite was a major nesting area for the local turtles.
At any moment the campsite was ringed by half a dozen turtles
waiting to crawl up and lay their eggs in the soft, warm soil.
During dinner, one particularly desperate turtle came climbing
up the bank and crawled directly toward us. Ruthie picked up a
twig and brandished it in mock defense. The turtle stopped three
feet in front of us and carefully looked at each of us in turn.
She patiently worked her way over the rough terrain, skirting
our position, and started to dig a hole for her eggs. She was
contentedly laying them when we turned in for the night.

There is a canoe trip of ex-Sawbill crew members departing
this morning. Mike MacMillan and his wife Leigh, Will Decker,
Sandy Zinn, John "OB" Oberholtzer, and Kathleen Heikes
will be canoeing for the next few days. We are trying to press
them into temporary employment while they’re here, but they are
carefully avoiding our enticements.

We’ve had a lot of rain in the last week, dropping the fire
danger and raising the water levels.

6/19/00 – Sawbill crew member, Dave Freeman, went for a paddle
last night and took these snapshots on the south end of Sawbill
Lake. 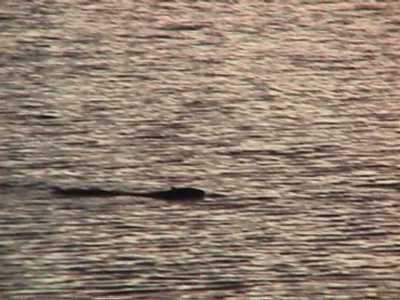 A beaver goes about his business. 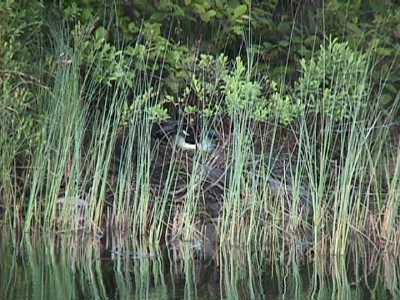 We got a wonderful letter from long time customer and friend
Jim Nelson today:

First, I found my sunglasses in my fanny pack, which I carried
with me over the Memorial Weekend, but never opened all the way.
Dumb!

Second, I wanted to thank you for your part in helping Scott,
my three grandsons and myself have a great time. I know you didn’t
have anything to do with the weather, but it was pretty good.
For each of the three grandsons, Zach and Colin (the 7-year-olds)
and Jacob, the 11-year-old), catching their fish was by far the
highlight. You should have seen the smiles on their faces when
we reached Des Moines. (As I think of it, Scott & I had Cheshire
grins as well.)

That was for me, and I believe for Scott as well, a perfect
opportunity to introduce those three young boys to the lore of
the north land with its unique and bountiful history. One of the
seven-year-olds, Zach, mentioned that the BWCAW was his idea of
paradise. (Not that he was coached, or anything — his two uncles,
mother and grandpa would NEVER influence such a delicate mind!)
He said that, however, last winter before he had ever been there.Of
course, I think he was right, and I believe he confirmed it for
himself in those four days.

They were each entranced with the place, from the soaring eagles,
to the primordial language of the loon, to the glassy gift of
a peaceful lake getting ready for the night’s rest as it reflects
a golden sunset full of the promise of a beautiful tomorrow. 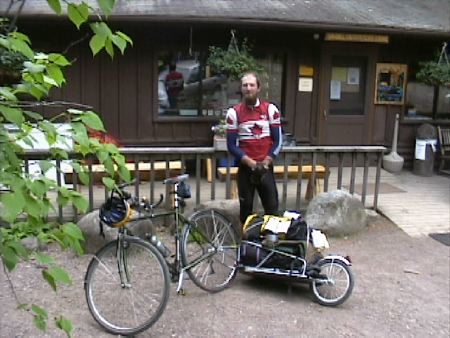 Scott Hall rode his bike and trailer combination up
to Sawbill from Minneapolis last week. He left his bike with us
and took a five day solo canoe trip, then rode back to Duluth
to meet and friend and continue his vacation in Bayfield, Wisconsin.

6/11/00 – We’ve been entertained the last few days watching
people get out of there cars after driving up from the south.
Everywhere south of Duluth has been baking in 90+ degree heat.
The high temperature along the North Shore yesterday was about
45. Here at Sawbill, folks stepped out of their cars into the
chilled air and were instantly sporting goose bumps the size of
actual geese. They dove back into their cars in search of long
pants and down vests.

Sawbill crew members Annie Olson and Ruthie Hansen recently
finished a 48 hour Wilderness First Responder certification course
at the Wolf Ridge Environmental Learning Center. The course, taught
by B.J. Kolstadt, prepares Annie and Ruthie to respond to emergencies
requiring first aid within the wilderness. It is comforting for
us to have trained First Responders on our staff.

6/9/00 – Summer is fully arrived at Sawbill. The black flies
are nearly a bad memory as friendly dragon flies replace them.
The no-see-ums arrived with a vengeance last evening, due to the
balmy temperatures and low winds. These tiny pests only affect
a minority of people. Some people think they are literally a joke,
but those of us who endure the itching, burning welts are not
laughing. The unpleasant sensation only lasts for about 20 minutes
and they do respond to repellents, so they aren’t too bad.

The leaves are fully out now. The blossoming bushes are done
and the bunch berry and strawberries are taking over.

The male members of the Sawbill crew spent the night in the
wilderness recently. The object of their trip was to terrorize
the lake trout on a certain lake. They returned with many stories
of fabulous fishing and three actual fish. The three lake trout,
yielding their dense, rich meat, fed ten people with plenty of
leftovers.

Cindy and I missed the fish dinner because we were guests at
a gourmet dinner at Papa Charlie’s restaurant at the Lutsen Mountains
ski area. They have recently hired two wonderful new chefs and
the dinner was offered to local business owners to introduce their
talents. They are using many local ingredients (lake trout, wild
rice, maple syrup and wild mushrooms, among others) to create
truly delicious food. Life is hard here in the north country.
– Bill

5/29/00 – Whew! The busy Memorial Day weekend has passed. Paul
Lundgren, a former Sawbill crew member, and his friend Cindy came
to help us out. I would like to thank all the other former crew
members who have pitched in to help us this spring: Steve Surbaugh,
Kate Surbaugh, Natasha Warner, Jason Morse, Karl Hansen, and Lee
Stewart. Special thanks to Kathleen Heikes, who is not a former
crew member, but also helped out immensely during the start up
season. It is great fun for us to have these fine friends come,
visit and work along side us for awhile.

Many canoeists reported seeing moose this weekend. The babies
are all born now and the mothers keep them near water for the
first few weeks of their lives. Several sets of twins were spotted.
– Bill