11/30/01 – All of this beautiful snow has fallen
at Sawbill, but there’s not quite enough to ski on yet and the
lake isn’t solid enough for ice skating. However, after all our
work shoveling we decided we needed to have some fun in the snow
even if we couldn’t ski or skate. So we took a look around to see
what we could come up with. We didn’t have to look very far.
After a quick match of rock, paper, scissors to determine who
would drive, we were off (well, at least Beth was). 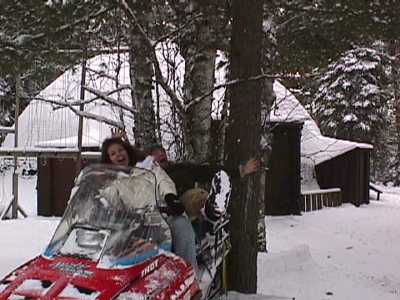 I walked outside last night around 10 o’clock and
was amazed at how bright it was. Since there are no lights
anywhere close, the nights here are usually so dark you have to
be careful not to walk into trees (or the occasional large
construction hole). But last night, with the fresh snow on the
ground, the branches of the evergreens still blanketed in white
and an almost full moon, it seemed like dawn had arrived far too
early. A light cloud cover seemed to diffuse and spread out the
moonlight. (The moon is full tonight – which will be a blue moon.
There was also a full moon on November 1st). I headed down to the
lake, hoping to catch a glimpse any animals that might be out for
the evening. Standing at the intersection of the Sawbill Trail
and the road down to the lake, I could clearly see the lake. Once
I got to the canoe landing, I had no trouble seeing the opposite
shore. It was tempting to test the ice to see how far out I could
get, but I knew it would quickly turn into a swim as the
temperature was near 30 degrees yesterday. I didn’t see any
animals last night, but maybe tonight as its sure to be just as
bright.

11/29/01 – Shortly after dark last night, Cindy
and Beth stumbled back into the house after their highly
anticipated plowing bet (See yesterday’s entry). Although at the
beginning it looked like it might be a neck and neck race, it
soon became clear who would be the winner. Cindy started right in
on the driveway while Beth struggled to get the truck door open.
Cindy was half done with the parking lot before Beth had even
started the truck. Cindy finished up by shoveling the new porch
on the store about the time Beth figured out how to make the plow
turn. In the end, Cindy finished shoveling out all of Sawbill in
approximately an hour and a half. She spent the rest of the time
helping Beth back the truck down the driveway. Thankfully, we
didn’t get any more snow today – Cindy’s arms are a bit tired. 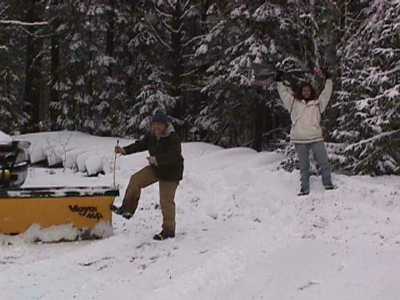 We’ve been showing you all of the changes that
have been happening at Sawbill during the construction. We
decided it was time to show you the people who have been working
so hard to make the new building take shape. Through rain, wind,
snow and cold they keep tearing down walls and putting up new
ones. 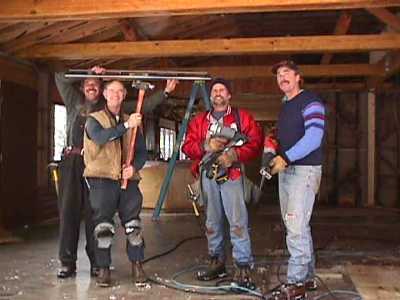 Grey, Steve, Don and Hans are rarely seen
without a power tool in hand.

11/28/01 – Winter has finally arrived at Sawbill.
A light snow has been falling steadily for the past two days, and
about 5" has accumulated on the ground. The lake also froze
last night. The ice is still very thin (about 1/4") but
there is almost no snow covering it so we’re hoping for some good
skating ice by the weekend. Frank reported that all of the lakes
along the Grade Road into Grand Marais were frozen this morning,
except for Crescent Lake. 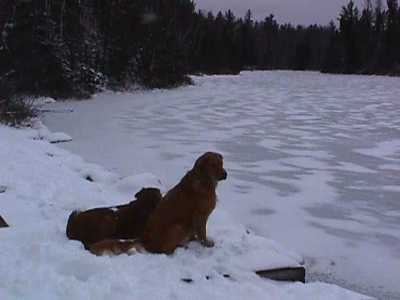 Homer and Sunnie can’t wait for the ice skating
to start.

The construction projects continues to make big
strides despite the winter weather. The final inside wall came
down this week and almost all of the outside walls are in place. 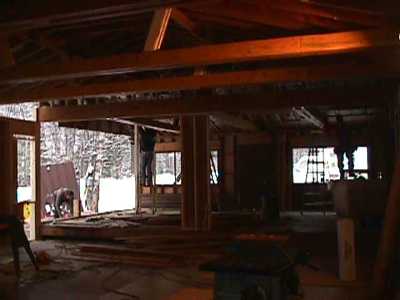 Inside the old building. The door in the
background is the old front door.

Since the snow is piling up, it means we have to
plow for the first time this winter. As Bill is out of town,
Cindy and Beth are in charge of snow removal. Although both are
experts with snow shovels, they fall into the novice category
when it comes to plowing with the pick-up. During the discussion
of plowing, a wager emerged as to which would be quicker, Cindy
using the shovel or Beth plowing with the truck for the first
time. They’ve been out there for hours and there’s no sign of
them yet. We’ll let you know how it turns out. 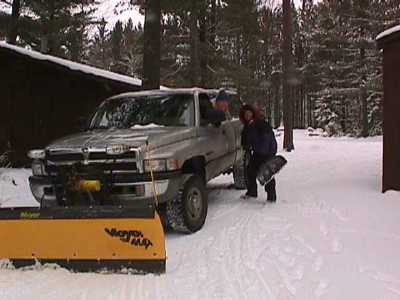 On your mark, get set…

11/16/01 – The carpenters have torn out almost
the entire west wall of the store building. The destruction part
of the project is almost over. 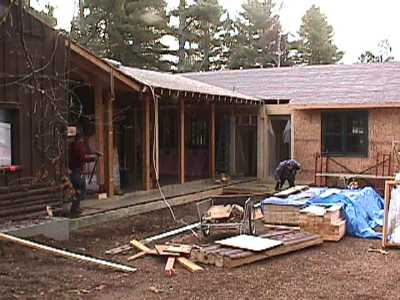 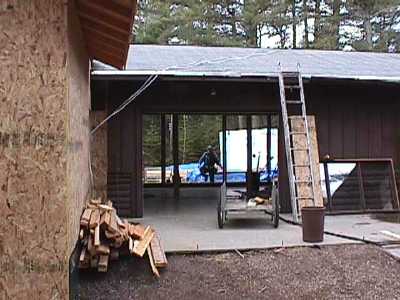 Two views of the Sawbill store building where
it attaches to the new building. Ventilation is excellent at the
moment.

Our resident Gray Jays are busy at the feeders.
We have two distinct tribes of jays that live near us. Clare
feeds them from her hand on a regular basis and in now able to
identify individuals. The family that visits most often has one
very friendly member, that readily sits on Clare’s hand and looks
at her with a cheerful eye. It has another member that will
reluctantly eat from her hand, but always is slightly suspicious.
The third is always shy and will only come within about eight
feet of Clare despite her best efforts to win its trust. Last
night the spring peepers were quietly calling. They were
obviously hopeful that winter is over and spring has arrived.
They are in for a rude shock soon. 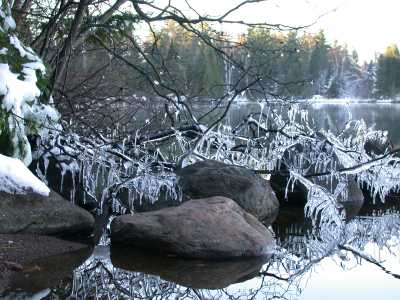 Rick Grupe took this beautiful picture more
than two weeks ago. The icicles are all gone now, but will return
soon