12/27/01 – Things have been very busy at Sawbill
over the past week. Christmas was celebrated in style with many
of the extended Hansen family present; Karl Hansen and Lee
Stewart were in attendance, as well as Sawbill crew member Emily
Stewart who is currently on winter break from college in
Washington DC. Ruthie Hansen came in from the University of
Chicago for the festivities and everyone joined Frank, MA, Bill,
Cindy, Clare and Carl in the traditional Hansen Christmas fun.

One of the best things about Christmas at Sawbill
is the magnetic effect on Sawbill friends and family near and
far. Former crew-member Pete Glaschagel and his wife stopped in
for a quick pre-Xmas visit, and just today we have been enjoying
catching up with Dave Freeman and Eric "Frosty" Frost
of BigMuddyAdventure.com fame, who are headed into the wilderness
for a week-long winter camping adventure. They were joined
spur-of-the-moment by current and former crew-members Laura
Smith, Jeff Green and Kelsey Grant-Jenkins. 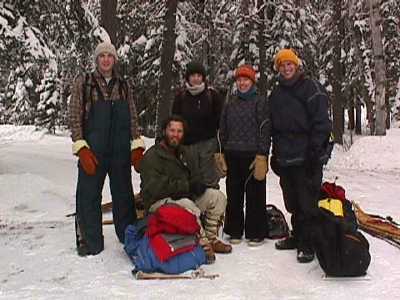 Work has resumed on the store construction project
after a short break for Christmas. Richard the architect and Don
and Grey the builders are all here and enjoying a warm
coffee-break and fresh-baked pumpkin bread as I write. Snow is
drifting down lightly outside, Clare and Carl are outside
sledding with Homer the dog. All is well at Sawbill. -Ruthie

12/19/01 – Part of the magic of "wild
ice" is that its existence is ephemeral. If you are going to
skate, you have to drop everything and go when the conditions are
favorable. Today four of us skated from Sawbill to the north end
of Cherokee Lake and back. It was snowing lightly most of the
day, but not enough to interfere with skate travel. I did get a
wet foot in the creek north of Ada Lake, but otherwise the ice
was a solid four inches or more everywhere. It took us six hours
for the entire trip, including several snack and conversation
breaks. We saw four sets of extremely fresh wolf tracks on
Sawbill Lake. Their presence was explained by the remains of a
deer right in the middle of the lake. Wolves use bare ice
conditions to their advantage by chasing deer onto the slippery
surface and killing them when they slip and fall down. All that
was left of the deer were a few large hunks of hide. – Bill 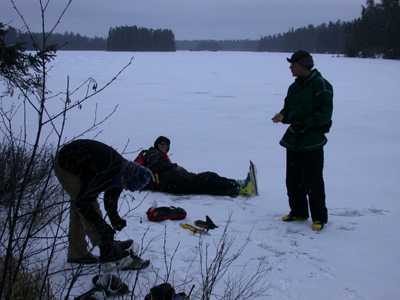 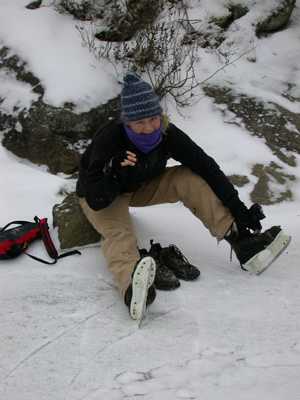 The skating voyageurs taker a break on the
north end of Sawbill Lake. Beth prepares to exchange skates for
boots at the start of a portage. 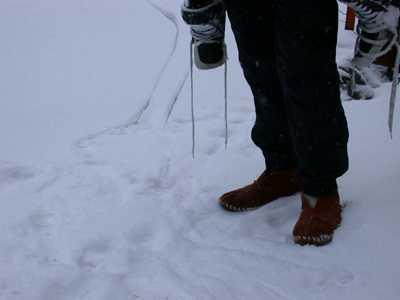 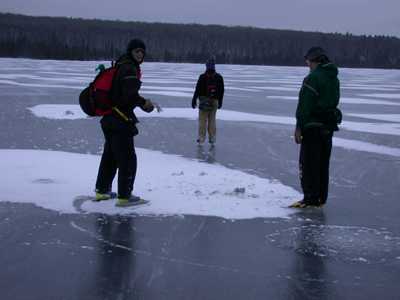 12/18/01 – The recent unseasonably warm weather
and rain have had a smoothing effect on the lake ice. OB calls it
a "giant meteorological Zamboni." Today’s cold snap
made ice skating the perfect activity. We made our way over to
Alton, where the ice was even smoother and spent a few happy
hours exploring, playing and admiring the unusual ice formations.
– Bill 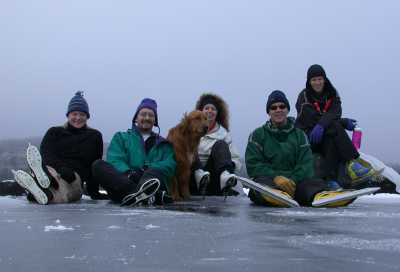 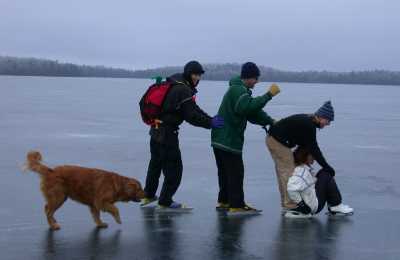 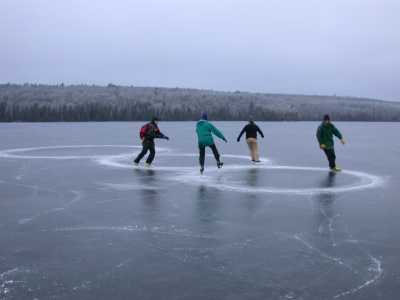 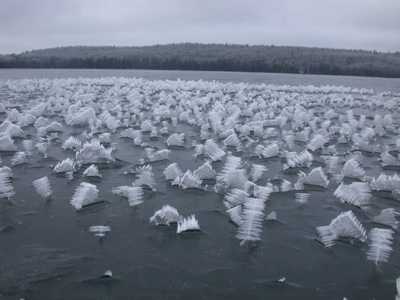 12/13/01 – Another Sawbill crew baby to report.
Mike and Leigh MacMillan are the parents of Cade Michael
MacMillan as of December 3rd. Cade was 8 lbs, 7 ozs and
20.5". Mike worked here for several years around the early
’90’s. 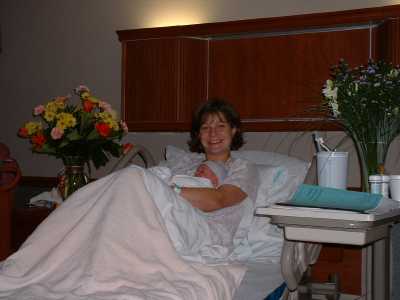 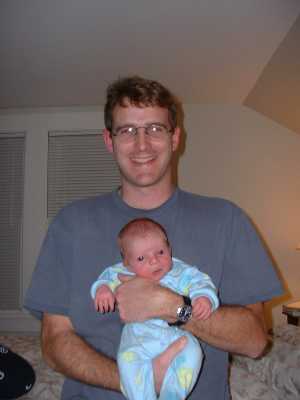 12/11/01 – This past weekend was filled with
activity. In addition to Carl’s birthday, it was also the weekend
to pick out a Christmas tree. This is a big event and many trees
are considered before The One is found. A beautiful 15′ balsam
fir was agreed upon. The tree was carefully loaded into the back
of the pickup, Homer and Sunnie were boosted into the back of the
cab, then Carl, Clare, Bill, Cindy, and Beth all squeezed in for
a very cozy ride home. – Beth 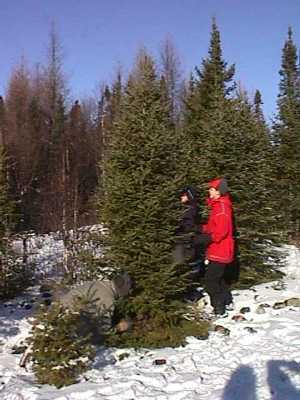 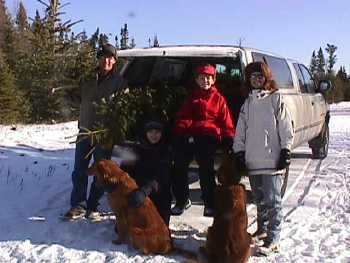 How about this one?…Maybe that one?….I like
the one over there. Everyone seems happy with the final decision.

Once we piled out of the truck and had refueled
on some birthday cake, it was time for the a little Snow Football
with the Hansen’s friends, Tim and Gus. This game was supposed to
take place over Thanksgiving weekend. However, as there was no
ice on the lake, it was postponed until this weekend. We got a
better workout from all the laughing than from the football
playing since the ice was so slippery with a light covering of
very powdery snow. It was basically impossible to change
directions once you were headed one way. If you did try to shift
directions, you were guaranteed to end up on the ice, sliding
whichever way you were originally aimed. Carl, the birthday boy,
had the play of the game when he ran a kick-off back to score a
touchdown with a wall of defenders surrounding him. Amazingly,
everyone made it through the game with no need for medical
attention. – Beth 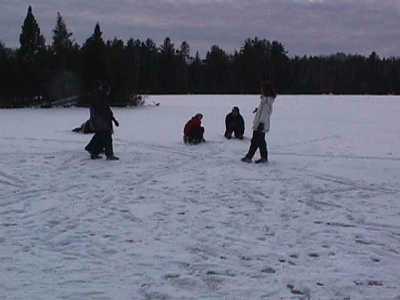 I’m trying to stay on my feet, honest.

The construction guys were wishing the sauna was
done after the work they did yesterday. They moved the huge logs
that are standing in front of the store in the picture below.
Each log is almost 10 feet tall, has a diameter of a foot and a
half, and weighs about 600 lbs. The guys moved and stood them up
by hand yesterday. The new roof connecting the old and new
sections of the building (which they just started and you can see
in the photo) will extend over the logs to create the roof over
the new front porch. The windows and new front door went in at
the end of last week. They look really sharp and the logs on the
porch are impressive. – Beth 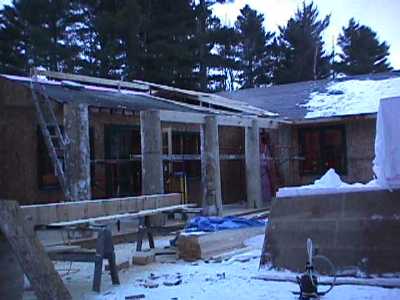 More than 2 tons of logs were moved into
position yesterday.

12/9/01 – Today was a very festive day at Sawbill
as it’s Carl’s 12th birthday! His day was filled with unwrapping
a pile of colorful presents, eating a huge piece of computer
shaped cake, and playing his new computer games. He seems to be
enjoying 12 a lot. 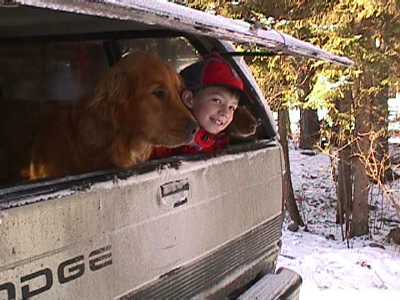 I have been trying to come up with a haiku for
the picture of all the cookies and I did today. I can only wonder
just how much baking goes on at Sawbill at this time of year, so
I offer you all this one:

after the New Year

12/05/01 – A huge cold front blew in last night
with some amazing winds. Cindy counted seven trees down on the
Sawbill Trail when she took the kids to school this morning. She
said one of them was the huge top of a spruce tree that had
landed in the middle of the road, but that section of the road is
surrounded by Alder trees. Who knows where it blew in from. The
temperature is about 20 degrees colder today than yesterday. I
walked down to the lake this afternoon and there is a gentleman
ice fishing about 20 feet off of the landing. He’d been there for
an hour and a half and hadn’t had a bite yet – he was still
optimistic though. He said the ice is about 3" thick, which
is good considering there was standing water covering it
yesterday from so much melting.

The construction crew finished ripping out the
old offices and the ceiling of the store. Right now they’re
insulating the new building and everything is bubble gum pink. It
kind of feels like stepping into Barbie’s Dreamhouse. They’ve
also finished the west wall on the old portion of the building.
In the upper right had corner of the picture you can see the
framework for the chimney of the new fireplace. The guys also
gave the old front of the store a hair-cut of sorts by removing
the overhang in preparation for adding a new roof over the cement
porch. – Beth 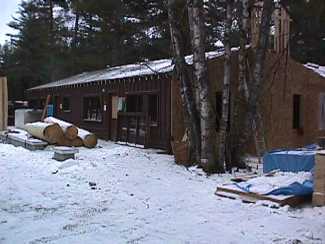 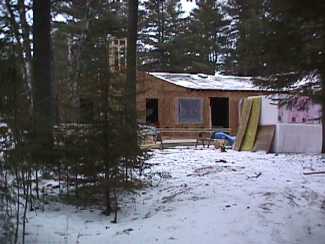 12/04/01 – Not only were we lucky enough to have
a sunny day yesterday, but we also had a magnificent sunset. I
caught a glimpse of the bright pink and purple clouds from the
office and hustled down to the lake, hoping the show wouldn’t be
over by the time I got there. I caught the last of the sunset and
also found OB down at the lake. He was at Sawbill working on the
new sauna and decided to see if the lake was ready for the first
skate of the year. He checked the ice, found almost 3" and
declared it ready to be skated on. I didn’t have skates but
skidded around on the ice in my boots. We were able to make it
around the point and to the spot where the Forest Service has
their dock before the ice got too thin to continue. It looks like
we won’t be able to skate again for a couple of days. Its over 40
degrees today and the ice is starting to melt a bit. – Beth 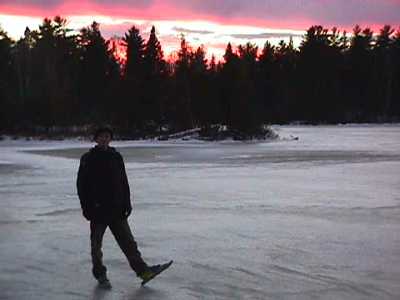 12/03/01 – The sun finally came out today – we’ve
had over a week with gray, cloudy skies. It was glorious to see
the rays of sunshine coming through the window this morning. Its
going to be warm today (probably mid to high 30s) and already the
snow on the tree branches is falling in clumps. Over the weekend,
some otters were enjoying the snow by sliding down the road. We
only saw the tracks left by their fun – about two feet of paw
prints and then another couple feet of belly slide marks, then
more paw prints and another slide. There’s a continuous line of
tracks for probably a quarter mile along the Trail. The otters
weren’t the only critters to go sledding this weekend. Yesterday,
Homer convinced Carl and Clare to go sledding as well. Sunnie
tried to join in, but she’s much happier watching than riding. -Beth 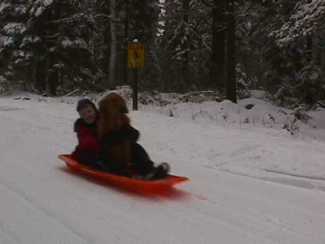 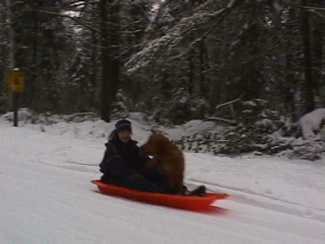 Homer scouts out the route for Carl. "Hey
Clare, how about a little faster?"

12/01/01 – After a full day of outdoor fun,
nothing feels better than a hot, steamy sauna. Luckily, the
Hansens are adding one to their back deck. Andy and OB (yes,
longtime Sawbill crew member OB) are making great progress on it.
In fact, Andy is even here today, on a Saturday, to work on it.
Wonder where OB is? It’d sure be nice if he was here, helping
Andy today so that we could fire that thing up even sooner. 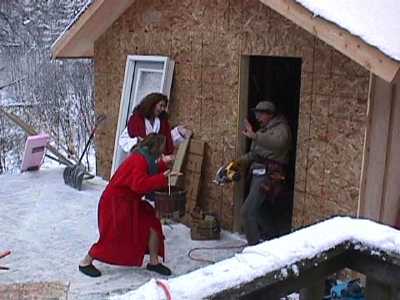 As its the first day of December, we’re all in
the Christmas mood here at Sawbill. Decorations are going up and
John Denver and the Muppets are singing Christmas carols on the
radio. A few weeks ago Cindy’s mom and sister Sherrie, along with
her two kids, Will and Anna spent the weekend here for their
annual Christmas cookie making marathon. Everyone joins in and,
as Bill puts it, "is forced to make Christmas cookies until
our ears bleed". The fun starts on Friday night and doesn’t
end until Sunday with hundreds of cookies piled everywhere around
the house. – Beth 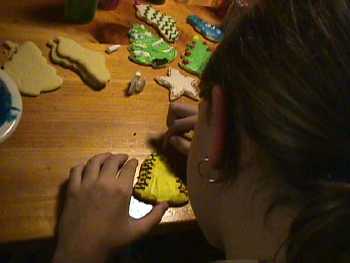 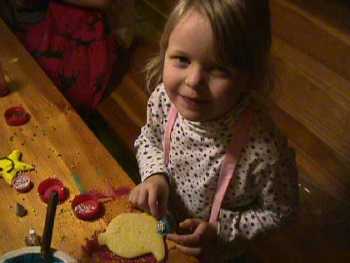 Details are very important when decorating.
Clare, with years of experience, carefully trims the edge of the
bell. Anna is mastering the art of tiny silver ball placement. 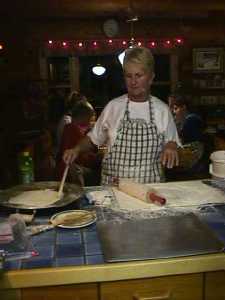 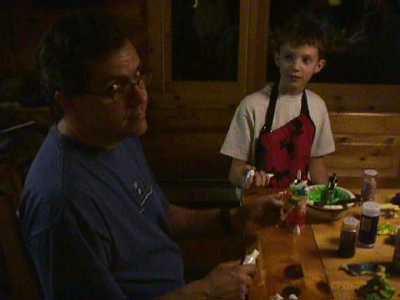 Cindy’s mom Arline wishes she could make lefse
every weekend. Bill shows off his decorating skills as an
obviously impressed Carl looks on. 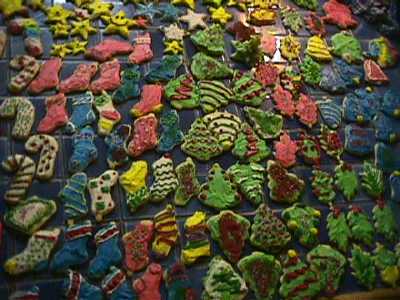 The Final Masterpieces (and this is only ONE
section of them)