1/31/02 – We received the following email from
the Forest Service. This would be a great opportunity for some
one with the summer free. They do pay a per diem to cover the
cost of food.

We just found out the two volunteers we had lined
up to spend the summer at
the Kekekabic Cabin in the BWCAW can not make it. I’m putting an
ad in
the Ely Shopper and was hoping that you knew of some potential
volunteers
or ways of getting a recruitment notice out. The volunteers would
be
responsible for routine campsite and portage maintenance as well as
some user
education contacts in the Kekekabic and Knife lakes area.

Thanks for any help you can give getting this message out.

I need a title for this poem as I can’t think of
a good
one for it. Could you post it on the newsletter and let the
readers submit
ideas for a title?

That early coffee smell,
before it begins morning hike
with campfire smoke through towering pines,
breaks grip of night sleep,
drags me from tent,
grants permission for this lake canoeing day
to burn wild over water trails
until I succumb to temptation
of warm sleeping bag
after watching another sunset
fade deep into the horizon.

Have a good one,
Ed

1/21/02 – Another ex-Sawbill crew baby to
announce: Will Pearson is the new son of former crew Ann Pearson
(Strittmatter) and Marcos Pearson. They currently make their home
in Nicaragua. 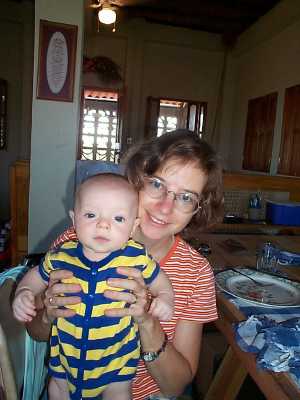 Future Sawbill crew member? Will Pearson and his
mom, Ann.

1/18/02 – Just when I think all the dramatic
changes on the construction project are finished, the carpenters
find something else to do that makes everyone’s jaw drop. This
week they removed the wall that separated the offices from the
store along with the ceiling timbers in that area. All of the
paneling and insulation had been removed from the wall and only
the frame was standing so it didn’t seem like it would be that
drastic of a change. But what a difference – the area seems so
much larger than I expected. I’m sure we’ll have no problem
filling it up with all the equipment from the dome.

Last weekend, four former Sawbill crew members –
Sandy Zinn, Ellen Bagnato, Annie Strupeck, and Michelle Thieman
came up for their annual girls ski weekend. They were limited to
skiing around the campground, since there is no snow on any of
the ski trails along the North Shore. But they made the best of
the snowless north and did some hiking on the Superior Hiking
Trail as well as spent lots of time chatting over coffee. We also
had a short visit from current Sawbill crew member Shannon Grace
who stopped by Sawbill with her family last sunday. She is on
winter break from the U of M. 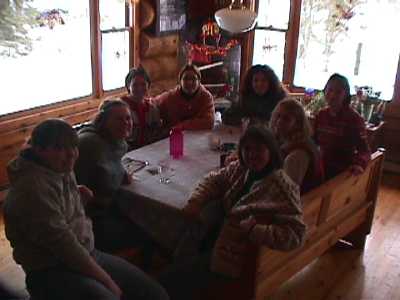 The Sawbill Babes having coffee.

A cold spell has hit us hard today. The low last
night was -15 degrees and its hovering around zero right now.
Reading the thermometer makes it hard to get myself motivated to
go for a little ski, although I can see the beginnings of a
beautiful sunset which sometimes tempts me out of the house.
Today though, I think a book and some hot chocolate sounds like
the better option. – Beth

ON SECOND THOUGHT
AT THE BREAKFAST TABLE

The article took up half the front page of the morning paper but
it was the
colored picture that told the story. Eleven big trailers, packed
with
snowmobiles, tools, spare parts, clothes and who knows what else,
parked
side by side, out behind a motel in Detroit Lakes, on lake ice
that was
obviously not thick enough. The perfect opportunity for my wife
to say
something like "There’s no law that says you can’t be
stupid." which would
have been a clear reference to our first and only trip to Las
Vegas where,
while under the influence of a rare vintage burgundy from France
(I kept
telling her that they don’t grow grapes like these back home in
Minnesota) I
became convinced that the biggest pile of poker chips I had ever
seen in my
life would "come home too Ma Ma" (how was I to know
that a pair of ladies
would let me down when they had always seemed to work back home,
on Saturday
night down at the VFW). But she just sipped her coffee, knowing
quite well
that if she brought up the subject I would have to remind her of
all those
cases of County Fair pickles we still have down in the basement,
and she
smiled, sweetly, asking if Warroad had beaten the Falls in hockey
last
night.

Have a good one and do pray for some snow,
Ed

1/10/02 – Here is the latest update on the
rebuilding of the Sawbill store. This view is from the front. In
other words, this is what you see when you turn right at the stop
sign and drive up toward the parking lot. This will now be the
"side" of the building and the front will be off to the
right. This will all make more sense when the landscaping is
done. 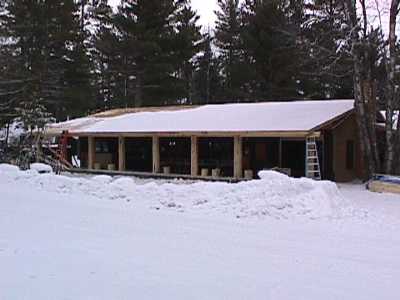 We are experiencing the same "super
melt" as the rest of the Midwest. Two days ago the high
temperature was 37F and yesterday was 36F. Our foot of snow,
which was the deepest in the state, has shrunk to 6" or
less. I was forced to go running because even the sketchy ski
trails that I have been skiing are ruined. I hope to be able to
ski on the lake once the temperature drops to normal levels. –
Bill

1/4/02 – One of the carpenters working on the
store reconstruction, Hans Mueller, left his lunch box here for
almost two weeks over the holidays. When he returned, we
discovered that he had left a large chunk of ham in the lunchbox.
It had achieved an impressive array of colors while lounging in
our front hall closet. Fortunately, Hans’ lunchbox has a tight
seal. Today is Hans’ 39th birthday. Cindy, never one to let an
opportunity pass, baked him a cake in the shape of a spoiled ham.
It actually tasted quite good, despite the putrid appearance. 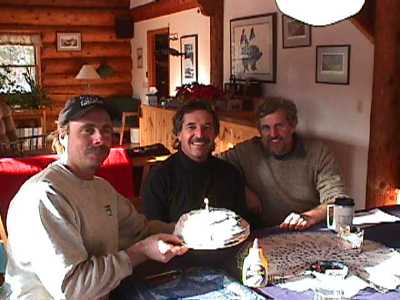 Sawbill campground hosts, Jim and Rachel
TerBeest, paid a rare winter visit to Sawbill today. They are
vacationing at Bearskin Lodge on the Gunflint Trail and stopped
over for a tour of the construction and dinner. 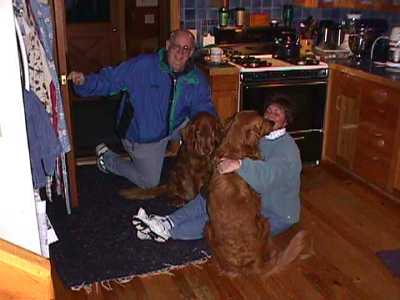 Jim looks on as Homer plants a wet one on
Rachel.