9/27/02 – The Forest Service announced yesterday
that the partial fire ban that had been in effect for much of the
summer has been lifted. Campfires within designated firegrates
are now allowed at anytime throughout the entire BWCAW.

9/25/02 – Each day brings a little more fall
color to Sawbill. The leaves are still about a week away from
being at their peak. The past few nights have been chilly with
the thermometer dipping just below the freezing mark. Today has
been a cloudy, drippy day. For a brief period we even had some
sleet coming down. Lots of hats and mittens have been pulled out
of the closet today. 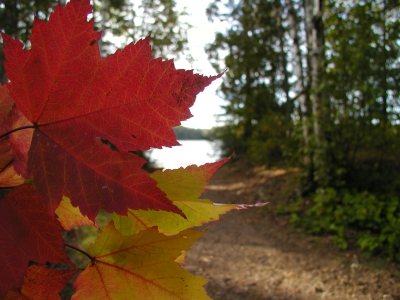 9/23/02 – We have sorted and priced a good
selection of our used equipment. You can shop at Used Equipment For
Sale.

9/18/02 – A final breath of summer drifted our
way yesterday and the cloudless sky warmed the day into the 70s.
The clock loudly ticked its way to 3:00, quitting time for me,
and I felt like a kid waiting for the final school bell to ring.
I rushed out the door of the store, grabbed a canoe, and headed
for the lake. I had no destination in mind. Distance wasn’t the
goal, just being on the lake was. I paddled my way across the
lake, found a sheltered bay and just floated. My skin wanted to
re-live the suntan it had in July and soaked in the rays. I
drifted along the shoreline and startled a Great Blue Heron. It
gave me a look and launched itself into the air, flying almost
directly above me. I paddled a bit more, racing a cluster of
water bugs scooting their way along the lake’s surface. As I
headed back in, a solitary loon floated in the middle of the
lake. His impending flight south seemed to be far from his mind
on this lazy summer-like day. -Beth

9/15/02 – Former crew members Eric Frost and Dave
Freeman are beginning a new adventure for the educational program
they have founded, Wilderness Classroom Organization. Last fall,
the pair canoed the entire Mississippi River and had school
classrooms following and interacting with their trip. This fall
takes them on the Jiime Adventure (Ojibwa for "to go by
canoe") where they will paddle from Thunder Bay, Ontario all
the way to Lake Winnipeg, following the routes of the Voyageur
fur traders. This winter they will continue the journey via sled
dogs and snow shoes on the Bimaadagaako Adventure (Ojibwa for
"to walk along on the ice"). You can find out more info
on their website, www.wildernessclassroom.com.
Their trip begins tomorrow and they are up here at Sawbill taking
care of some final details. – Beth 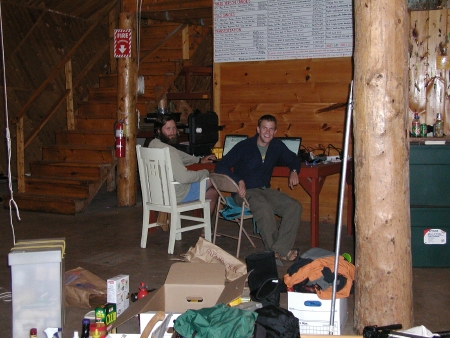 Frosty and Daver at Command Central in the
Dome.

9/14/02 – There’s a dying jack pine behind the
store building which has been a big attraction for a black-backed
three-toed woodpecker lately. The woodpecker, which is only found
in northern boreal forests and isn’t often seen around here, is
about the size of a hairy woodpecker but has solid black color on
its back and no red on its head. The woodpecker angles its head
to the side and chips off the scaly bark of the jack pine in
search of juicy insects. He must have found some tasty ones since
we saw him for a few days in a row chipping away at that tree.
-Beth

in the oak forest

We’ve had a number of calls inquiring about used
equipment and canoes for sale. It will be a couple of weeks yet
before we’re ready to start selling anything. We’ll post it on
here when the time comes and it will likely be late September –
early October before we’ve got things ready to go. -Beth

9/11/02 – I am very sorry to report that it
appears I have lost the election in my race for the Minnesota
House of Representatives to my opponent, David Dill. The votes
haven’t all been counted yet, but it seems likely I will lose by
about 200-300 votes with more than 10,000 votes cast.

Looking back, I wouldn’t do anything differently.
I had wonderful backing from my family, a great election
committee, hundreds of volunteers, more than 600 contributors,
strong support from the DFL Party, organized labor, environmental
groups, and thousands of my friends and neighbors. We ran a
clean, honest campaign that focused on the issues. Elections are
often a matter of luck and timing. I had good luck, but my timing
was slightly off.

My heartfelt thanks to all of you who contributed
in one way or the other. This has been a great experience for me
and I am much the richer for it. – Bill

9/10/02 – Today is a busy day around here. Our
annual group from Carleton College came off the trail today,
which kept us hopping all morning.

Today is also primary election day in Minnesota.
As most of you know, I am running for the Minnesota House of
Representatives. If I survive the primary election today, will
represent the Democratic, Farmer, Labor Party in the general
election on November 5th. I am nervous and confident at the same
time. The campaign has gone very well, with party endorsement,
labor endorsement, and help from many fine public servants, not
the least of which is U.S. Senator Paul Wellstone. I have had
over 500 contributors and volunteers working hard for the last
three months, all pointing toward this day. In this district, the
Democrats are the majority, to the primary election is very
important. I am humbled and gratified to have had so much
support. Win or lose, it has been a great experience so far. I
will post the election results here tomorrow morning sometime.
Wish me luck! – Bill

9/3/02 – We were enjoying a relaxing afternoon in
the store yesterday, as most people had headed back home from the
Labor Day weekend and there was a nice steady rain playing its
music on the metal roof of the building, when an unexpected
lighting bolt and clap of thunder sent everyone a flying a few
inches off the floor. Once the hairs on the back of our necks had
settled down, we realized that the phone lines weren’t working
and neither were the computers. That’s right – we had been hit by
lightning AGAIN. This time it seemed to take out everything it
left the time it hit earlier this summer. We had power, but no
phones and the computers were fried. The phones are back up today
but our modem was blown out, so it may be a few days before I’m
even able to post this entry on the website. If you’ve sent an
e-mail it may be a few days before you receive a reply. The most
frustrating thing is that the inverters that were blown out when
we were hit in August were minutes away from being replaced by
new ones that had been hand built by Chad, one of the guys
responsible for our power system here at Sawbill. The new
inverters were hooked up for a test run when the lightning hit
yesterday and were blown out before ever being used.

Crew members Eric Frost and Max Wilson left
today, as well as Sawbill campground hosts Fran and Jim Sampson
and Crescent campground host JoAnn Koski. Well, almost all of
them left. Max Wilson tried to leave but was unsuccessful in his
attempt. For the second year in a row. Last fall when he left, he
got to the end of the Sawbill Trail and his car kept stalling. He
stopped by Randy’s (Sawbill’s favorite mechanic) in Tofte and
discovered that there was diesel fuel mixed in with his gas. A
few hours later, he was back on the road. Today, he started his
long drive back to Massachusetts around 9AM and by noon he was
enjoying lunch right back here at Sawbill. When he reached the
end of the Sawbill Trail this morning, his brakes quit. He again
stopped by Randy’s and was told this time it would be a few days
before he could get back on the road. So he warmed up his thumb
and headed back up the trail. Luckily crew member Pete was
returning from town and picked up the shady looking character,
pillow case and all. 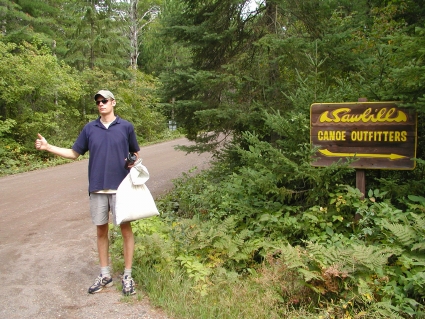 Anyone heading towards Lexington, Mass.?

9/1/02 – A busy Labor Day is in full swing and
the highlight of the weekend has been celebrating Mary Alice’s
79th birthday today. Candles were lit, the song was sung, and
huge pieces of cake were devoured. 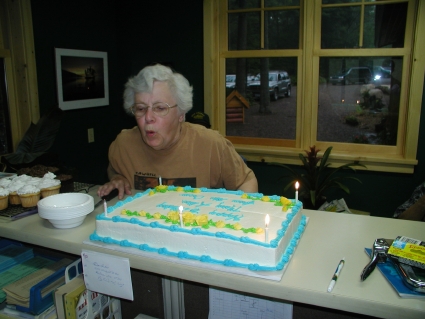