11/30/02 – Tim Velner and Gus Gustason, Duluth,
spent the Thanksgiving weekend camping in the Sawbill Lake
campground. This is an annual tradition with them, including many
more specific traditions. One of those is the Sawbill Bowl
football game, usually played on the lake, but this year on the
unplowed parking lot due to slush on the lake. Other traditions
include mountain biking on area lakes with studded tires, beer
kept from freezing in a cooler with hot water bottles, and
drinking good scotch with Frank. 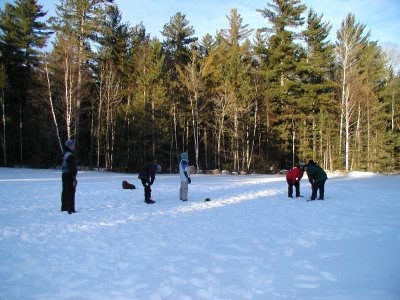 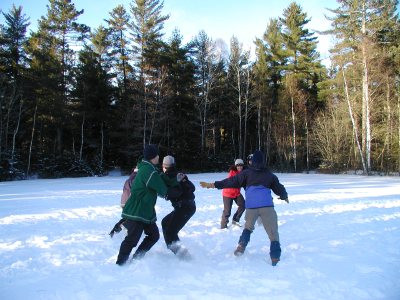 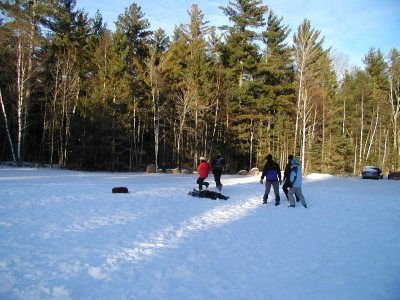 Carl is flattened by aggressive blocking.

11/26/02 – This past weekend was the annual
Christmas cookie making frenzy that Cindy, her mom, and her
sister have been doing for many years. Cindy’s sister was unable
to come up this year and we discovered that her presence is
essential for successful cookies. The first batch (a batch being
SIX times the single recipe) of spritz cookie dough was as hard
as a rock and tasted an awful lot like paste. We quickly disposed
of this and made more. The dough appeared fine this time, but
when we were adding food coloring to the dough, we somehow ended
up with two batches of red instead of one red and one blue – so
we decided purple cookies would be festive. When we baked the
cookies, they had an odd sort of texture (some of the cookies
shapes look more like modern art than cookies). The sugar cookies
never got vanilla added to them and the cookies that have been
nicknamed SOB’s (yes, the initials stand for what you think – the
cookies are a bit tedious to make) were under-cooked. But we just
filled up our wine glasses and took it all in stride. So, if you
stop by Sawbill this holiday season and are offered some cookies,
be careful what you choose. -Beth 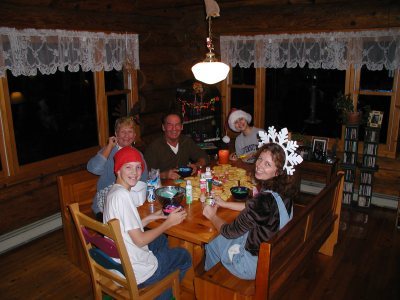 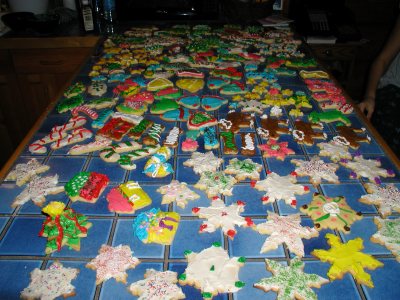 On your mark, get set, decorate! Clare, Cindy,
Carl, Cindy’s mom Arlene and her husband Keck prepare for a
cookie decorating marathon. We decided not to post the picture of
Bill being dragged, kicking and screaming, to the table for the
decorating. On the right, the final results.

11/23/02 – There’s just the right amount of snow
on the ground to find out what’s been roaming around in the
woods. The snow is deep enough (about 4") to record the
footprints of all the critters, but shallow enough to make it
easy to get through the woods without snowshoes or skis. I walked
along the lake yesterday and saw tracks along the hillside,
tracks heading straight for trees, and many tracks leading down
to the lake in search of water. Birds, squirrels, mice, and
snowshoe hares had all been recent visitors. I also came across
the wing marks of a ruffed grouse that had left its imprint as it
flew away. -Beth 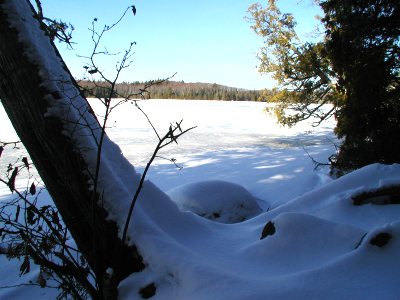 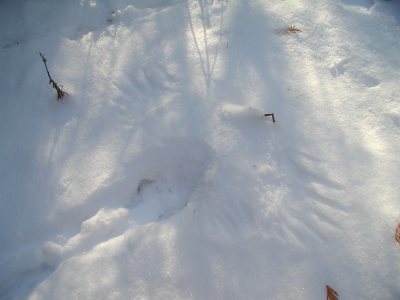 Winter has arrived at Sawbill – a solidly
frozen lake. A snow angel made by grouse wings.

11/22/02 – Returning from two busy weeks in
different cities riding planes, trains, buses, and subways makes
me pause and soak in what winter at Sawbill can be like. Where an
unfamiliar car in the winter is rare and prompts a lengthy
conversation on who it could possibly be. Where coffee breaks
include ice skating. Where a busy social life means I had more
than one mouse in my living room at a time (Yesterday a huge fat
mouse was just sitting in the middle of the living room staring
at me – have the mice gotten so arrogant in my absence that they
think they can just lounge around the living room, or was this an
act of surrender? Either way, he was quickly relocated deep into
the woods). When you live in a place where many people come on
vacation it seems ironic to leave there to go on vacation. But it
sure makes coming home a treat. – Beth

11/18/02 – Jim Sampson, campground host at the
Sawbill Lake Campground, is having knee replacement surgery
today. Jim and Fran are long time Sawbill campers (~ 50 years)
and their daughter Dee was one of the first Sawbill employees
back in the early ’60s. Dee’s husband, Steve Hedman, also worked
here. They were the first Sawbill romance that resulted in
marriage. Jim and Fran’s address is: 324 Lakeview Dr, Osteen, FL
32764. Phone: 407-323-9425. Email: Samps32764@worldnet.att.net
if you would like to send get well wishes.

I just read your
newsletter entry about lynx in your area.  I was driving to
Sawbill in September and, about a mile from your store, I saw an
animal cross the road in front of me.  I stopped the car and
looked into the trees on the side of the road and there was a
large cat, perhaps 25 feet away.  We stared at each other
for a long time.  He didn’t seem very afraid.  I
assumed he was a bobcat because I didn’t see pronounced ear
tufts, but now I am having doubts.  Had I a zoom lens on my
camera, I could have taken some nice pictures.  As it was,
this is all I was able to get. –
Jeff Thieret 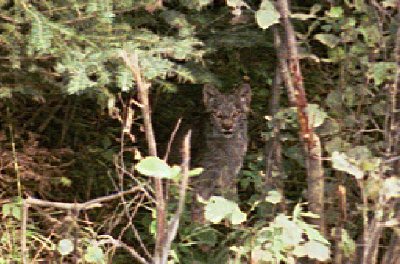 11/09/02 – John "OB" Oberholtzer, who
worked at Sawbill for 13 years, called last night from St Johns,
Virgin Islands. This was surprising in itself, but all the more
surprising when he announced that he had married Kathleen Heikes
that morning! We are delighted for OB and Kathleen and wish them
all the best. We are also slightly jealous about the next 8 days
they get to spend on St Johns.

11/07/02 – Canadian Lynx are very rare in this
area. At least they were until recently. We had a great lynx
sighting on the way to school late last week. We saw is cross the
road near a river crossing. We were less than 100 yards away and
got a good look at the big cat. We stopped abreast of where it
had gone in the woods, and there it was, less than 20 feet away
and in plain view. We were able to watch it for about five
minutes before it ambled off. It was the first lynx I have seen
since I was a little kid, more than forty years ago. For more
lynx info, follow this link (sorry for the pun): http://www.nhptv.org/natureworks/lynx.htm.

Former Sawbill crew member, Kate Ferguson-Surbaugh
saw a lynx in her back yard about a month ago. She was brushing
her hair and spotted the lynx in the bathroom mirror. She watched
it for 20 minutes. Kate, her husband Steve (also a former
crew member), and their son Will, have recently relocated from
Minneapolis to Grand Marais. – Bill