11/28/05 – Carl and I had a cool nature moment yesterday. We went for a ski up the lake just before sunset. About half a mile up Sawbill we crossed a set of animal tracks. It was a deer, closely followed by a wolf. A little farther on, we saw the same set of tracks crossing back across Sawbill toward Alton Lake. When we entered the bay heading for the Sawbill to Alton portage, we saw them again. We followed them and could see that the deer was slipping on the lightly snow covered ice. We could also see where it kicked back at the wolf. At the shoreline, the deer leaped over a fallen tree and the wolf carefully picked its way around. 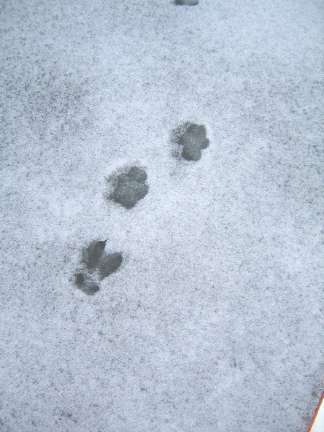 Deer and wolf tracks on Sawbill Lake after 12 hours of rain and thaw.
We headed over to Alton, hoping we would catch a glimpse of them. When we reached the end of the portage, we saw the deer, dead, about a quarter of a mile straight out from the portage. We skied out and picked up the trail to read the story of the deer’s last moments. There was no blood on the snow, so the wolf wasn’t biting the deer’s back legs. The deer fell twice and then fell the third time for good. By the time we got there, the wolves had opened the deer and eaten a few choice organs. There were no obvious bite marks on the rear legs. The deer’s neck fur was disturbed, but no blood there.

The deer’s eye reflects the cycle of life and death – prey and predator.
Two ravens lifted from the carcass as we approached. It is well documented that ravens and wolves cooperate in hunting. The wolf tracks showed that a second wolf had joined the first at the kill from the point to the south. Both wolves walked back to the point, probably when they heard Carl and I coming. 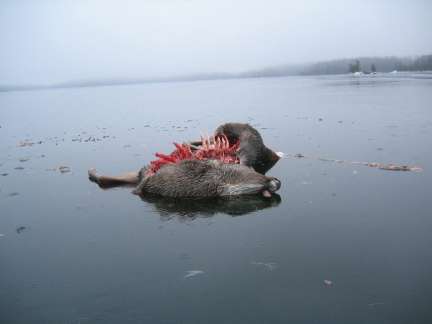 By the next morning, the wolves had eaten all the vital organs, most of the ribs, and all the back meat.
We didn’t have a camera with us, so I skied out this morning early to revisit the scene. It rained quite a bit overnight with temperatures well above freezing, so the lake ice had degraded. I had to ski through either a few inches of slush, or a few inches of standing water. On Alton, the ice was so black and clear as to be nearly invisible, giving me the illusion that I was skiing on open water. My heart was in my throat a few times as I could feel the ice sag beneath me and watched cracks shoot out from under my feet. 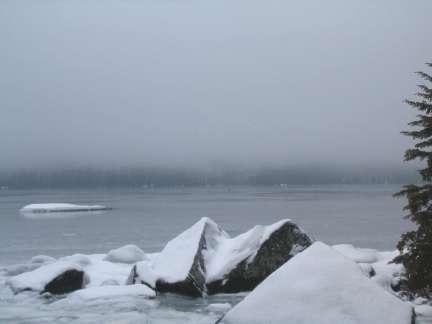