4/7/05 – What a beautiful day! It froze last night, so I snapped on my skating skis this morning and took advantage of a smooth, fast lake surface. The ice is about 20″ thick overall, but has a 6″ layer of slush ice on top of the solid lake ice. There is a layer of water between the slush ice and the lake ice which results in a very disconcerting hollow sound when you ski on it. By 11:30 a.m. I was starting to break through the softening top crust. I turned around, but not in time to avoid a high speed crash when my skis broke through into the soft under-layer. This brought me crashing down hard face first on the abrasive and unforgiving ice surface. I’ll have a few bruises, but it was well worth it, as you can see from the pictures below. – Bill 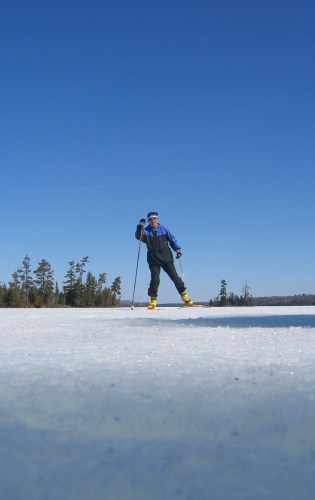 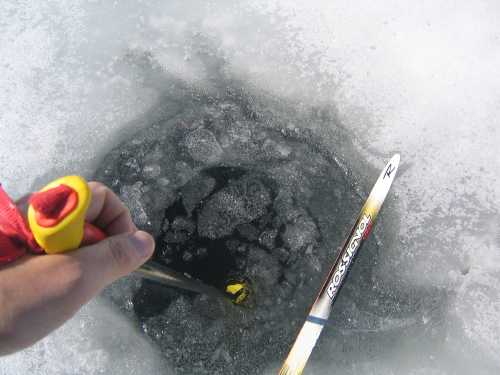 The lake is scattered with these naturally occuring holes. They form when standing surface water finds its way down a crack and gradually erodes the ice as it drains into the lake. The ice is sound right up to the edge of these holes. 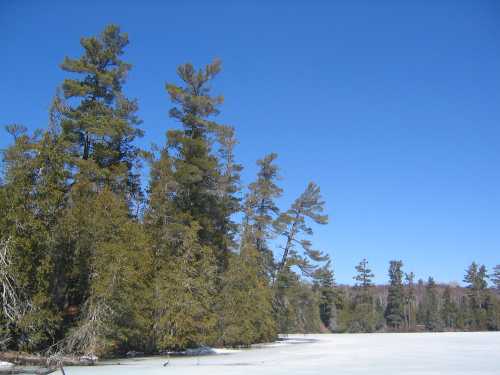 There is nothing in this world as fine as looking at majestic white pines, against a clear blue sky, with the sun warming your back.

4/6/05 – We are in the eleventh day of a serious warm spell. Sunday before last, we had more than three feet of snow on the ground. We are now down to less than a foot. The lake ice is still solid, but it has degraded fast in the last week. If the 10 day forecast is accurate, we will be losing all our snow and perhaps even the lake ice within the next few weeks. Anything can happen with good old Minnesota weather though. – Bill 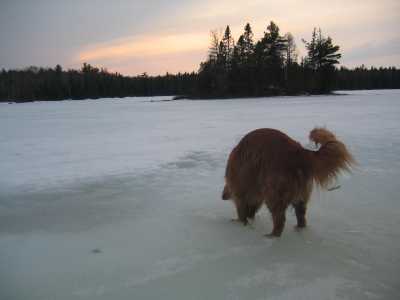 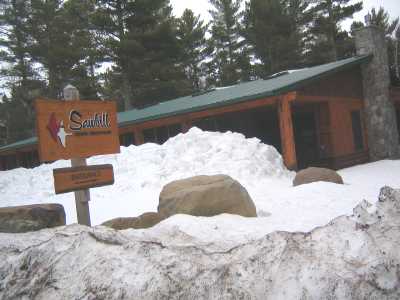 The store’s metal roof has shed its snow, creating a snowbank that should last well into May.

4/5/05 – A big thanks to Dave Freeman and Adam Hansen for their excellent work in overhauling this website. If you normally come straight to this page, take a tour around the whole site. They have added a lot of good information and beautiful pictures. Great job guys.
Adam and Dave are deep in the upper Amazon basin of Peru on their latest Wilderness Classroom adventure called Project Peru (their other job when not working at Sawbill). You can get updates on a nearly daily basis as Dave and Adam explore the amazingly diverse and biologically rich Amazon rain forest. 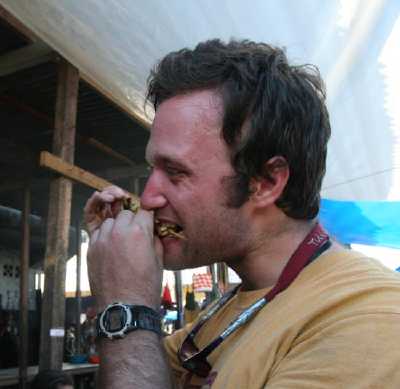 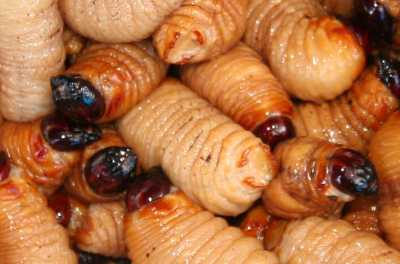 3/28/2005 – Sawbill has a new website! We are pleased to offer an expanded online route guide, more fishing tips and tricks, maps, books and used equipment for sale, and much more.
For loyal readers of the newsletter, don’t worry! We will continue to post Sawbill related news and pictures in this space.
We hope you like the changes, and look forward to seeing all of you in canoe country this spring/summer/fall!

3/26/05 – Former Sawbill crew members are having babies on a nearly weekly basis. Kate and Steve Surbaugh, who worked here in ’95 and ’96, welcomed their second son on Sunday, March 20th. Tristan James was born right here at our own Cook County North Shore Hospital within less than an hour of arrival at the hospital. He weighed 7 lbs 2 oz and measured 22.5″. 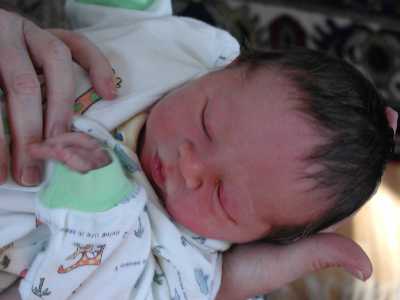 3/22/05 – Stunningly beautiful late winter/early spring weather has been with us for nearly a week. They days are in the low 30s with a warm sun in a crystal clear blue sky. The snow is sparkling white and perfect for skiing. The nights are in the single digits with a waxing moon high in the star filled sky. Perfection.

Sawbill crew members Dave Freeman and Adam Hansen are poised to begin their adventure in the wilds of Peru. “Project Peru” is the latest adventure from Wilderness Classroom. In cooperation with Chicago’s Shedd Aquarium and their famous Amazon Rising exhibit, Dave and Adam will paddle dugout canoes through Peru’s most remote section of flooded forest in April and May of 2005. During the six week learning adventure, they will update their Wilderness Classroom website with videos, photos, scientific data, journals, and much more. They will begin posting to their website on March 28th.

Over the weekend we had a nice visit from former Sawbill crew member Ellen (Lock) Bagnato, her husband Greg, and their son, Taj. The Bagnatos are soaking up as much winter fun as they can before they move to the middle eastern country of Oman in August. Greg will be teaching and Ellen counseling at an American school there for a minimum of two years. 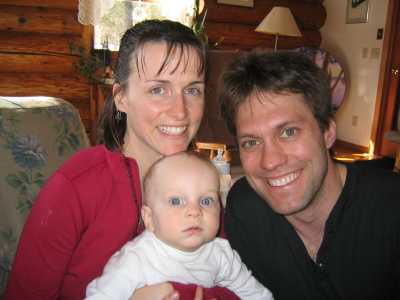 Ellen, Taj, and Greg Bagnato, fresh from the ski trails.

The barred owl that we saw at our feeder a couple of weeks ago has become a regular visitor. It sits for hours in the trees above the feeders and appears to be dozing. Every so often though, it perks up, and dives on a passing rodent. We haven’t actually seen it catch anything, but we did see it attack a careless red squirrel. After a quick flurry of feather, claw, fur, and snow, the squirrel popped out of the fray and beat a hasty retreat. We routinely have about a dozen species of birds that come to our feeders, but this is our first regular owl.

I spotted a Northern Shrike yesterday. The northern shrike is known also as the butcher bird due to its unusual practice of impaling prey on thorns or barbed wire, much in the way butchers hang up meat in their shops. Mice, other birds, and large insects form the bulk of the shrike’s diet. Its plumage is a soft, silver-grey, with dark brown, almost black, wings and tail. The northern shrike is found in Europe, Asia, and northern Africa, and ranges across Canada from coast to coast. It winters in the more southerly parts of this country. It has a well-developed song of its own and is capable of imitating the songs of several birds. I usually see a couple of them every spring and fall. – Bill

3/13/05 – We had an interesting visit this weekend from Brian and Heather Schenck, who are distributors for Ozone Snow Kites. They came to Sawbill through our friend Jeff Knight, one of the owners of Granite Gear. Granite Gear is a great pack (and other products) manufacturer located in nearby Two Harbors, Minnesota. Heather and Brian taught us how to fly the powerful kites, demonstrated the fun that can be had with them, and got us started on riding kite powered snowboards and skis across Sawbill Lake. Snowkiting is a fast growing sport that derives from kite boarding, which is done on open water. – Bill 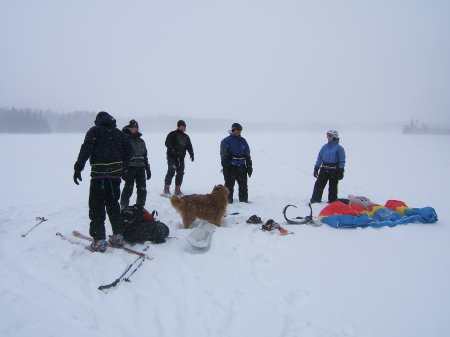 We prepare to launch large power kites on a windy Sawbill Lake. 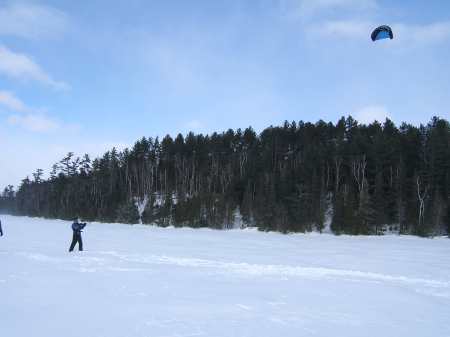 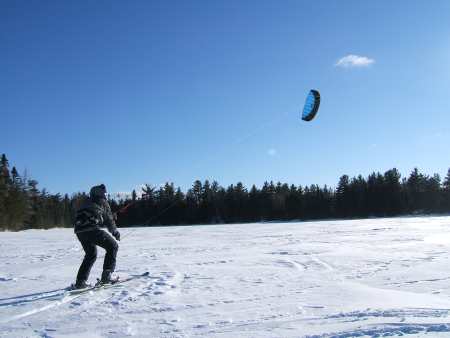 A skier takes off at high speed across the lake. 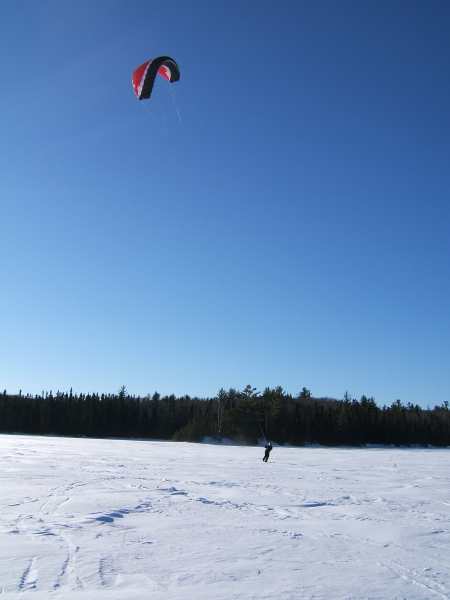 The kites look beautiful against the clear, blue sky. 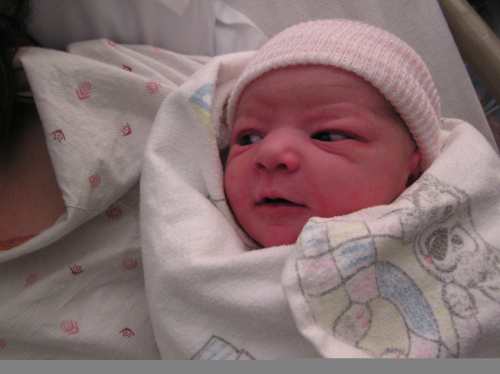 Former Sawbill crew member Kathy Heltzer sent along this link to her 2002 canoe trip. She wants these pictures publicized to reverse her reputation for not catching fish!

Paul Grizzell, a frequent Sawbill camper, led Venture Patrol Boy Scout Troop 559, from Woodbury, MN, on a winter camping trip to Alton Lake a couple of weeks ago. They enjoyed crisp weather with temperatures dropping to near -20 F at night. 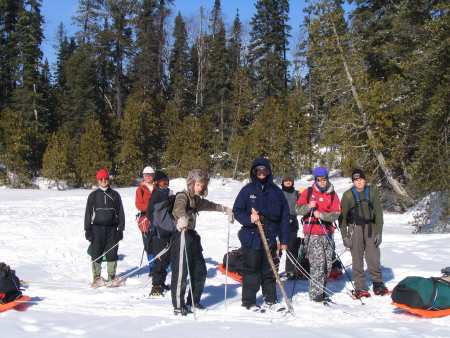 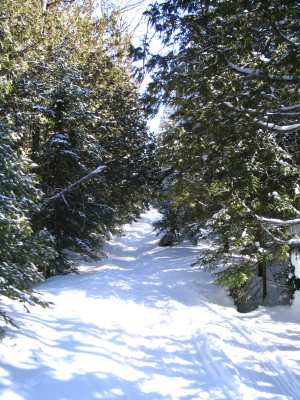 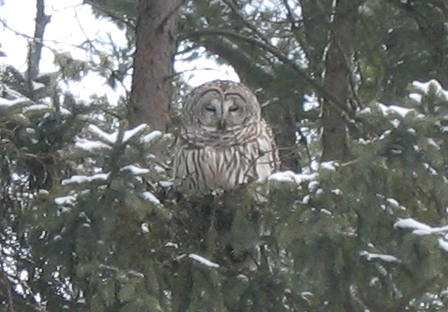 2/16/05 – The Hansens are off for some skiing and snow boarding in British Columbia this week. Former Sawbill crew member Jeff Green will be taking care of business while we are gone. Jeff will be manning the office for the week, in between feeding the dogs and shoveling snow. I’m sure he’ll find time to fire up the sauna from time to time too.

Winter has returned to Sawbill after a couple of warm spells. We received a nice, fresh snow fall to make the trees beautiful again. The temperatures are dipping down near zero at night and staying well below freezing during the day. The local cross country and downhill ski areas are in prime condition. You can see trail updates for the Sugarbush Trails (accessed from the Sawbill Trail two miles north of downtown Tofte) and snow reports from Lutsen Mountains, our fine local downhill area.

Speaking of weather, we have been invited to submit little weather comments to Cathy Wurzer, host of "Morning Edition" on the Minnesota Public Radio network. Sawbill often has interesting weather and she will occasionally use that fact as part of her daily weather reports.

There is a bit of radio history connected to our weather here at Sawbill. Back in the ’30s through the early ’60s, Sawbill Lodge (our neighbor, now out of business) was owned by an interesting woman named Jean Raiken. Jean was an amateur radio operator who had a regular morning schedule (via morse code) with a fellow operator in Minneapolis. She would often report unusual weather to her friend, who in turn would call it in to the famous Boone and Erickson morning hosts at WCCO Radio. WCCO’s reports of the weather at Sawbill Lodge became a bit of a regional cult hit and were pretty famous at the time. – Bill